Alton Glenn Miller (March 1, 1904 – missing in action December 15, 1944) was an American big band musician, arranger, composer, and bandleader in the swing era. He was the best-selling recording artist from 1939 to 1943, leading one of the best known big bands. Miller's notable recordings include "In the Mood", "Moonlight Serenade", "Pennsylvania 6-5000", "Chattanooga Choo Choo", "A String of Pearls", "At Last", "(I've Got a Gal In) Kalamazoo", "American Patrol", "Tuxedo Junction", "Elmer's Tune", and "Little Brown Jug". During World War II, he led bands in the U.S. Army. While he was traveling in France during World War II, Glenn Miller's airplane disappeared over the English Channel.

Miller was born in Clarinda, Iowa. His parents were Mattie Lou (née Cavender) and Lewis Elmer Miller. In 1915, Miller's family moved to Grant City, Missouri, and he started playing in the town orchestra. At first, he played cornet and mandolin, but he switched to trombone by 1916. In 1918, the Miller family moved to Fort Morgan, Colorado, where Miller went to high school. During his senior year, he started a band with some classmates. They played "dance band music". By the time Miller graduated from high school in 1921, he had decided to become a professional musician.

In 1923, Miller entered the University of Colorado at Boulder, but he spent most of his time away from school. He played auditions and gigs. He did not do well in school. He dropped out of school, and decided to start a career as a professional musician. He later studied under Joseph Schillinger and composed "Moonlight Serenade". In 1926, Miller toured with several groups, eventually landing a good spot in Ben Pollack's group in Los Angeles. While playing with this band, Miller wrote several musical arrangements and also co-wrote his first composition, "Room 1411", with Benny Goodman. In 1928, he married Helen Burger in New York City. At first, he was the main trombone soloist of the band. But when another trombone player joined, Miller was given fewer solos. At this point, he decided he should mainly be a composer. In the late 1920s, he wrote and published a songbook.

In the early 1930s, Miller was a trombonist, arranger, and composer in The Dorsey Brothers. Miller composed the songs "Annie's Cousin Fannie", "Dese Dem Dose", "Harlem Chapel Chimes", and "Tomorrow's Another Day" in 1934 and 1935. In 1935, he started an American orchestra for British bandleader Ray Noble. In this band, he featured a lead clarinet over four saxophones. He later used this arrangement in his own bands.

Glenn Miller formed his first band in 1937. The band broke up after playing its last show at the Ritz Ballroom in Bridgeport, Connecticut, on January 2, 1938. 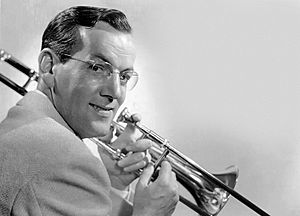 Miller was discouraged and returned to New York. He realized that the band needed to have a "sound" that was different from other bands. He decided to make the clarinet and tenor saxophone play the melody together, while three other saxophones played harmony. Miller hired a saxophonist named Wilbur Schwartz, but instead had him play lead clarinet. This was unique because it did not rely on repeated motifs, like other bands.

Miller had a staff who wrote and arranged songs for the band. They were Jerry Gray, Bill Finegan, Billy May, and George Williams.

In September 1938, the Miller band began making recordings for Bluebird Records. Cy Shribman, a prominent East Coast businessman, began financing the band. In the spring of 1939, the band played at the Meadowbrook Ballroom in Cedar Grove, New Jersey and at the Glen Island Casino in New Rochelle, New York. At Glen Island, 1800 people attended Afterwards, the band became much more popular. The band's recording "Tuxedo Junction" sold 115,000 copies in the first week.

Miller and his band appeared in two films. The first one was Sun Valley Serenade (1941) The second was Orchestra Wives (1942). 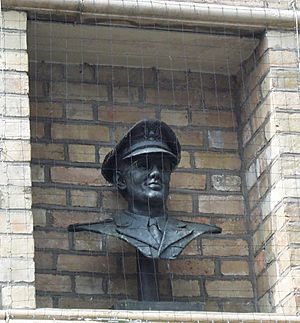 Bust outside the Corn Exchange in Bedford, where Miller played in World War II.

In 1942, Miller decided to join the war effort because he was too old to be drafted. At first, he volunteered for the Navy but was told he was not needed. Miller then wrote to Army Brigadier General Charles Young. He asked to lead an army band so he could entertain the Allied Forces, and was accepted this time. He earned the rank of captain and he was soon promoted to major by August 1944.

He was placed in the United States Army at first, but was then moved to the Army Air Forces. Captain Glenn Miller served as an officer at the training center at Maxwell Air Force Base in Montgomery, Alabama, in December 1942. He played trombone with the Rhythmaires, a 15-piece dance band, both on the base and in the town.

Miller formed a large marching band. He tried to modernize military music. Some officers didn't like it, but he continued because other leaders supported him. For example, he combined blues and jazz with the traditional military march. He formed the Army Air Force Band, with 50 members. In the summer of 1944, he took it to England, where he gave 800 performances and recorded a series of records. The music was used in American Forces Network radio broadcasting for entertainment and counter-propaganda against fascism. Miller also talked on the radio. One time, he said:

"America means freedom and there's no expression of freedom quite so sincere as music." 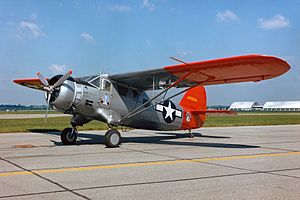 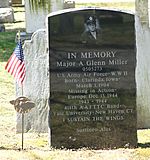 On December 15, 1944, Miller was to fly from the United Kingdom to Paris, France, to play for the soldiers there. His plane departed from Clapham and disappeared while flying over the English Channel. There were two other people on the plane: Lt. Col. Norman Baessell and pilot John Morgan.

There have been many theories about what happened to the plane. According to a 2014 article in the Chicago Tribune, Miller's plane crashed because it had a faulty carburetor.

In February 1945, Miller's wife, Helen accepted the Bronze Star Medal for him.

The Miller estate authorized an official Glenn Miller "ghost band" in 1946. This band was led by Tex Beneke, former tenor saxophonist and a singer for the civilian band. It was similar to the Army Air Force Band because it had a large string section. At first called the "Glenn Miller Orchestra Under the Direction of Tex Beneke", it later became "The Tex Beneke Orchestra".

A film about Miller's life, The Glenn Miller Story, was released in 1953. Because of this, the Miller estate asked Ray McKinley to lead a new ghost band in 1956. This band still tours the United States.

After Miller's disappearance, his Army Air Force band was decommissioned and sent back to the United States. Another band, called "the 314", took its place.

Miller composed at least fourteen songs, both by himself or with other people. He added lyrics to another song. These and other songs were recorded by Miller's civilian bands and his Army Air Force band.

Glenn Miller had three recordings that were put into the Grammy Hall of Fame after he died. This award is for recordings that are at least 25 years old and that have "qualitative or historical significance."

All content from Kiddle encyclopedia articles (including the article images and facts) can be freely used under Attribution-ShareAlike license, unless stated otherwise. Cite this article:
Glenn Miller Facts for Kids. Kiddle Encyclopedia.