Clarinda is a city in and the county seat of Page County, Iowa. It is located in Nodaway Township. The population was 5,369 at the time of the 2020 census.

Clarinda was founded in 1851, and incorporated on December 8, 1866. Many stories are told of such notables as Jesse James frequently passing through.

The town is named for Clarinda Buck, who according to legend carried water to the surveyors while Page County was first being surveyed.

The best known national firm in Clarinda for many decades was Berry's Seed Company, a mail order farm seed distribution business founded in 1885 at Clarinda by A. A. Berry. Berry's Seed Company diversified into retail stores in the 1950s, but the stores were sold off over the following decade, and today the company, known as Berry's Garden Center, operates from its one remaining retail outlet in Danville, Illinois.

In 1943 during World War II, an internment camp designed for 3,000 prisoners of war with sixty barracks and a 150-bed hospital was built in Clarinda. German prisoners were the first to arrive at Camp Clarinda, followed in 1945 by Italian and Japanese POWs.

Camp Clarinda was located by what today is the town's municipal airport, Schenck Field (named for aviator/farmer Ray Schenck, who built the original Clarinda Airport on the location).

Early in its history, Clarinda was served by railroads from 5 different directions - all were predecessors to the Chicago, Burlington, and Quincy Railroad (CB&Q). In 1946, service was lost on the east-west line and the line to Tarkio, MO, through Coin, IA. Service was maintained south of Clarinda until the 1950s and then was trimmed back to a branch serving Clarinda from the main line at Villisca, IA. This line survived a merger into the Burlington Northern but was abandoned in the 1980s. Clarinda now joins a growing list of county seats in Iowa without rail service.

The southeast area of Clarinda was once dubbed "Gun Town" and remains known by that name today. A noted author wrote, "In the twenties and thirties, Clarinda seemed to be two separate towns: Guntown and Uptown. In the middle of the square was, and still is, the courthouse. The four blocks surrounding it are filled with businesses. Guntown was a town all its own. The 700 block of East Garfield was a solid block of businesses--grocery stores, barber, a Chinese restaurant, another restaurant on a corner, a rug factory, a large grocery, the Swifts packing plant, and railroad tracks with freight depot and roundhouse to turn trains around." 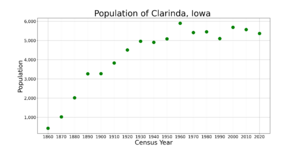 The population of Clarinda, Iowa from US census data

There were 1,928 households, of which 26.1% had children under the age of 18 living with them, 45.3% were married couples living together, 10.2% had a female householder with no husband present, 4.4% had a male householder with no wife present, and 40.2% were non-families. 35.3% of all households were made up of individuals, and 18% had someone living alone who was 65 years of age or older. The average household size was 2.19 and the average family size was 2.80.

NSK-AKS (a subsidiary of the Japanese corporation NSK Ltd.) operates a manufacturing plant in Clarinda that produces ball and roller bearings.

Lisle Corporation, which makes hand tools and garage creepers for auto mechanics, was founded in Clarinda in 1903.

A large mental health center, the Clarinda Treatment Complex, is located on the north edge of the city. It was established in 1884 as the third mental asylum in the state of Iowa.

Clarinda is the home of the Clarinda A's, a summer amateur baseball team. The team won the 1981 National Baseball Congress championship. It has sent several players on to the major leagues, notably Baseball Hall of Fame member Ozzie Smith, who regularly returns to Clarinda for special events. Previously, Clarinda was home to minor league baseball. The 1910-1911 Clarinda Antelopes played as members of the Class D level Missouri-Iowa-Nebraska-Kansas League.

Iowa Western Community College fielded Nationally Ranked junior college baseball teams from 1982 through 1984. Compiling a record of 119 wins and 26 losses during that time, the IWCC Bluejays were nationally ranked as high as 9th in the nation in 1982, ranked 4th in 1983 and the 1984 team was ranked 6th nationally and went to the National Junior College World Series in Grand Junction, Colorado. Coach Jeff DuPre's teams had a total of 10 players drafted during the three-year span and had players continue their college careers at schools such has Arizona State, Nebraska, Illinois, South Alabama, Jacksonville, Louisiana Tech, Grand Canyon State and South Carolina/Aiken. The 1982 to 1984 span also produced 6 All-American players, with George Gonzalez being First Team All American in 1982. The 1982 team set a Junior College record at the time with a .390 batting average. When the IWCC Bluejays went to the 1984 NJCAA World Series they were the smallest school ever to qualify.

Clarinda is located on US Highway 71 and Iowa Highway 2. In the past, both of these highways came through the center of town, but there is now a bypass that takes both highways to the south and east of Clarinda proper. There is also a good network of “farm to market” or county roads servicing the area.

Early in its history, Clarinda was served by railroads from seven different directions - 5 of which were predecessors to the Chicago, Burlington, and Quincy Railroad (CB&Q). The short westbound leg of track connecting Clarinda to Shenandoah was torn up in 1936 due to a washout of the track. In 1946, service was lost on the eastbound leg to Humeston and the line southwest to Tarkio, Missouri, through Coin, Iowa. Service was maintained south of Clarinda until the 1950s and was then trimmed back to a branch serving Clarinda from the main line to the north at Villisca, Iowa. This line survived a merger into the Burlington Northern but was abandoned in the 1980s. The beautiful brick depot in Clarinda still survives and is now the Student Union of Southwest Iowa Community College.

There were two additional shortline railroads that ran to Clarinda. One was the Iowa & Southwestern which connected Clarinda southwest through College Springs to the Iowa-Missouri border town of Blanchard. The I&SW had its own depot very close to the Clarinda CB&Q Depot. It was abandoned before 1914. The second route was the Clarinda and St. Louis Railroad which ran south out of Clarinda roughly paralleling the CB&Q line to the east and terminating Rosenberry, Missouri. This line joined with the Wabash Railroad just a few miles east of the CB&Q line also from Clarinda interchanged with the Wabash in the town of Burlington Junction, Missouri. The Clarinda and St. Louis Railroad was abandoned in the 1899 after only a few years of operation.

Camp Clarinda was located by what today is the town's municipal airport, Schenck Field (named for aviator/farmer Ray Schenck, who built the original Clarinda Airport on the location).

All content from Kiddle encyclopedia articles (including the article images and facts) can be freely used under Attribution-ShareAlike license, unless stated otherwise. Cite this article:
Clarinda, Iowa Facts for Kids. Kiddle Encyclopedia.