Little Falls is a township in Passaic County, New Jersey, United States. The township was named for a waterfall on the Passaic River at a dam near Beattie Mill.

Little Falls traces its first settlement to 1711 when seven Bergen Dutch settlers banded together to begin farming. The Speer Homestead dates from circa 1785 (and may have originally been built in 1680).

The Morris Canal, once an important artery of trade and transportation until 1925 between the Delaware and Hudson rivers, wound its way through the township and vestiges of it still remain., some parts of which are a greenway.

Little Falls was incorporated as a township by an act of the New Jersey Legislature on April 2, 1868, from portions of Acquackanonk Township. On March 25, 1914, portions of the township were taken to form the borough of West Paterson (now Woodland Park).

Singac (with a 2010 Census population of 3,618) is an unincorporated community and census-designated place (CDP) located within Little Falls Township.

Little Falls is bordered by the municipalities of Clifton, Totowa, Wayne, Woodland Park in Passaic County; and Cedar Grove, Fairfield and Montclair, North Caldwell in Essex County. It is located about 15 miles (24 km) west of New York City. 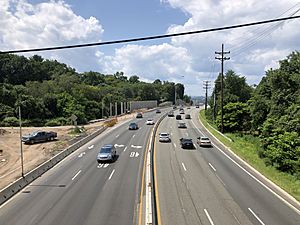 US 46 westbound in Little Falls

Little Falls is crisscrossed by several major roadways, including U.S. Route 46 and New Jersey Route 23. The Garden State Parkway and Interstate 80 run near the municipality. There are numerous crossings of the Upper Passaic River in town.

The Little Falls station and Montclair State University station of NJ Transit both serve Little Falls, offering service on the Montclair-Boonton Line to Hoboken Terminal in Hoboken, or from Montclair State University Station on Midtown Direct trains to New York City's Pennsylvania Station in Midtown Manhattan via the Secaucus Junction. The township was formerly served by the Great Notch station until NJ Transit closed it in January 2010 because of low ridership.

NJ Transit bus transportation is offered to the Port Authority Bus Terminal in Midtown Manhattan on the 191, 194 and 195 routes. Newark, New Jersey, is served by routes 11 and 28 (on Saturdays and Sundays). Local routes are the 704 and 705 lines. In September 2012, as part of budget cuts, NJ Transit suspended service to Newark on the 75 line.

The New Jersey Jackals of the Frontier League play at Yogi Berra Stadium, located in Little Falls on the campus of Montclair State University.

For ninth through twelfth grades, students in public school attend Passaic Valley Regional High School, which also serves students from Totowa and Woodland Park. The school facility is located in Little Falls. As of the 2018–19 school year, the high school had an enrollment of 1,186 students and 102.0 classroom teachers (on an FTE basis), for a student–teacher ratio of 11.6:1. Seats on the high school district's nine-member board of education are allocated based on the population of the constituent municipalities, with three seats each assigned Little Falls, Totowa and Woodland Park.

Most of Montclair State University is located in Little Falls. During 2011, the university employed 66 residents on a full or part-time basis, who earned almost $3.5 million in total compensation.

People who were born in, residents of, or otherwise closely associated with Little Falls include:

All content from Kiddle encyclopedia articles (including the article images and facts) can be freely used under Attribution-ShareAlike license, unless stated otherwise. Cite this article:
Little Falls, New Jersey Facts for Kids. Kiddle Encyclopedia.