In 1694 Arent Schuyler, a young surveyor, miner and land speculator, was sent into northwestern New Jersey to investigate rumors that the French were trying to incite the local Lenni-Lenape Native Americans to rebel against the English. Schuyler found no evidence of a rebellion, but discovered a rich fertile valley where the Lenni-Lenape grew a variety of crops. Schuyler reported his findings to the English and then convinced Major Anthony Brockholst, Samuel Bayard, Samuel Berry, Hendrick and David Mandeville, George Ryerson and John Mead to invest in the purchase of the land he referred to as the Pompton Valley. The seven chose Schuyler to be the negotiator with the Lenape for the rights to the area. Bayard purchased 5,000 acres (20 km2) from the East Jersey Company on November 11, 1695, in what was then known as New Barbadoes Township in Bergen County.

In 1710 the area became part of Saddle River Township in Bergen County. By 1837 the residents of Wayne found themselves in Manchester Township in newly formed Passaic County. Finally, on April 12, 1847, the first Wayne Township organization meeting was held at the Henry Casey House on the Paterson-Hamburg Turnpike. The citizens voted to name the town after American Revolutionary War General Anthony Wayne. The first mayor, called the Chairman of the Township Committee until 1962, was William S. Hogencamp.

Throughout the 18th and 19th centuries Wayne remained a farming community. The Morris Canal ran through the southwestern part of Wayne, carrying produce to market and coal from Pennsylvania. The canal was replaced by the railroad at the end of the 19th century. In the early 20th century Wayne grew as a vacation retreat for wealthy New Yorkers. In the summer visitors came from Manhattan and Brooklyn to live in the summer bungalows and enjoy the rivers.

After World War II many summer bungalows were converted to year-round residences to accommodate factory workers, and farmland was converted to residential living. As Wayne grew it adopted its current form of government in 1962. Modern highways, including New Jersey Route 23, U.S. Route 46 and Interstate 80, made Wayne easily accessible, and several national firms have located here. 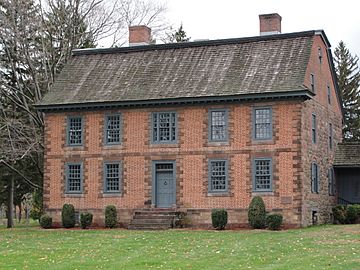 Dey Mansion, which served as headquarters for General Washington 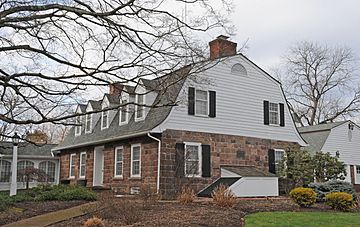 Van Saun House, which served as headquarters for General LaFayette

Dey Mansion, located on Totowa Road, is a historic Georgian style mansion that was constructed between the 1740s and 1750s.

Wayne has a number of lakes, with distinct communities and neighborhoods located around them. These include Packanack Lake, Pines Lake, Lions Head Lake, Tom's Lake and Pompton Lake (half of which is in Wayne). The Passaic River also flows through a portion of Wayne and often floods near Willowbrook Mall and riverside neighborhoods.

While Wayne has been and remains predominantly White, it has increased in diversity over the years. From 2000 to 2010, the percentage of every minority group has gone up. Some of the prevalent ethnic minority groups include Indian Americans at 3.0% and Korean Americans at 2.0%, while Puerto Ricans were 2.3% of the population.

There were 18,755 households out of which 34.4% had related children under the age of 18 living with them, 66.4% were married couples living together, 7.6% had a female householder with no husband present, and 23.4% were non-families. 20.2% of all households were made up of individuals and 10.1% had someone living alone who was 65 years of age or older. The average household size was 2.74 and the average family size was 3.19.

The indie rock band Fountains of Wayne took their name from a lawn ornament store of the same name that was located in the township on the westbound side of U.S. Route 46, though no members of the band are from the town. The store is now out of business. The same store was featured in an episode of HBO's The Sopranos.

In a Hans and Franz sketch from Saturday Night Live, the pair says they are opening up a gym in Wayne. The fact that Wayne's ZIP code, 07470, is a palindrome, was noted on an episode of the television series Full House in the seventh-season episode "Smash Club: The Next Generation".

Wayne is served by NJ Transit at the Mountain View station and Wayne Route 23 station, offering service to Hoboken Terminal, with connections to Midtown Direct trains to Penn Station in Midtown Manhattan on the Montclair-Boonton Line. Wayne-Route 23 station opened in January 2008 and offers train service via the Montclair-Boonton Line. There is regular bus service into the Port Authority Bus Terminal in Midtown Manhattan on the 194 Newfoundland-New York route and the 198 William Paterson University-New York route on weekends, with local service on the 748 Paterson-Willowbrook route (except Sunday).

All content from Kiddle encyclopedia articles (including the article images and facts) can be freely used under Attribution-ShareAlike license, unless stated otherwise. Cite this article:
Wayne, New Jersey Facts for Kids. Kiddle Encyclopedia.