Pompton Lakes was established on February 26, 1895 from portions of Pompton Township, based on the results of a referendum held three days earlier. The borough was named for the Pompton people, a sub-tribe of Native Americans who lived in the area. It was the first borough to be formed in Passaic County as part of the "boroughitis" that had struck the state at the time. Pompton Lakes did not acquire territory from more than one township, which would have entitled the borough to a seat on the County's Board of Chosen Freeholders.

An outer-ring suburb of New York City, Pompton Lakes is located approximately 20 miles (32 km) northwest of Midtown Manhattan. From the higher mountains in and around the borough one can see the New York skyline. Three rivers, the Ramapo, Pequannock and Wanaque, run through the borough, which historically provided much of the energy for various industries in the borough. In the mid-20th century, Pompton Lakes served as a local shopping destination, but lost its status as shopping malls opened in the area in the 1970s and 1980s.

The borough borders the municipalities of Bloomingdale, Wanaque and Wayne in Passaic County; Oakland in Bergen County; and Riverdale in Morris County.

There were 4,190 households out of which 31.6% had children under the age of 18 living with them, 56.0% were married couples living together, 10.4% had a female householder with no husband present, and 30.0% were non-families. 24.7% of all households were made up of individuals, and 9.8% had someone living alone who was 65 years of age or older. The average household size was 2.64 and the average family size was 3.20.

The Joe Louis Memorial Park features a monument dedicated to the boxer who lived and trained in the borough for a time.

The community of Pompton Lakes is largely based around organized events, including high school sports, senior citizen gatherings, and various group activities organized by the Pompton Lakes Recreation Committee. There is a public library, with regularly scheduled reading groups and other programs. The Committee runs summer sports at St. Mary's and other classes at the Civic Center and Elks Lodge. They also run the Teen Center, which has many dances and events. The Elks Lodge hosts numerous events and Bingo Nights.

Pompton Day, the town's major end-of-summer event, takes place every Labor Day weekend along the lake, with many vendors participating among popular events and a firework show ending the day. Other popular town events are the Holiday Stroll, The Memorial Day Parade, and Trick-or-Treating downtown. 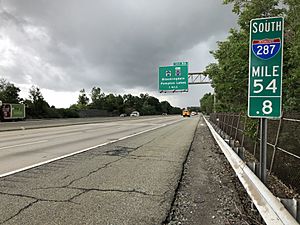 I-287 southbound in Pompton Lakes 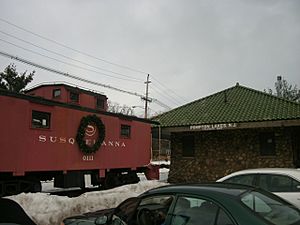 Pompton Lakes train station, which was served by the New York, Susquehanna and Western Railway.

Major roads through Pompton Lakes include Interstate 287 and Paterson-Hamburg Turnpike.

NJ Transit's 193, 194, and 197 routes stop at various points in the borough, with service to and from Port Authority Bus Terminal in Midtown Manhattan. Local service through Passaic and Bergen counties is offered on the 748 line.

In September 2012, as part of series of budget cuts, NJ Transit suspended service to Newark on the 75 line. 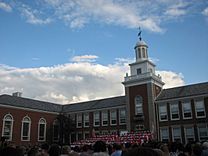 St. Mary's School was a Catholic school for pre-kindergarten through eighth grade students that operated under the supervision of the Roman Catholic Diocese of Paterson. Opened in 1951, the school was closed at the end of the 2019-20 school year in the wake of a ballooning fiscal deficit.

People who were born in, residents of, or otherwise closely associated with Pompton Lakes include:

All content from Kiddle encyclopedia articles (including the article images and facts) can be freely used under Attribution-ShareAlike license, unless stated otherwise. Cite this article:
Pompton Lakes, New Jersey Facts for Kids. Kiddle Encyclopedia.