Albert Payson Terhune (December 21, 1872 – February 18, 1942) was an American author, dog breeder, and journalist. He was popular for his novels relating the adventures of his beloved collies and as a breeder of collies at his Sunnybank Kennels, the lines of which still exist in today's Rough Collies.

Albert Payson Terhune was born in New Jersey to Mary Virginia Hawes and the Reverend Edward Payson Terhune. His mother, Mary Virginia Hawes, was a writer of household management books and pre-Civil War novels under the name Marion Harland. Terhune had four sisters and one brother, though only two of his sisters lived to be adults: Christine Terhune Herrick (1859–1944); and Virginia Terhune Van De Water (1865–1945). 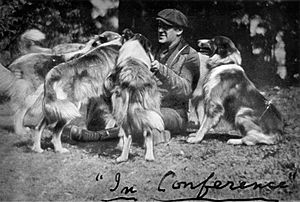 Albert Payson Terhune in conference with his Rough Collies

His Sunnybank Kennels where he bred and raised rough collies were "the most famed collie kennels in the U.S."

"Bert" Terhune was an active member of the Adventurers' Club of New York.

Terhune was married twice. His first wife, Lorraine Bryson Terhune, died at the age of 23, four days after giving birth to Lorraine Virginia Terhune Stevens (1898–1956) and nine months into the marriage. He later remarried to Anice Terhune; they never had children. He died on February 18, 1942. He was buried at the Pompton Reformed Church in Pompton Lakes, New Jersey.

His estate, Sunnybank, in Wayne, New Jersey, is maintained as Terhune Memorial Park – Sunnybank. It is open to the public and visitors can visit the graves of many of the dogs mentioned in Terhune's works and view a collection of Terhune's book and dog awards at the Van Riper-Hopper Historic House Museum. Historical and family items from the Terhune home, "The Place," can be found at the Pompton Lakes Historical Museum and the Van Riper-Hopper House Museum in Wayne, New Jersey. Albert Payson Terhune Elementary School, one of nine elementary schools in Wayne, New Jersey, is named in honor of the author. Their mascot is the collie dog. Pequannock Township, adjacent to Wayne, has a Payson Road, Terhune Ave and a Ladd Street named after him and his Canine character.

As a tribute to Terhune, the dog in Harlan Ellison's A Boy and His Dog, as well as the later 1975 film, calls his master Albert.

Albert Payson Terhune first published short stories about his collie Lad, titled Lad Stories, in various general-interest magazines, including Red Book, Saturday Evening Post, Ladies' Home Journal, Hartford Courant, and the Atlantic Monthly. The first of his novels about his dogs, Lad: A Dog, collected a dozen stories of his collie Lad in novel form. Lad was followed by over 30 additional dog-focused novels, including two additional books about Lad. Published in 1919, the novel was a best seller in both the adult and young adult markets and has been reprinted over 80 times. It was adapted into a feature film in 1962. Terhune is now often criticized for his starkly racist depictions of the minorities, hill people and so-called "half-breeds" that peopled parts of northern New Jersey less idealized than Sunnybank. 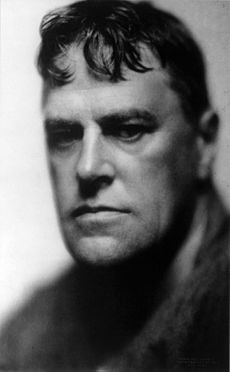 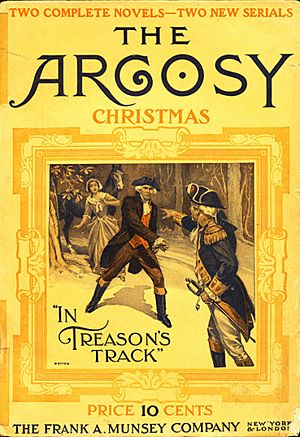 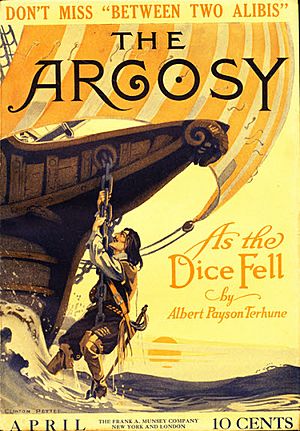 All content from Kiddle encyclopedia articles (including the article images and facts) can be freely used under Attribution-ShareAlike license, unless stated otherwise. Cite this article:
Albert Payson Terhune Facts for Kids. Kiddle Encyclopedia.