The Rough Collie (also known as the Long-Haired Collie) is a long-coated dog breed of medium to large size that, in its original form, was a type of collie used and bred for herding sheep in Scotland. Originating in the 1800s, the breed is now well known through the works of author Albert Payson Terhune, beginning with books about Lad, and through Lassie novels, movies, and television shows. Rough Collies generally come in shades of sable and white (sometimes mahogany), blue merle, tri-colored, and white. The breed has a distinctive long tapered snout and tipped ears.

There is a smooth-coated variety known as a Smooth Collie; some breed organisations, including both the American and Canadian Kennel Clubs, consider the smooth-coat and rough-coat breeds to be variations of the same breed. Rough Collies closely resemble the smaller Shetland Sheepdog or "Sheltie", but the two breeds do not have an exclusive linear relationship. 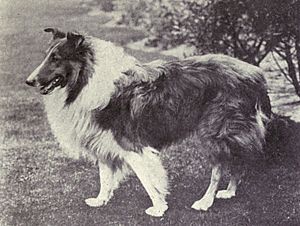 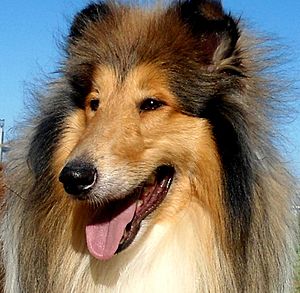 Both Rough and Smooth collies are descended from a localised variety of herding dog originating in Scotland and Wales. The Scottish variety was a large, strong, aggressive dog, bred to herd highland sheep. The Welsh variety was small and nimble, domesticated and friendly, and also herded goats. When the English saw these dogs at the Birmingham market, they interbred them with their own variety of sheepdogs, producing a mixture of short- and long-haired varieties. After the industrial revolution, dog ownership became fashionable, and these early collies were believed to have been crossed with the Borzoi (Russian Wolfhound) to get a more "noble" head (longer muzzle), which is today one of the true characteristics of the Rough Collie. It is not known conclusively if the Borzoi cross made it into the mainstream of the breed.

When Queen Victoria acquired a Rough Collie, after seeing one at Balmoral Castle, they were transformed into something of a fashion item. Continued breeding for show purposes drastically changed the appearance of the dogs; in the 1960s, it was a much taller dog than it is today (in the UK; in the US, the size standard has not been revised downward and dogs have remained between 24-26"). Earlier dogs were also more sturdy in build and reportedly capable of covering up to 100 miles in one day. In the UK the Rough Collie is no longer used for serious herding, having been replaced by the Border Collie, though in the United States and a number of European countries, there has been a resurgence in the use of the Collie as a working and performance dog.

The Collie Club of America is one of the oldest breed-specific clubs in existence in the United States (founded in 1886). The Collie Club in England dates from 1881.

In the 18th century, the Rough Collie's natural home was in the highlands of Scotland, where he had been used for centuries as a sheepdog. The dogs were bred with great care in order to assist their masters in the herding and guarding of their flock.

By the turn of the century, the American Rough Collie was in a state of continued development. The breed continued to thrive in England. American show prizes were dominated by the British imports. As a result of the imports, the breed made rapid progress between 1900 to 1920. These dogs built the foundations upon which the present day Rough Collie is based and paved the way for the emergence of the great American kennels of the 1920s and 1930s 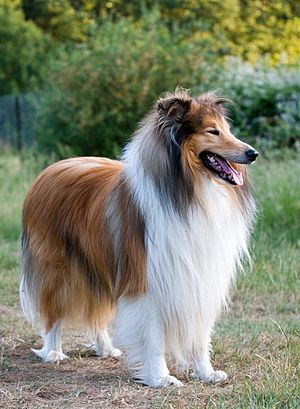 All have white coat areas, in the collar, parts of the leg, and usually the tail tip. Some may have white blazes on their faces. Note that the American Kennel Club accepts white, where the dog is predominantly white with coloured markings of sable, tricolor, or blue merle on the head and sometimes body patches. The downy undercoat is covered by a long, dense, coarse outer coat with a notable ruff around the neck, feathers about the legs, a petticoat on the abdomen, and a frill on the hindquarters. 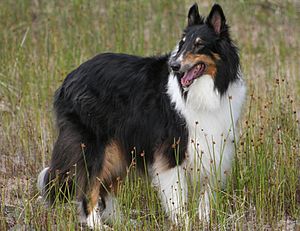 One of the characteristic features of the Rough Collie is its head. This is light in relation to the rest of the body, and resembles a blunted wedge tapering smoothly from ears to black nose, with a distinct stop and parallel head planes. The muzzle is well rounded, and never square. There is considerable variation in the color of the head, however. The eyes are medium-sized and almond shaped. The ears are supposed to be semi-prick, or tipped, with the upper third folded over. Ears which do not "tip" properly, however, are common, and many collies have their ears taped as puppies (using medical adhesive or paper tape) to encourage them to lay properly – no cutting or surgery is involved.

Rough Collies have a more blunt, gradually tapering, face than the smaller, but otherwise very similar Shetland Sheepdog, which is partly descended from the Rough Collie. The planes of the muzzle and the top of the skull should be parallel in collies, with a slight but distinct stop. (In shelties, the planes are not parallel.) The ears of a Rough Collie are similar to a Shetland Sheepdog's, but larger. Furthermore, once seen, the contrast between the Rough Collie head and that of a Border Collie is immediately apparent, the latter having a considerably shorter muzzle and a more distinct stop between muzzle and forehead. The ruff is also distinctive in distinguishing the two breeds.

The size and weight varies among breed standards; male collies can stand 55.8 to 66 cm (22 to 26 in) at the shoulder; the female averages 5 cm (2 in) shorter. The males are usually in the weight range (50–70 lbs), and the females are usually 5 to 10 lbs less. Collies in the US are sometimes reported to be over one hundred pounds, but a large collie typically weighs no more than 70 pounds. US and UK standards may differ. The UK standard calls for dogs to be significantly smaller than those under the American Kennel Club. 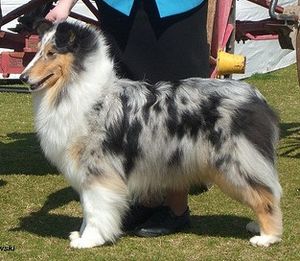 Rough collies should show no nervousness or aggression, and are generally great with children and other animals. However, they must be well socialised to prevent shyness. They are medium to large sized dogs, and they generally need a house instead of being in a small apartment. Like many herding dogs, collies can be fairly vocal, and some are easily trained not to bark. The amount of herding instinct varies, with some dogs being quite drivey and others calmer.

Rough Collies are very loyal and may be one-family dogs (although most make exceptions for children), but are very rarely aggressive or protective beyond barking and providing a visual deterrent. They are typically excellent with kids. They are eager to learn and respond best to a gentle hand.

The rough collie's long coat has made the breed successful on northern Midwest farms as an able herder and guardian of the farm during the winter. The dog needs to be gradually acclimated to the cold and a suitable insulated outdoor shelter must be provided for the dog along with ample quality food and a source of unfrozen water. The rough collie also relishes playing in the snow with children during the winter months. They guard the farm while the owner is away and are naturally protective of small children.

The double-layered coat needs to be brushed frequently and thoroughly to keep it in a show condition. Pet dogs need less maintenance but still a significant amount to keep the dog healthy. The profuse coat picks up grass seeds and burrs, and many dogs tend to mat to some degree, particularly behind the ears, around the collar (if a collar is left on the dog), and in the pants. Spaying and neutering can alter coat texture, making it softer and more prone to matting. 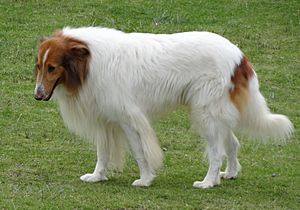 In the 18th century, the Collie's natural home was in the highlands of Scotland

In the 18th century, the Collie's natural home was in the highlands of Scotland, where it had been used for centuries as a sheepdog. The dogs were bred with great care in order to assist their masters in the herding and guarding of their flock.

Collies are capable of being keen herders while remaining sensible, flexible family companions, whether as working dogs on a ranch or farm or helping out a suburban owner who keeps a few sheep, goats, or ducks as a hobby. Participation in herding helps preserve the special heritage of the Collie and opens up new opportunities for owner and dog. The qualities that make a good herding dog – trainability, adaptability, loyalty, soundness of body and character, agility, grace – are important in many areas, and contribute so much toward making the dog an outstanding companion as well.

Throughout the country there are local herding clubs that provide clinics, work days, trials and tests. Several organizations provide herding title programs in which Collies regularly participate. A Herding Instinct Test introduces Collies and their handlers to herding at the basic level. It is designed to show whether or not a Collie, who may have never had any exposure to livestock, still has the natural instinct to perform the function for which the breed was initially created. It is a non-competitive introduction to carefully selected and easily handled livestock under favorably controlled conditions.

Rough Collies can compete in dog agility trials, obedience, conformation, flyball, tracking, and herding events. Herding instincts and trainability can be measured at noncompetitive herding tests. Rough Collies exhibiting basic herding instincts can be trained to compete in herding trials. The breed has also been known to work as search and rescue dogs, therapy dogs and guide dogs for the blind. 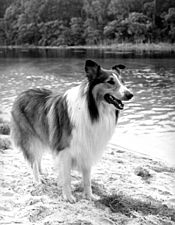 All content from Kiddle encyclopedia articles (including the article images and facts) can be freely used under Attribution-ShareAlike license, unless stated otherwise. Cite this article:
Rough Collie Facts for Kids. Kiddle Encyclopedia.