The Shetland Sheepdog, often known as the Sheltie, is a breed of herding dog that originated in the Shetland Islands of Scotland. The original name was Shetland Collie, but this caused controversy among the Rough Collie breeders of the time, so the breed's name was formally changed. This hard-working small dog is intelligent, vocal, excitable and willing to please. They are incredibly loyal to their owners to the point where they are often referred to as "shadows" due to their attachment to family. This breed was formally recognized by The Kennel Club (UK) in 1909.

Like the Shetland pony, Shetland Cattle and the Shetland sheep, the Shetland Sheepdog is a hardy but diminutive breed developed to thrive amidst the harsh and meagre conditions of its native islands. While the Sheltie still excels at herding, today it is often raised as a farm dog and/or family pet.

The Sheltie's origins are obscure, but it is not a direct descendant of the Rough Collie, which it largely resembles. Rather, the Sheltie is a descendant of small specimens of the Scottish Collie and the King Charles Spaniel. They were originally a small mixed-breed dog, often only about 8 to 12 inches in height at the shoulder, and it is thought that the original Shetland herding dogs were of the Spitz type, and were crossed with Collies from mainland Britain. In the early 20th century, James Loggie added a small Rough Collie to the breeding stock, and helped establish the breed that would become the modern Shetland Sheepdog. 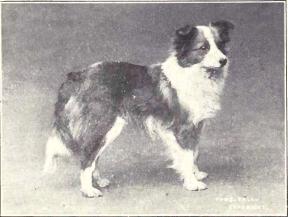 Photograph of a Shetland Sheepdog from 1915

Unlike many miniature breeds that resemble their larger counterparts, this breed was not developed simply by selectively breeding the Rough Collie for smaller and smaller size. The original sheepdog of Shetland was a Spitz-type dog, probably similar to the modern Icelandic Sheepdog. This dog was crossed with mainland working collies brought to the islands, and then after being brought to England, it was further extensively crossed with the Rough Collie, and other breeds including some or all of the extinct Greenland Yakki, the King Charles Spaniel (not the Cavalier), the Pomeranian, and possibly the Border Collie. The original Spitz-type working sheepdog of Shetland is now extinct, having been replaced for herding there by the Border Collie. Shelties were used for herding until commercial livestock farming required larger breeds.

When the breed was originally introduced breeders called them Shetland Collies, which upset Rough Collie breeders, so the name was changed to Shetland Sheepdog. During the early 20th century (up until the 1940s), additional crosses were made to Rough Collies to help retain the desired Rough Collie type – in fact, the first AKC Sheltie champion's dam was a purebred rough Collie.

The year 1909 marked the initial recognition of the Sheltie by the English Kennel Club, with the first registered Sheltie being a female called Badenock Rose. The first Sheltie to be registered by the American Kennel Club was "Lord Scott" in 1911. 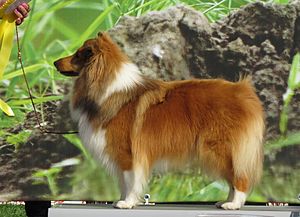 The general appearance of the Sheltie is that of a miniature Rough Collie. They are a small, double coated, working dog, agile and sturdy. Blue merle Shelties may have blue eyes or one brown and one blue eye, but all others have dark-colored eyes. Their expression should be that of alertness with a gentle and sometimes reserved nature. They are often very good with children. They carry their tail down low, only lifted when alert and never carried over the back. They are an intensely loyal breed, sometimes reserved with strangers but should not be shy or showing timidness as per the AKC breed standard. 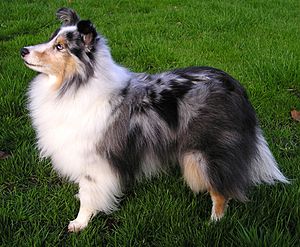 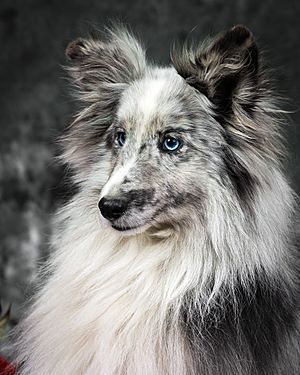 A bi-blue Shetland Sheepdog with blue eyes, caused by the merle factor.

Shelties have a double coat, which means that they have two layers of fur that make up their coat. The long, rough guard hairs lie on top of a thick, soft undercoat. The guard hairs are water-repellent, while the undercoat provides relief from both high and low temperatures.

The English Kennel Club describes three different colors: "tricolor, blue merle, and sable (ranging from golden through mahogany), marked with varying amounts of white and/or tan." Essentially, however, a blue merle dog is a genetically black dog, either black, white, and tan (tricolor). In the show ring, blue merles may have blue eyes; all other colors must have brown eyes.

White factoring affects the amount of white on the dog. It is hard to tell, without actually breeding, whether a dog is white-factored or not, though dogs with white going up the stifle (the front of the hind leg) are usually assumed to be white-factored. Breeding two white-factored dogs can result in color-headed whites — Shelties with colored heads (sable, tricolor, bi-black, or blue or sable merle) and white bodies. For show dogs, dogs more than 50 percent white are heavily penalized and thus are not shown in the breed ring; they are normal in every other way.

Double merles, a product of breeding two merle Shelties together, have a very high incidence of deafness or blindness.

There have been reports of a brindle Sheltie but many Sheltie enthusiasts agree that a cross sometime in the ancestry of that specific Sheltie could have produced a brindle. Unacceptable colors in the show ring are a rustiness in a blue or black coat. Colors may not be faded, no conspicuous white spots, and the color cannot be over 50 percent white. 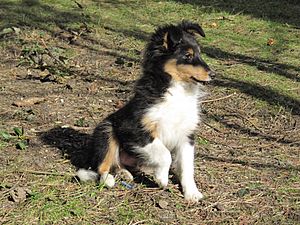 Shelties normally weigh around 5–11 kilograms (11–24 lb). In general, males are taller and heavier than females. Accepted height ranges may differ depending on country and standard used. In the USA and Canada, breed standards state that males and females can be between 33–41 centimetres (13–16 in), all other standards (Australia, New Zealand and UK) specify males: 37 cm ± 2½ cm, females: 35.5 cm ± 2½ cm except FCI which specifies females: 36 cm ± 2½ cm at the shoulder (withers), however, some shelties can be found outside of these ranges but are not considered truly representative of the breed. Variation can be found within litters, and height (in the 40–50 cm range) is above the breed standard in some lines. 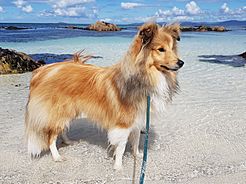 A 12 mth old Sheltie on the Isle of Mull (Scotland)

To conform to the breed standards, the Shelties' ears should bend slightly or "tip", this contributes to the "proper Sheltie expression". The ear is to have the top third to a quarter of the ear tipped. If a dog's ears are not bent (referred to as prick ears) some owners brace them into the correct position for several weeks to several months. Wide-set (too much distance between) ears are also not a desired trait, nor are ears which tip too low down (referred to as 'hound' ears).

Shelties have a double coat, and often shed a lot of the time, no matter the season. The topcoat consists of long, straight, water-repellent hair, which provides protection from cold and the elements. The undercoat is short, furry and very dense and helps to keep the dog warm. Mats can be commonly found behind the ears, under the elbow on each front leg, and in the fluffy fur on the hind legs (the "skirts"), as well as around the collar (if worn). The coat is usually shed twice a year, often in spring and autumn. Females will also shed right before or right after giving birth. Male shelties technically shed less than females but fur still comes off constantly. 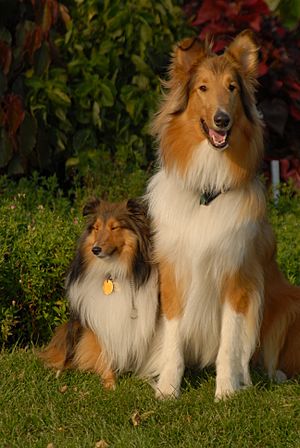 Apart from their size difference, Shelties and Rough Collies look very much alike.

Shelties have a high level of intelligence. According to Dr Stanley Coren, an expert on animal intelligence, the Shetland sheepdog is one of the brightest dogs, ranking 6th out of 138 breeds tested. His research found that an average Sheltie could understand a new command in fewer than five repetitions and would obey a command the first time it was given 95% of the time or better.

All content from Kiddle encyclopedia articles (including the article images and facts) can be freely used under Attribution-ShareAlike license, unless stated otherwise. Cite this article:
Shetland Sheepdog Facts for Kids. Kiddle Encyclopedia.