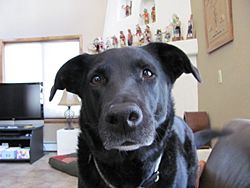 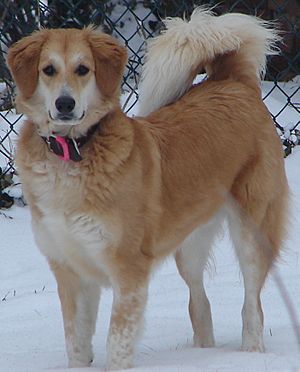 Heavy winter coat with countershading in a mixed-breed 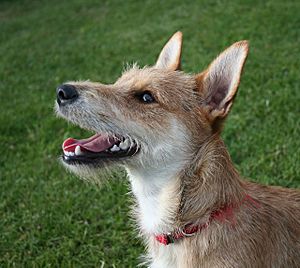 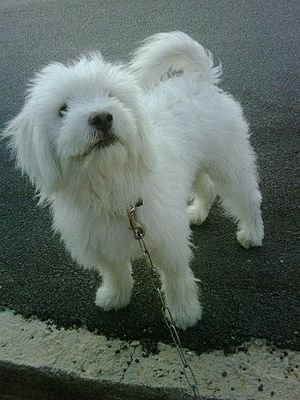 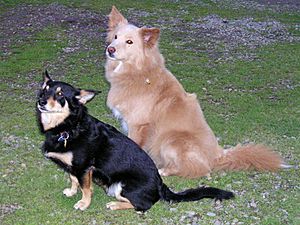 These littermates share an Australian Shepherd mother, although neither exactly resembles that breed.

A mongrel, mixed-breed dog or mutt is a dog that does not belong to one officially recognized breed and is not the result of intentional breeding. Estimates place their numbers at 150 million animals worldwide. Although the term "mixed-breed dog" is preferred by some, many mongrels have no known purebred ancestors. Furthermore, crossbreed dogs, while literally a mix of breeds, differ from mongrels in being intentionally bred. Although mongrels have at times been considered somehow lesser than intentionally bred dogs, they are thought to be less susceptible to genetic health problems associated with dog breeding (based on the theory of heterosis), and have enthusiasts and defenders who prefer them to intentionally bred dogs.

Although mongrels exhibit great variation, generations of uncontrolled breeding and environmental pressures may tend to shape them toward certain general average body types and characteristics known as landraces, some of which may be developed by people into new breeds such as the Alaskan husky.

At other times, the word "mongrel" has been applied to informally purpose-bred dogs such as curs which were created at least in part from mongrels, especially if the breed is not officially recognized.

Like mongrels/mixed breeds, crossbred dogs belong to no one recognized breed. Unlike mixed-breeds, however, crossbred dogs are often the product of artificial selection – intentionally created by humans, whereas the term "mongrel" specifically refers to dogs that develop by natural selection, without planned intervention of humans.

In the United States, the term "mixed-breed" is a favored synonym over "mongrel" among many who wish to avoid negative connotations associated with the latter term. The implication that such dogs must be a mix of defined breeds may stem from an inverted understanding of the origins of dog breeds. Pure breeds have been, for the most part, artificially created from random-bred populations by human selective breeding with the purpose of enhancing desired physical, behavioral, or temperamental characteristics. Dogs that are not purebred are not necessarily a mix of such defined breeds. Therefore, among some experts and fans of such dogs, "Mongrel" is still the preferred term. 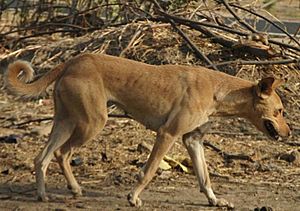 The words cur, tyke, mutt, and mongrel are used, sometimes in a derogatory manner. There are also regional terms for mixed-breed dogs. In the United Kingdom, mongrel is the unique technical word for a mixed-breed dog. North Americans generally prefer the term mix or mixed-breed. Mutt is also commonly used (in the United States and Canada). Some American registries and dog clubs that accept mixed-breed dogs use the breed description All American.

There are also names for mixed-breeds based on geography, behavior, or food. In Hawaii, mixes are referred to as poi dogs, although they are not related to the extinct Hawaiian poi dog. In The Bahamas and Turks and Caicos Islands, the common term is potcake dogs (referring to the table scraps they are fed). In South Africa the tongue-in-cheek expression pavement special is sometimes used as a description for a mixed-breed dog. In Serbia similar expression is prekoplotski avlijaner (over-the-fence yard-dweller). In the Philippines, mixed-breed street dogs are often called askal, a Tagalog-derived contraction of asong kalye (”street dog"). In Puerto Rico they are known as satos; in Venezuela they are called cacris, a contraction of the words callejero criollo (literally, street creole, as street dogs are usually mongrels); and in Chile and Bolivia, they are called quiltros. In Costa Rica it is common to hear the word zaguate, a term originating from a Nahuatl term, zahuatl, that refers to the scabies disease. In the rural southern United States, a small hunting dog is known as a feist.

Slang terms are also common. Heinz 57, Heinz, or Heinz Hound is often used for dogs of uncertain ancestry, in a playful reference to the "57 Varieties" slogan of the H. J. Heinz Company. In some countries, such as Australia, bitsa (or bitzer) is sometimes used, meaning "bits o' this, bits o' that". In Brazil and the Dominican Republic, the name for mixed-breed dogs is vira-lata (trash-can tipper) because of homeless dogs who knock over trash cans to reach discarded food. In Newfoundland, a smaller mixed-breed dog is known as a cracky, hence the colloquial expression "saucy as a cracky" for someone with a sharp tongue. 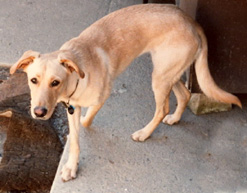 Guessing a mixed-breed's ancestry can be difficult even for knowledgeable dog observers, because mixed-breeds have much more genetic variation than purebreds. For example, two black mixed-breed dogs might each have recessive genes that produce a blond coat and, therefore, produce offspring looking unlike their parents.

Starting in 2007, genetic analysis has become available to the public. The companies claim their DNA-based diagnostic test can genetically determine the breed composition of mixed-breed dogs. These tests are still limited in scope because only a small number of the hundreds of dog breeds have been validated against the tests, and because the same breed in different geographical areas may have different genetic profiles. The tests do not test for breed purity, but for genetic sequences that are common to certain breeds. With a mixed-breed dog, the test is not proof of purebred ancestry, but rather an indication that those dogs share common ancestry with certain purebreds. The American Kennel Club does not recognize the use of DNA tests to determine breed.

As well, many newer dog breeds can be traced back to a common foundational breed making them difficult to separate genetically. For example, Labrador Retrievers, Flat-coated Retrievers, Chesapeake Bay Retrievers, and Newfoundland Dogs share the ancestry of the St. John's water dog – a now extinct naturally occurring dog breed from the island of Newfoundland.

The theory of hybrid vigor suggests that as a group, dogs of varied ancestry will be generally healthier than their purebred counterparts. In purebred dogs, intentionally breeding dogs of very similar appearance over several generations produces animals that carry many of the same alleles, some of which are detrimental. If the founding population for the breed was small, then the genetic diversity of that particular breed may be small for quite some time. In essence, when humans select certain dogs for new breeds, they artificially isolate that group of genes and cause more copies of that gene to be made than might have otherwise occurred in nature. Initially, the population will be more fragile because of the lack of genetic diversity. If the dog breed is popular, and the line continues, over hundreds of years diversity will increase due to mutations and occasional out-breeding; like an island with a few new birds—they will diversify. This is why some of the very "old" breeds are more stable. The problem is when certain traits found in the breed standard are associated with genetic disorders. Then, the artificial selective force favors the duplication of the genetic disorder, because it comes with a desired physical trait. The genetic health of hybrids tends to be higher. Healthy traits have been lost in many purebred dogs lines because many breeders of showdogs are more interested in conformation – the physical attributes of the dogs in relation to the breed standard – than in the health and working temperament for which the dog was originally bred.

Populations are particularly vulnerable when the dogs bred are closely related. Inbreeding among purebreds has exposed various genetic health problems not always readily apparent in less uniform populations. Mixed-breed dogs are more genetically diverse due to the more haphazard nature of their parents' mating. However, "haphazard" is not the same as "random" to a geneticist. The offspring of such matings might be less likely to express certain genetic disorders because there might be a decreased chance that both parents carry the same detrimental recessive alleles, but some deleterious recessives occur across many seemingly unrelated breeds, and therefore merely mixing breeds is no guarantee of genetic health. Also, when two poor specimens are bred, the offspring could inherit the worst traits of both parents. This is commonly seen in dogs from puppy mills.

Several studies have shown that mixed-breed dogs have a health advantage over pure-bred dogs. A German study finds that "Mongrels require less veterinary treatment". Studies in Sweden have found that "Mongrel dogs are less prone to many diseases than the average purebred dog" and, referring to death rates, “Mongrels were consistently in the low risk category”. Data from Denmark also suggest that mixed breeds have higher longevity on average compared to purebreeds. 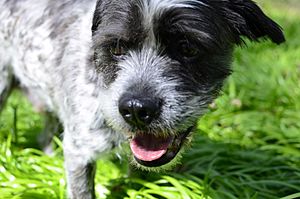 Dog with coat traits of Wired Haired Pointed Griffin, although body type and size are quite different.

In 2013, a study found that mixed breeds live on average 1.2 years longer than pure breeds, and that increasing body-weight was negatively correlated with longevity (i.e. the heavier the dog the less its lifespan). 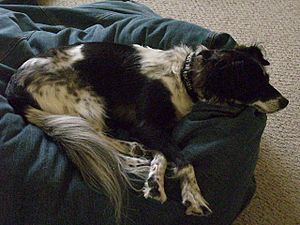 A three-year-old mixed-breed with collie-papillon characteristics.

Mongrel dogs can be divided roughly into types:

Purebred dogs are known by breed names given to groups of dogs that are visibly similar in most characteristics and have reliable documented descent. But in recent years many owners and breeders of crossbreed dogs identify them—often facetiously—by invented names constructed from parts of the parents' breed names. These are known as portmanteau names and the resulting crosses as "designer dogs." For example, a cross between a Pekingese and a Poodle may be referred to as a Peekapoo. Another trendy cross is the Goldendoodle, a cross between a standard poodle and a golden retriever. 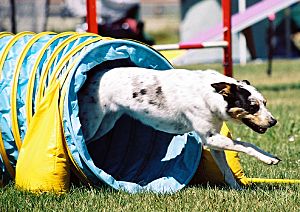 Until the early 1980s, mixed-breed dogs were usually excluded from obedience and other dog sport competitions. However, starting with the American Mixed Breed Obedience Registry (AMBOR) and the Mixed Breed Dog Clubs of America (MBDCA), which created obedience venues in which mixed-breed dogs could compete, more opportunities have opened up for all dogs in all dog sports. Most dog agility and flyball organizations have always allowed mixed-breed dogs to compete. Today, mixed-breeds have proved their worth in many performance sports. 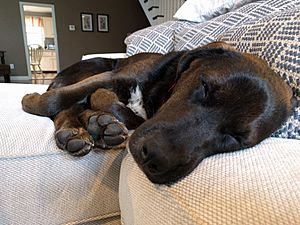 In conformation shows, where dogs' conformation to a breed standard is evaluated, mixed-breed dogs normally cannot compete. For purebred dogs, their physical characteristics are judged against a single breed standard. Mixed-breed dogs, however, are difficult to classify except according to height; there is tremendous variation in physical traits such as coat, skeletal structure, gait, ear set, eye shape and color, and so on. When conformation standards are applied to mixed-breed dogs, such as in events run by the MBDCA, the standards are usually general traits of health, soundness, symmetry, and personality. The Kennel Club (UK) operates a show called Scruffts (a name derived from its prestigious Crufts show) open only to mixed-breeds in which dogs are judged on character, health, and temperament. Some kennel clubs, whose purpose is to promote purebred dogs, still exclude mixed-breeds from their performance events. The AKC and the FCI are two such prominent organizations. While the AKC does allow mixed-breed dogs to earn their Canine Good Citizen award, mixed-breed dogs are not permitted to enter AKC "all breed" events, though through their "Canine Partners" program, mixed breed dogs can be registered to compete in AKC Agility, Obedience, and Rally events.

Studies that have been done in the area of health show that mixed-breeds on average are both healthier and longer-lived than their purebred relations. This is because current accepted breeding practices within the pedigreed community results in a reduction in genetic diversity, and can result in physical characteristics that lead to health issues.

All content from Kiddle encyclopedia articles (including the article images and facts) can be freely used under Attribution-ShareAlike license, unless stated otherwise. Cite this article:
Mixed-breed dog Facts for Kids. Kiddle Encyclopedia.