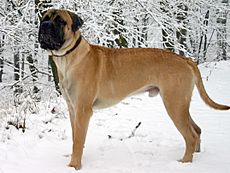 The Bullmastiff is a breed of dog. It started in 19th-century England. It is a mixture of a bulldog and a mastiff. It has a short tan, reddish-brown coat with black on the face and ears. 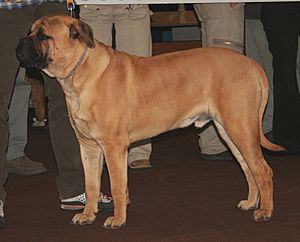 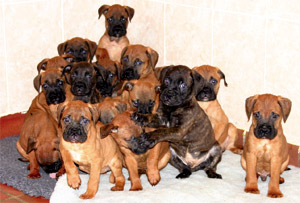 A litter of Bullmastiff puppies 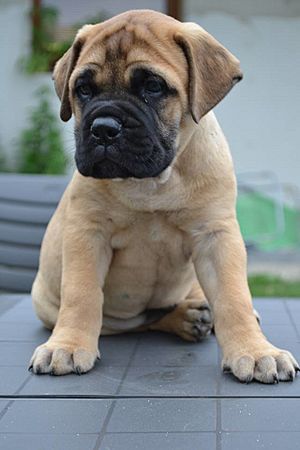 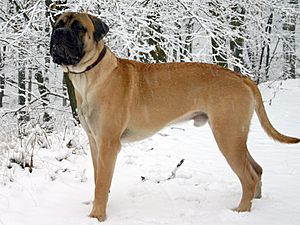 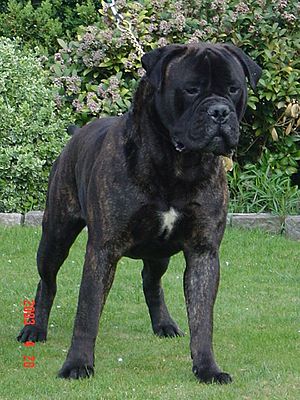 A Bullmastiff's coat may appear in fawn, red, or brindle. These are the only acceptable colors in the AKC standard. The fawn can range from a very light brown to a reddish brown. Red can range from a light red-fawn to a dark, rich red. Brindles are a striped overlay of the fawn or red. A Bullmastiff should have no white markings, except for on the chest where a little white is allowed.

Bullmastiffs are a large working breed originating in Britain in the mid 1800s as estate guardians to ward off poachers. They were bred by gamekeepers for strength, size and speed using a cross of the tough, heavy and aggressive Bulldog of the 19th century with the large, strong, less aggressive Mastiff. As a result, the Bullmastiff is known as the Gamekeeper's Night Dog. The preferred color, by gamekeepers, was brindle, as this color works as a more effective camouflage, especially at night.

The Bullmastiff breed was deemed pure by the English Kennel Club in 1924, with a genetic background of approximately 60% Mastiff and 40% Bulldog. In 1934, the AKC recognized the Bullmastiff. The first standard for the breed was approved in 1935. The standard has undergone several revisions since then; the most current version is available on the AKC website.

Bullmastiffs are strong, powerful, but sensitive dogs. For a Bullmastiff to become a well-behaved family member, consistency is needed. Training and socialization is of high importance, as the breed can be independent. Dogs of this breed are natural guardians of their home and owners. No special guard training is needed for a Bullmastiff to react appropriately if its family is endangered. During training, a Bullmastiff requires a special approach, because these dogs do not like to repeat the same actions again and again. Activities Bullmastiffs enjoy include obedience, agility, tracking, and carting.

A UK survey based on the lifespan of 96 Bullmastiffs found a median age of 7.5 years. A Bullmastiff does not stop growing until it is about three and a half years of age.

Health concerns within the breed include hip and elbow dysplasia, progressive retinal atrophy, bloat, and cancer, with a relatively high incidence of lymphoma and mast cell tumours. Bullmastiffs are prone to certain hereditary diseases, including:

Cosmetic genetic problems include longhairs and "Dudleys". Both are recessives and not common. The Dudley, named after a notable Bulldog breeder of the 19th century, the Earl of Dudley, is a lack of pigment in the mask. It can be liver colored or simply not present.

All content from Kiddle encyclopedia articles (including the article images and facts) can be freely used under Attribution-ShareAlike license, unless stated otherwise. Cite this article:
Bullmastiff Facts for Kids. Kiddle Encyclopedia.