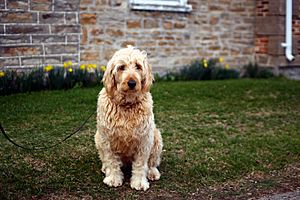 A Golden doodle sitting in a front yard.

Golden doodles are a high-maintenance breed. They will need to be professionally groomed every 8 to 12 weeks. A Golden doodle needs at least 15 to 30 minutes of exercise three times a day. When a puppy, they tend to want to play interactive games like fetch, but as they grow older, they enjoy a gentle stroll. Haircuts are necessary for Golden doodles every six weeks. This will keep the fur from tangles or matting. Make sure to take your Golden doodle out every 45-60 minutes.

Golden doodle puppies need to be fed 4 small meals a day. When your puppy grows up to 6 months old, you can feed the golden doodle larger meals twice a day.

Golden doodles are an energetic breed, so training will be much harder. To sit: Hold a treat up in the air over the Golden’s head until it sits. Reward the dog with the treat. To lay down: While the dog is sitting, hold a treat in your hand and wave your free hand up and down while beckoning the dog to lay down. Reward the Golden with the treat when it lays down.

All content from Kiddle encyclopedia articles (including the article images and facts) can be freely used under Attribution-ShareAlike license, unless stated otherwise. Cite this article:
Goldendoodle Facts for Kids. Kiddle Encyclopedia.