The Australian Shepherd, or sometimes referred to as the Aussie Shepherd, is a medium-sized breed of dog which was developed in the United States, despite it's name.

It is very similar in it's appearance to the English Shepherd and Border Collie, and indeed, studies have shown they are very similar in relation. Like many herding dogs, they show considerable drive and energy, being best at jobs such as search and rescue dogs, disaster dogs, therapy dogs, guide dogs, etc. For these reasons, they have become the 17th most popular dog breed in the United States. 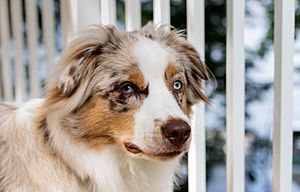 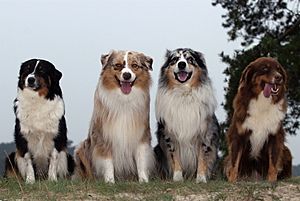 The known Aussie colors are solid black, solid red (liver), blue merle, and red/liver merle; and these colors may also have copper (tan) points or white markings in various combinations on the face, chest, and legs. A black or red dog with copper and white trim is called 'tricolor' or 'tri', while a black or red dog with white trim but no copper is called 'bicolor' or 'bi'. White, rather than skin color, on or around the ears is an indicator of increased risk for deafness. Too much white on the face and ears can place an individual dog at greater risk for sunburn and subsequent skin cancer.

The wide variety of color comes from the color allele, which is either black (B) dominant or red (b), and the dominant merle allele (M). Together, these provide four coat-color aspects that can appear in any combination:

The merle allele, which produces a mingled or patchwork combination of dark and light areas, is the coat pattern most commonly associated with the breed. This merle (M) is dominant, so heterozygous dogs (Mm) show the pigmentation pattern; however, when two merles are bred, the statistical risk is 25% of the offspring will end up with the two copies of the merle gene (homozygous). These dogs usually have a mostly white coat and blue irises and are often deaf, blind, or both. In this case, the deafness and blindness are linked to having two copies of the merle gene, which disrupts pigmentation and produces these health defects. The tri-colored (red, black, and white) Merles will have a 1/4 chance of being blind because of the genes when breeding two Merle colored dogs for the recessive fur color. 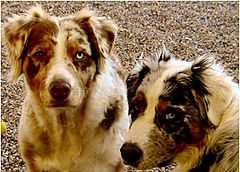 Also, variety is seen in the Aussie's eye color, and they are often heterochromatic. An early nickname for the breed was "ghost-eye dog". Aussie eyes may be any shade of brown or blue; they may have two different colored eyes, or even have bicolored or "split eyes" (for example, a half-brown, half-blue eye), which appear to be similar to the merle coloration. Merled eyes exist where one color is mixed in and swirled with another. Any combination of eye color is fine in the breed standard, so long as the eyes are healthy. In general, however, black Aussies (self, bi-color, or tri-color) tend to have brown eyes, while red (self, bi-color, or tri-color) Aussies usually have amber eyes, though these Aussies may also carry the blue-eyed gene.

The merle type in Australian Shepherds is very similar to the coat color in Mitf mouse mutants.

Although some Aussies are born with naturally bobbed or partially bobbed (stubby) tails, the majority are born with full, long tails. Breeders have historically docked the tails when the puppies are born. In the United States and Canada, the standard calls for a natural bob or docked tail not to exceed four inches as a defining characteristic. Any natural tail length is permitted when showing in Europe, where cutting off a part of their tail has been banned in most countries, including the United Kingdom.

All content from Kiddle encyclopedia articles (including the article images and facts) can be freely used under Attribution-ShareAlike license, unless stated otherwise. Cite this article:
Australian Shepherd Facts for Kids. Kiddle Encyclopedia.