The Newfoundland dog is a large working dog. They can be either black, brown, or white-and-black (called Landseer). However, in Canada, the country of their origin, the only correct colours are either black or Landseer. They were originally bred and used as a working dog for fishermen in the Dominion of Newfoundland (which is now part of Canada). They are known for their giant size, intelligence, tremendous strength, calm dispositions, and loyalty. Newfoundland dogs excel at water rescue/lifesaving because of their muscular build, thick double coat, webbed feet, and innate swimming abilities. 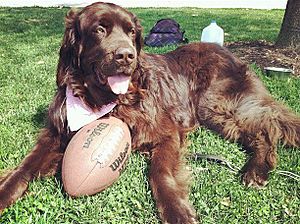 The American Kennel Club (AKC) standard colors of the Newfoundland dogs are black, brown, grey, and white-and-black (sometimes referred to as Landseer). Other colors are possible but are not considered rare or more valuable. The Kennel Club (KC) permits only black, brown, and white/black; the Canadian Kennel Club (CKC) permits only black and white/black. The "Landseer" pattern is named after the artist, Sir Edwin Henry Landseer, who featured them in many of his paintings. Fédération Cynologique Internationale (FCI) consider the ECT Landseer ("European Continental Type") to be a separate breed. It is a taller, more narrow white dog with black markings not bred with a Newfoundland. 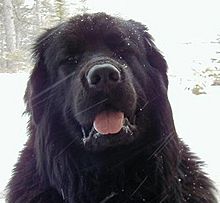 Newfoundland dogs are well known for their even temperament and stoic nature.

The Newfoundland's extremely large bones give it mass, while its large musculature gives it the power it needs to take on rough ocean waves and powerful tides. These dogs have huge lung capacity for swimming extremely long distances and a thick, oily, and waterproof double coat which protects them from the chill of icy waters. The double coat makes the dog hard to groom, and also causes a lot of shedding to occur. The droopy lips and jowls make the dog drool, especially in high heat.

In the water, the dog's massive webbed paws give it maximum propulsion. The swimming stroke is not an ordinary dog paddle. Unlike other dogs, the Newfoundland moves its limbs in a down-and-out motion giving more power to every stroke.

A Newfoundland dog lying next to its combed-out seasonal undercoat.

The Newfoundland dog is known for its calm and docile nature and its strength. They are highly loyal and make ideal working dogs. It is for this reason that this breed is known as "the gentle giant". International kennel clubs generally describe the breed as having a sweet temper. It typically has a deep bark and is easy to train if started young. They are wonderfully good with children, but small children can get accidentally leaned on and knocked down. Newfoundlands are ideal companions in the world of therapy and are often referred to as the nanny dog. The breed was memorialized in "Nana", the beloved guardian dog in J.M. Barrie's Peter Pan. The Newfoundland, in general, is good with other animals, but its size can cause problems if it is not trained.

A Newfoundland's good, sweet nature is so important, it is listed in the Breed Standards of many countries; dogs exhibiting poor temperament or aggression are disqualified from showing and should never be used to breed. The breed standard in the United States reads that "Sweetness of temperament is the hallmark of the Newfoundland; this is the most important single characteristic of the breed." 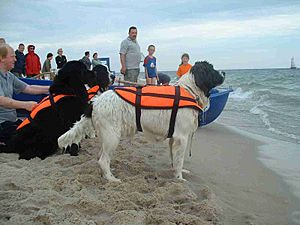 Many tales have been told of the courage displayed by Newfoundlands in adventuring and lifesaving exploits. 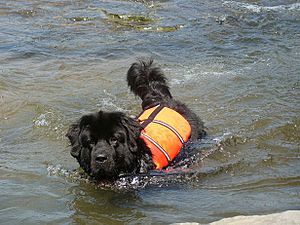 The Newfoundland shares many physical traits with Mastiffs and Molosser type dogs, such as the St. Bernard and English Mastiff, including stout legs, massive heads with very broad snouts, a thick bull neck, and a very sturdy bone structure. In fact, many St. Bernard Dogs have Newfoundland Dog ancestry. Newfoundlands were brought and introduced to the St. Bernard breed in the 18th century when the population was threatened by an epidemic of distemper. They share many characteristics of many mountain dog breeds such as the Great Pyrenees.

The Newfoundland breed originated on Newfoundland, and is descended from a breed indigenous to the island known as the lesser Newfoundland, or St. John's dog. DNA analysis confirms that Newfoundlands are closely related to other Canadian retrievers, including the Labrador, Nova Scotia Duck Tolling Retriever, Golden Retrievers, and Flat Coated Retrievers. The Molosser-like appearance of the Newfoundland are a result of an introduction of Mastiff blood, possibly from breeding with Portuguese Mastiffs brought to the island by Portuguese fishermen beginning in the 16th century.

By the time colonization was permitted in Newfoundland in 1610, the distinct physical characteristics and mental attributes had been established in the Newfoundland breed. In the early 1880s, fishermen and explorers from Ireland and England traveled to the Grand Banks of Newfoundland, where they described two main types of working dog. One was heavily built, large with a longish coat, and the other medium-sized in build – an active, smooth-coated water dog. The heavier breed was known as the Greater Newfoundland, or Newfoundland. The smaller breed was known as the Lesser Newfoundland, or St. John's dog. The St. John's dog became the founding breed of the modern retrievers. Both breeds were used as working dogs to pull fishnets, with the Greater Newfoundland also being used to haul carts and other equipment.

Because of that, they were part of the foundation stock of the Leonberger (which excelled at water rescue and was imported by the Canadian government for that purpose); and the now extinct Moscow Water Dog, a failed attempt at creating a lifesaving dog by the Russian state kennel—the unfortunate outcross with the Caucasian Ovcharka begat a dog more adept at biting than rescuing.

Many tales have been told of the courage displayed by Newfoundlands in adventuring and lifesaving exploits. Over the last two centuries, this has inspired a number of artists, who have portrayed the dogs in paint, stone, bronze, and porcelain. One famous Newfoundland was a dog named Seaman, who accompanied American explorers Lewis and Clark on their expedition.

The breed's working role was varied. Another famous all-black Newfoundland performed as the star attraction in Van Hare's Magic Circus from 1862 and for many years thereafter in one of England's founding circus acts, traveling throughout Europe. The circus dog was known as the "Thousand Guinea Dog Napoleon" or "Napoleon the Wonder Dog." The circus owner, G. Van Hare, trained other Newfoundland dogs to perform a steeplechase routine with baboons dressed up as jockeys to ride them. Nonetheless, his "wizard dog" Napoleon was his favorite and held a special position in the Magic Circus. Napoleon would compete at jumping against human rivals, leaping over horses from a springboard, and dancing to music. 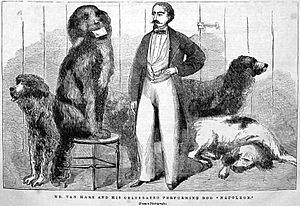 Napoleon the Wonder Dog became a wildly popular act in London from his debut at the Pavilion Theatre on April 4, 1862, and onward until his untimely death many years later when he slipped and fell during a circus practice session. At the peak of his fame, his performance was described in London's Illustrated Sporting News and Theatrical and Musical Review as follows: "Synopsis of his entertainment:-- He spells his own name with letters' also that of the Prince of Wales; and when he is asked what he would say of her Most Gracious Majesty, he puts down letters to form "God save the Queen." He plays any gentleman a game of cards and performs the celebrated three-card trick upon which his master backs him at 100 to 1. Also "The Disappearance," a la Robin. He performs in a circus the same as a trick horse, en liberté, giving the Spanish trot to music, also leaping over bars, through balloons, with numerous other tricks of a most interesting character."

When Napoleon the Wonder Dog died, as a result of a circus accident at the age of 11 years old, his passing was announced in a number of British newspapers, including the Sheffield Daily Telegraph, which mentioned the loss on May 5, 1868, as follows: "DEATH OF A CELEBRATED FOUR-FOOTED ARTISTE. -- Mr. Van Hare's renowned dog, Napoleon, designated 'The Wizard Dog,' died on 24th ult., aged twelve years. He was a noble specimen of the Newfoundland breed (weighing near 200 lbs.) for which he took the prize at the first Agricultural Hall Dog Show. Besides his magnificent appearance and symmetry, he was the most extraordinary sagacious and highly-trained animal ever known. He is now being preserved and beautifully mounted by the celebrated naturalist, Mr. Edwin Ward. -- Era."

The breed prospered in the United Kingdom, until 1914 and again in 1939, when its numbers were almost fatally depleted by wartime restrictions. Since the 1950s there has been a steady increase in numbers and popularity, despite the fact that the Newfoundland's great size and fondness for mud and water makes it unsuitable as a pet for many households.

William Withering, famous for his book on the use of Dropsy published in 1785, lived at Edgbaston Hall, Birmingham between 1786 and 1799. While there, he bred Newfoundland Dogs. There is very little else on his experiments with these dogs. His daughter Charlotte married a Beriah Botfield and they had a painting in Norton Hall by Samuel Cox of Daventry painted about 1830-1840 called "Portrait of Lion, a Newfoundland Dog, and Juba, a Pug Dog of Mrs. Botfield's. This hung in the north front of Norton Hall. This painting would have been made around the same time that Landseer painted his portrait of Lion, the Newfoundland Dog. (See 'Catalogue of Pictures in the possession of Beriah Botfield esq.at Norton Hall' published in London in 1848. 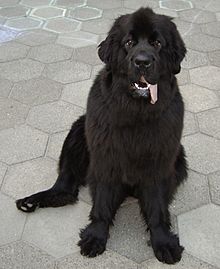 Many Newfoundlands are known to drool in excess, especially in warmer climates or on hot days.

During the Discovery Channel's second day of coverage of the AKC Eukanuba National Championship on December 3, 2006, anchor Bob Goen reported that Newfoundlands exhibit a very strong propensity to rescue people from water. Goen stated that one Newfoundland alone once aided the rescue of 63 shipwrecked sailors. Today, kennel clubs across the United States host Newfoundland Rescue Demonstrations, as well as offering classes in the field. Many harbor boat tours in St. John's have a dog on board for local charm as well as for passenger safety.

The breed continues in that role today, along with the Leonberger, Labrador Retriever and Golden Retriever dogs.

All content from Kiddle encyclopedia articles (including the article images and facts) can be freely used under Attribution-ShareAlike license, unless stated otherwise. Cite this article:
Newfoundland (dog) Facts for Kids. Kiddle Encyclopedia.