The St. Bernard is a very large breed of dog. It was originally bred as a working dog, to rescue people who were lost in the Swiss Alps. Famously, it was believed that they carried a small barrel of brandy around their neck to revive frozen mountaineers. There is no historical evidence that they did actually carry this brandy, although the monks at the St. Bernard Hospice keep some barrels around for photographs with tourists.

It is a very big dog with a big head. A full grown male can weigh between 260 and 345 lb. The largest dog ever was a St. Bernard called Benedictine who weighed 357 pounds.

The coat can be either smooth or rough; the smooth coat being close and flat while the rough is dense, flat, and more profuse around the neck and legs. The colour is typically a red shade with white, or a mahogany brindle with white. Black shading is usually found on the face and ears.

The tail is long and heavy, hanging low.

Eyes are usually brown, but sometimes can be icy blue, and should have naturally tight lids, with haws only slightly visible.

The ancestors of the St. Bernard share a history with the Sennenhunds. The St. Bernard, also called Alpine Mountain Dogs or Alpine Cattle Dogs, are the large farm dogs of the farmers and dairymen of most notably the French Alps, livestock guardians, herding dogs, and draft dogs as well as hunting dogs, search and rescue dogs, and watchdogs. These dogs are thought to be descendants of molosser type dogs brought into the Alps by the ancient Romans, and the St. Bernard is recognized internationally today as one of the Molossoid breeds. 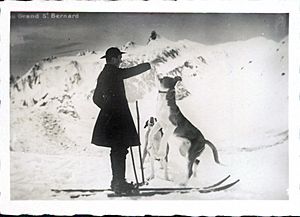 The earliest written records of the St. Bernard breed are from monks at the Great St Bernard Hospice at the Great St. Bernard Pass in 1707, with paintings and drawings of the dog dating even earlier. The first evidence that the dogs were in use at the monastery is in two paintings dating to 1690 by Italian artist Salvator Rosa. The most famous St. Bernard to save people at the pass was Barry (sometimes spelled Berry), who reportedly saved somewhere between 40 and 100 lives. There is a monument to Barry in the Cimetière des Chiens, and his body was preserved in the Natural History Museum in Berne. Another famous dog was Rutor, the faithful companion of the Italian priest , who was named after the peak Tête du Rutor located above the Little St Bernard pass. The classic St. Bernard looked very different from the St. Bernard of today because of cross-breeding. Severe winters from 1816 to 1818 led to increased numbers of avalanches, killing many of the dogs used for breeding while they were performing rescues. In an attempt to preserve the breed, the remaining St. Bernards were crossed with Newfoundlands brought from the Colony of Newfoundland in the 1850s, and so lost much of their use as rescue dogs in the snowy climate of the alps because the long fur they inherited would freeze and weigh them down.

The dogs never received any special training from the monks. Instead, younger dogs would learn how to perform search and rescue operations from older dogs.

The Swiss St. Bernard Club was founded in Basel on 15 March 1884. The St. Bernard was the very first breed entered into the Swiss Stud Book in 1884, and the breed standard was finally approved in 1888. Since then, the breed has been a Swiss national dog.

The dogs at the St Bernard hospice were working dogs that were smaller than today's show St Bernard's dogs. Originally about the size of a German Shepherd Dog, the St Bernard grew to the size of today's dog as kennel clubs and dog shows emphasized appearance over the dog's working ability, along with a closed stud book.

An open stud book would have allowed breeders to correct such errors by breeding in working dogs of other dog breeds. 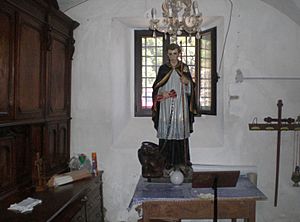 Statue of Bernard of Menthon in Ascona (GE), Italy.

The name "St. Bernard" originates from the Great St. Bernard Hospice, a traveler's hospice on the often treacherous Great St. Bernard Pass in the Western Alps, between Switzerland and Italy. The pass, the lodge, and the dogs are named for Bernard of Menthon, the 11th century Italian monk who established the station.

"St. Bernard" was not in widespread use until the middle of the 19th century. The dogs were called "Saint Dogs", "Noble Steeds", "Alpenmastiff", or "Barry Dogs" before that time.

The collective name for a large group of Saint Bernards is a "floof".

The breed is strikingly similar to the English Mastiff, with which it shares a common ancestor known as the Alpine Mastiff. The modern St. Bernard breed is radically different than the original dogs kept at the St. Bernard hospice, most notably by being much larger in size and build. Since the late 1800s, the St. Bernard breed has been ever refined and improved using many different large Molosser breeds, including the Newfoundland, Great Pyrenees, Greater Swiss Mountain Dog, Bernese Mountain Dog, Great Dane, English Mastiff, and possibly the Tibetan Mastiff and Caucasian Ovcharka. Other breeds such as the Rottweiler, Boxer, and English Bulldog may have contributed to the St. Bernard's bloodline as well. It is suspected that many of these large breeds were used to redevelop each other to combat the threat of their extinction after World War II, which may explain why all of them played a part in the creation of the St. Bernard as seen today.

The Russian army kennels crossbreed St Bernards with Caucasian Ovcharka to produce the Moscow Watchdogs that are still used as military service dogs in Russia today. St Bernards have in common many characteristics of livestock guardian dog breeds.

St. Bernard dogs are no longer used for Alpine rescues, the last recorded instance of which was in 1955. As late as 2004, the Great St Bernard Hospice still retained 18 of the dogs for reasons of tradition and sentiment. In that year the Barry Foundation created breeding kennels for the breed at the town of Martigny down the Great Saint Bernard Pass, and purchased the remaining dogs from the Hospice. During the summer months each year a number of the animals are temporarily relocated from Martigny to the Hospice for viewing by tourists.

An annual celebration of the breed takes place on the Little Saint Bernard Pass and at the town of Rosières-Montvalzan on the French side. Saint Bernard dog enthusiasts and breeders gather for a dog show and parades.

The animals bred by the Foundation are trained to participate in a variety of dog sports including carting and weight pulling. The dogs at the Barry Foundation are reportedly smaller than the average St Bernard.

Known as a classic example of a gentle giant, the Saint Bernard is calm, patient and sweet with adults, and especially children. However St. Bernards, like all very large dogs, must be well socialized with people and other dogs in order to prevent fearfulness and any possible aggression or territoriality. The biggest threat to small children is being accidentally knocked over by this breed's larger size. Overall they are a gentle, loyal and affectionate breed, and if socialized are very friendly. Because of its large adult size, it is essential that proper training and socialization begin while the St. Bernard is still a puppy, so as to avoid the difficulties that normally accompany training large dogs. An unruly St. Bernard may present problems for even a strong adult, so control needs to be asserted from the beginning of the dog's training. While generally not instinctively protective, a St. Bernard may bark at strangers, and their size makes them good deterrents against possible intruders.

The Saint Bernard was bred to be a working companion and to this day the St. Bernard lives to please its master and is an amiable yet hard worker. St. Bernards have retained their natural ability for scent work and depending on the skill of the trainer and the talents of the dog, St. Bernards can participate in tracking events or even become involved in search and rescue work. 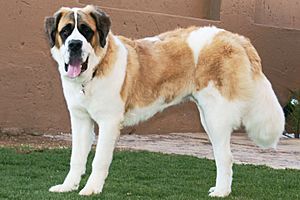 St. Bernards were exported to England in the mid-19th century, where they were bred with mastiffs to create an even larger dog. Plinlimmon, a famous St. Bernard of the time, was measured at 95 kg (210 lbs) and 87.5 cm (341⁄2ins), and was sold to an American for $7000. Commercial pressure encouraged breeding ever larger dogs until "the dogs became so gross that they had difficulties in getting from one end of a show ring to another".

An 1895 New York Times report mentions a St. Bernard named Major F. measuring 8 feet 6 inches (2.59 m) in length, who, if the claims are true, would be the longest dog in history. Another St. Bernard named Benedictine V Schwarzwald Hof (Pierson, Michigan, USA) also reached 315 lb (143 kg), which earned a place in the 1981 edition of the Guinness Book of World Records. 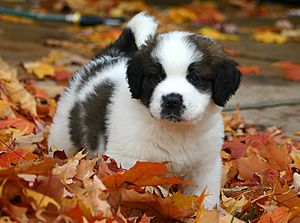 St. Bernards are often portrayed, especially in old live action comedies such as Swiss Miss, the TV series Topper, and classic cartoons, wearing small barrels of brandy around their necks. Avalanche victims supposedly drank the brandy to stay warm while awaiting rescue, although this is medically unsound. The monks of the St. Bernard Hospice deny that any St. Bernard has ever carried casks or small barrels around their necks; they attribute the image to an 1820 painting by Edwin Landseer, perhaps Alpine Mastiffs Reanimating a Distressed Traveler (which became a popular engraving in 1831 by Charles Landseer). The monks did keep casks around for photographs by tourists. 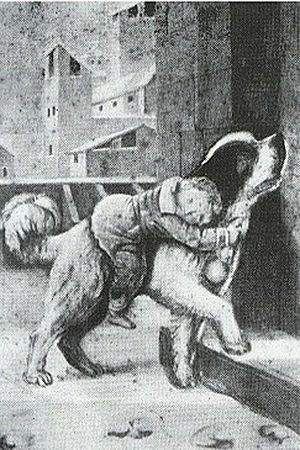 All content from Kiddle encyclopedia articles (including the article images and facts) can be freely used under Attribution-ShareAlike license, unless stated otherwise. Cite this article:
St. Bernard (dog) Facts for Kids. Kiddle Encyclopedia.