The name "Pequannock", as used in the name of the township and of the Pequannock River, is thought to have been derived from the Lenni Lenape Native American word Paquettahhnuake, meaning "cleared land ready or being readied for cultivation". The name "Pompton" has been cited by some sources to mean "a place where they catch soft fish".

The name for the area goes back at least as far as March 1, 1720, when it was referred to as "Poquanick", a precinct in Hunterdon County. Formed as "Poquanock Township" on March 25, 1740, as the county's largest township, what is now a 7.1-square-mile (18 km2) bedroom community composed of Pompton Plains in its northern portion and old Pequannock in its southern was once a vast 176-square-mile (460 km2) region of rural farmland settled by the Dutch after its purchase by Arent Schuyler and associates in 1695 and 1696. The township was incorporated by the New Jersey Legislature's Township Act of 1798 as one of New Jersey's initial group of 104 townships on February 21, 1798.

During the American Revolutionary War, both Comte de Rochambeau and George Washington's troops camped on what is now the site of the Pequannock Valley Middle School. While Washington stayed at the Schuyler-Colfax House in nearby Pompton, unproven oral history states that he attended church services in the First Reformed Church located in Pompton Plains, also known as the Pompton Meeting House, which had been constructed in 1771. The Mandeville Inn, located on the site of where the soldiers had camped during the war, was built in 1788 and was once owned by Garret Hobart, later Vice President of the United States. The stone with the engraved date is now located inside the Pequannock Valley Middle School when the Inn was demolished and replaced with the school in 1950.

During the Civil War, Pequannock was a stop on the Underground Railroad. The Giles Mandeville House (also built in 1788), a field and quarry-stone structure located at 515 Newark-Pompton Turnpike, which is believed to have served as a waypoint for many runaway slaves, still stands today, and has been in use as the Manse of the adjacent First Reformed Church since 1953.

The Township of Pequannock is located in eastern Morris County, along Route 23, approximately 5 miles (8.0 km) north of the interchange of Route 23 with Interstate 80 and U.S. Route 46. Interstate 287 crosses the northwest corner of the township, with a full interchange just north of the township in the borough of Riverdale. Pequannock Township is located 20 miles (32 km) west of New York City.

Unincorporated communities, localities and place names located partially or completely within the township include Pequannock and Pompton Plains, each of which is served by a separate post office of the United States Postal Service.

There were 6,471 households out of which 26.2% had children under the age of 18 living with them, 52.9% were married couples living together, 6.4% had a female householder with no husband present, and 38.4% were non-families. 35.6% of all households were made up of individuals, and 25.5% had someone living alone who was 65 years of age or older. The average household size was 2.40 and the average family size was 3.18. 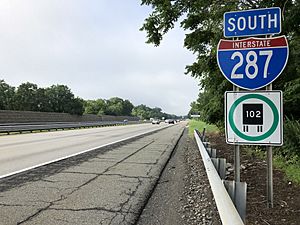 I-287 southbound in Pequannock Township

Two major roadways exist within the township; Interstate 287 crosses the northwest corner and Route 23 runs near the eastern boundary.

The Mountain View and Lincoln Park NJ Transit stations are both near Pequannock, offering service on the Montclair-Boonton Line to Hoboken Terminal. Pequannock Township was formerly served by the Pompton Plains railroad station, which has been added to the National Register of Historic Places.

Bus service is provided by NJ Transit on the 194 line to the Port Authority Bus Terminal in Midtown Manhattan. In September 2012, as part of budget cuts, NJ Transit suspended service to Newark on the 75 line.

Holy Spirit School is a Catholic school serving pre-kindergarten through eighth grade operated under the auspices of the Roman Catholic Diocese of Paterson. In addition, there is Kolbe Immaculata School, a non-diocesan Catholic school for grades 1-8; the Netherlands Reformed Christian School (PK-12); and Chancellor Academy, a school founded in 1983 that serves students in sixth through twelfth grades who have not succeeded in a traditional school structure.

People who were born in, residents of, or otherwise closely associated with Pequannock Township include:

All content from Kiddle encyclopedia articles (including the article images and facts) can be freely used under Attribution-ShareAlike license, unless stated otherwise. Cite this article:
Pequannock Township, New Jersey Facts for Kids. Kiddle Encyclopedia.