Oakland was incorporated as a borough by an act of the New Jersey Legislature on April 8, 1902, from portions of Franklin Township (now Wyckoff). The name comes from the white oak trees in the area.

The Van Allen House was built in 1748 and was a stop for George Washington and his troops in 1777.

From the 1940s through the end of the 1960s a summer bungalow colony was developed in a valley in West Oakland on the Ramapo River. This was a refuge for a close-knit group of several score families from the summer heat of New York City and urban New Jersey. During the summer months the New York, Susquehanna and Western Railroad provided service at a West Oakland passenger station. This colony was located on the road between Oakland and Pompton Lakes, near a training camp for boxers. In the early morning, a resident could see Joe Louis or Sugar Ray Robinson, among others, running past the summer homes.

One section of streets in the town are named after Native American tribes and Native American first names. Now considered politically incorrect, the borough had a wooden sign posted downtown that read "Once there was [sic] Indians all over this place" which had been donated by a resident who insisted on the wording of the sign as having been a quotation from an author.

Unincorporated communities, localities and place names located partially or completely within the borough include Ramapo Lake and Rotten Pond.

The borough borders Franklin Lakes and Mahwah in Bergen County and Pompton Lakes, Ringwood, Wanaque and Wayne in Passaic County.

There were 4,335 households out of which 39.8% had children under the age of 18 living with them, 71.3% were married couples living together, 7.4% had a female householder with no husband present, and 17.7% were non-families. 14.3% of all households were made up of individuals, and 6.4% had someone living alone who was 65 years of age or older. The average household size was 2.89 and the average family size was 3.22.

Recreation is run by an all volunteer nine-member Recreation Commission. All members are appointed by the Mayor for a five-year term. There are a number of municipal recreational facilities in Oakland. The largest is a recreational area located off Oak Street, known to residents simply as the "Rec Field," but formally known as the Alexander Potash Recreation Complex, which is home to nine baseball and softball fields, six tennis courts, a roller hockey rink, basketball courts, and other facilities.

New Jersey's Ramapo Mountain State Forest is located in Oakland and can be accessed from Skyline Drive just north of its interchange with I-287.

Camp Tamarack, which was a year round camp operated by the Boy Scouts of America from the late 1920s until the mid-1980s, sits abandoned off of Skyline Drive. The camp ceased all activities and was taken over by the Bergen County park system in 1998. Many of the structures in the camp have been torn down, but some remain standing. Oakland is the current location of the headquarters of the Northern New Jersey Council.

The Rec Field is home to the annual carnival and fireworks that take place during the summer.

Oakland was ranked by Business Week as #43 on its list of "Great Places to Raise Kids -- for Less", with only two places deemed better than Oakland: Matawan (12th) and Echelon near Philadelphia (4th). The criteria were test scores in math and reading, number of schools, cost of living, recreational and cultural activities, and risk of crime. In 2013 Oakland was ranked by New Jersey Monthly as #1 for Young Families "...Oakland is woodsy and a bit remote, but its midsize homes, good schools and low crime rate make it popular with young families" 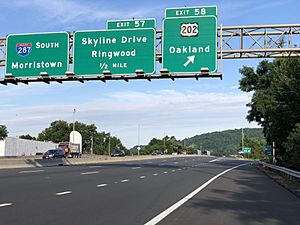 I-287 southbound in Oakland

NJ Transit bus service is also available on a limited basis via the 752 route between Oakland and Hackensack via Ridgewood.

The patch of grass representing the former Oakland Station, which was demolished in 1999, as viewed in October 2011

A rail right-of-way was built by the New Jersey Midland Railway around 1870 and later served passengers on the New York, Susquehanna and Western Railroad (NYS&W). until service was abruptly curtailed in 1966. Plans to restore service have not materialized. The borough is a stop on the annual Toys for Tots train.

There are a few industrial parks in Oakland, the biggest of which is off Long Hill Road near the Franklin Lakes border. The Oakland-McBride Center is the home of Royle Systems Group and of Topcon Medical Systems's United States operations.

Russ Berrie and Company, Inc., once headquartered in Oakland, is a major manufacturer of teddy bears and other gift products, including stuffed animals, baby gifts, soft baby toys and development toys as well as picture, candles, figurines and home fragrance products. Russ Berrie and Company, since renamed to Kid Brands, has since moved to Wayne and from there to East Rutherford.

Students in ninth through twelfth grades for public school attend the schools of the Ramapo Indian Hills Regional High School District, a regional district serving students from Franklin Lakes, Oakland and Wyckoff. Students entering the district as freshmen have the option to attend either of the district's high schools, subject to a choice made during eighth grade. Schools in the district (with 2018–19 enrollment data from the National Center for Education Statistics) are Indian Hills High School, located in Oakland (1,062 students) and Ramapo High School, located in Franklin Lakes (1,222 students). The district's nine-member board of education oversees the operation of the district; seats on the board are allocated based on population, with three of the nine seats allocated to Oakland. Franklin Lakes, Oakland and Wyckoff (FLOW district) approved the creation of a regional high school in 1954 by a vote of 1,060 to 51, with Ramapo High School (in Franklin Lakes) opened in 1957 and Indian Hills High School in 1960.

Private schools include Barnstable Academy, a college preparatory school for students in fifth through twelfth grades located in a business and industrial park off Long Hill Road; The New Jersey Japanese School, which serves Japanese expatriates to prepare them for the Japanese educational system when the students eventually return to Japan, located next to Our Lady of Perpetual Help Church; and the Gerrard Berman Day School (Solomon Schechter of North Jersey), a Jewish day school for students in preschool through eighth grade, located on Spruce Street.

People who were born in, residents of, or otherwise closely associated with Oakland include:

All content from Kiddle encyclopedia articles (including the article images and facts) can be freely used under Attribution-ShareAlike license, unless stated otherwise. Cite this article:
Oakland, New Jersey Facts for Kids. Kiddle Encyclopedia.