Franklin Lakes was formed by an act of the New Jersey Legislature on March 11, 1922, from portions of Franklin Township, based on the results of a referendum held on April 11, 1922. The borough was named for William Franklin, the illegitimate son of Benjamin Franklin, a steadfast Loyalist who served as the last colonial Governor of New Jersey.

The borough borders the Bergen County municipalities of Mahwah, Oakland and Wyckoff, and both North Haledon and Wayne in Passaic County.

There were 3,527 households out of which 40.2% had children under the age of 18 living with them, 76.4% were married couples living together, 6.5% had a female householder with no husband present, and 14.6% were non-families. 12.6% of all households were made up of individuals, and 6.8% had someone living alone who was 65 years of age or older. The average household size was 3.00 and the average family size was 3.29.

Franklin Lakes has been the setting of several reality television shows, including: Bravo network's series The Real Housewives of New Jersey, MTV's My Super Sweet 16, and VH1's My Big Fat Fabulous Wedding. Franklin Lakes was also used for filming the fictional upstate New York town of Dargerville in the Law & Order episode "Knock-Off".

Route 208 runs for 2.2 miles (3.5 km) across the borough's midsection, from Wyckoff to its western terminus at its intersection with Interstate 287 in Oakland. Interstate 287 enters on the borough's western border with Oakland and heads north towards Mahwah,with the highway's exit 59 in the borough. County Route 502 (Breakneck Road / Franklin Lakes Road) enters from Wayne Township in Passaic County at the borough's southwest corner, runs along the border with Oakland and re-enters Franklin Lakes, heading north towards Wyckoff. 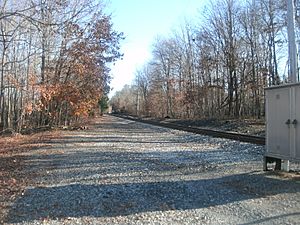 The former Campgaw Station site for the New York, Susquehanna and Western Railway as seen in November 2011. There is nothing left of the station platform or depot.

From the late 1800s until 1966, Franklin Lakes had passenger train service at the Crystal Lakes and Campgaw stations on the New York, Susquehanna and Western Railway.

Franklin Lakes is home to the following locations on the National Register of Historic Places:

All content from Kiddle encyclopedia articles (including the article images and facts) can be freely used under Attribution-ShareAlike license, unless stated otherwise. Cite this article:
Franklin Lakes, New Jersey Facts for Kids. Kiddle Encyclopedia.