From the mid-18th century, what is now Wyckoff was a community within Franklin Township, formed on June 1, 1797, when Saddle River Township (now Saddle Brook) was split, which consisted of most of northern Bergen County west of the Saddle River. Starting in the 1840s, several new municipalities were created from portions of Franklin Township (Pompton Township on April 10, 1797, Hohokus Township (now Mahwah) on April 9, 1849, and Ridgewood Township on March 30, 1876; remaining now the Village of Ridgewood), so that today what is now Wyckoff borders eight different communities. Wyckoff was formed as a township by an act of the New Jersey Legislature on November 2, 1926, replacing Franklin Township, based on the results of a referendum held that day. Portions of Wyckoff were ceded to Midland Park based on the results of a referendum held on June 9, 1931.

Though there is no solid historical evidence for any of the various theories, the most commonly given origin for the name Wyckoff, which was the origin accepted by the township committee when the municipality was established, is that the name is from the Lenape word wickoff, meaning "high ground", or that it is from wickok, meaning "water". However, similarly named Wyckoff Heights in New York City is named after the Wyckoff family, who settled in the New York/New Jersey area when both states were part of the Dutch colony of New Netherlands. Other sources ascribe the name to Wicaugh in Malpas, England.

The first known human inhabitants of the area were the Lenni Lenape Native Americans who lived north of the Raritan River and spoke a Munsee dialect of Algonquian. Sicomac, said to mean "resting place for the departed" or "happy hunting ground", is an area of Wyckoff that, according to tradition, was the burial place of many Native Americans, including Chief Oratam of the Ackingshacys, and many stores and buildings in the community have been named after the area's name, including Sicomac Elementary School. Most Native Americans had left by the 19th century, although a small group lived near Clinton Avenue until 1939.

The first recorded permanent settlers were John and William Van Voor Haze (Voorhees), who purchased 550 acres (220 ha) of land in the area in 1720. Other early settlers (mostly Dutch) included the Van Horns, Terhunes, Ackermans, Quackenbushes, Pulises, and Vanderhoffs. In 1940 the population was just under 4,000 consisting of roughly 100 families with 30% of the land devoted to farming. By 1969 the number of farms had dropped to 13 covering 3 acres (1.2 ha), 6% of the township. By 2012, only two farms remain: Abma's Farm and Goffle Road Poultry Farm, which is Bergen County's only remaining live market. Rail service by the New Jersey Midland Railway began in 1870. That service was purchased by the New York, Susquehanna and Western Railway, which abruptly ended passenger service in 1966.

The Terhune House is an historic home listed on the National Register of Historic Places, located at 161 Godwin Avenue, that was initially constructed in 1737.

In 1994, the Vander Plaat funeral home prepared the body of Richard Nixon for burial.

Unincorporated communities, localities and place names located partially or completely within the township include Sicomac.

The climate in this area is characterized by hot, humid summers and generally mild to cool winters. According to the Köppen Climate Classification system, Wyckoff has a humid subtropical climate, abbreviated "Cfa" on climate maps.

There were 5,646 households out of which 40.6% had children under the age of 18 living with them, 73.2% were married couples living together, 6.8% had a female householder with no husband present, and 17.8% were non-families. 16.1% of all households were made up of individuals, and 10.3% had someone living alone who was 65 years of age or older. The average household size was 2.89 and the average family size was 3.26. 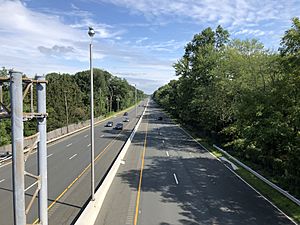 NJ Transit provides service on the 148 route to the Port Authority Bus Terminal in Midtown Manhattan and local bus service on the 722 route and on the 752 route, which operates between Oakland and Hackensack.

Bus service is also provided by Short Line Bus to the Port Authority Bus Terminal in Midtown Manhattan, with some buses providing service across 42nd Street to Second Avenue. 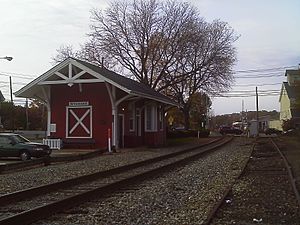 The former station at Wyckoff

The historic Wyckoff railroad station was built by the New Jersey Midland Railway around 1870 and later served passengers on the New York, Susquehanna and Western Railroad (NYS&W). until service was abruptly curtailed in 1966. Plans to restore service have not materialized. The township is a stop on the annual Toys for Tots train.

Houses of worship in the township include:

Wyckoff is home to the following locations on the National Register of Historic Places:

Calvin Coolidge School, located at 420 Grandview Avenue, is an elementary school which opened in 1932 as a six-room K-6 school and has been expanded several times over the years. Eisenhower Middle School was approved in 1960 and dedicated 1963. Since 1993, Eisenhower has served grades 6 to 8. Abraham Lincoln School was dedicated in 1953 on land purchased in 1950. Sicomac School was completed in 1967. George Washington School was constructed as an 11-room brick building on the site where the previous school had burned down.

In the 2003–04 school year, Eisenhower Middle School was recognized with the National Blue Ribbon School of Excellence Award from the United States Department of Education, the highest honor that an American school can achieve.

Public high school students from Wyckoff in ninth through twelfth grades attend the schools of the Ramapo Indian Hills Regional High School District, which also serves students from Franklin Lakes and Oakland. Students entering the district as freshmen have the option to attend either of the district's high schools, subject to a choice made during eighth grade. Schools in the district (with 2017-18 enrollment data from the National Center for Education Statistics) are Indian Hills High School, located in Oakland (1,109 students) and Ramapo High School, located in Franklin Lakes (1,174 students). The district's nine-member board of education oversees the operation of the district; seats on the board are allocated based on population, with four of the nine seats allocated to Wyckoff.

The first public school building in the township was a one-room schoolhouse constructed on Wyckoff Avenue in 1869 and used until 1906. Prior to 1929, high school students attended Paterson Central High School in Paterson, before the Board of Education voted to send students to Ramsey High School in Ramsey instead. Franklin Lakes, Oakland and Wyckoff (FLOW district) approved the creation of a regional high school in 1954 by a vote of 1,060 to 51, with Ramapo High School (in Franklin Lakes) opened in 1957 and Indian Hills High School in 1960.

Public school students from the township, and all of Bergen County, are eligible to attend the secondary education programs offered by the Bergen County Technical Schools, which include the Bergen County Academies in Hackensack, and the Bergen Tech campus in Teterboro or Paramus. The district offers programs on a shared-time or full-time basis, with admission based on a selective application process and tuition covered by the student's home school district.

Saint Elizabeth School serves children grades PreK-8, with an average of 30 kids in each grade and operates under the supervision of the Roman Catholic Archdiocese of Newark. The school was recognized in 2011 with the National Blue Ribbon Award of Excellence by the United States Department of Education.

People who were born in, residents of, or otherwise closely associated with Wyckoff include: ((B) denotes that the person was born in Wyckoff).

All content from Kiddle encyclopedia articles (including the article images and facts) can be freely used under Attribution-ShareAlike license, unless stated otherwise. Cite this article:
Wyckoff, New Jersey Facts for Kids. Kiddle Encyclopedia.