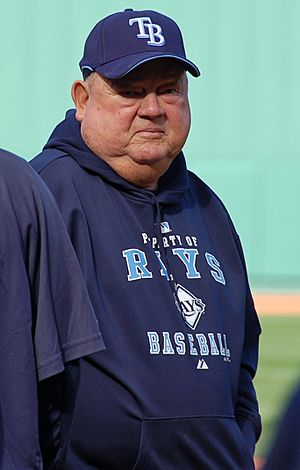 Donald William "Don" Zimmer (January 17, 1931 – June 4, 2014) was an American baseball figure. He was an infielder, manager, and coach in Major League Baseball (MLB). He was involved in professional baseball from 1949 until his death, lasting 65 years. He was best known as an infielder for the Brooklyn Dodgers. He was later known for managing the Boston Red Sox and the Chicago Cubs.

Zimmer was born in Cincinnati, Ohio. He was married to Soot (Jean) from 1951 until Zimmer's death. The couple had two children, Thomas and Donna. In December 2008, he suffered a stroke which caused a loss of speech for a week.

Zimmer died from heart failure as a result of surgical problems on June 4, 2014 in Dunedin, Florida, aged 83.

All content from Kiddle encyclopedia articles (including the article images and facts) can be freely used under Attribution-ShareAlike license, unless stated otherwise. Cite this article:
Don Zimmer Facts for Kids. Kiddle Encyclopedia.