Dunedin /dəˈniːdᵻn/ is a city in Pinellas County, Florida, United States. The name comes from Dùn Èideann, the Scottish Gaelic name for Edinburgh, the capital of Scotland. The population was 35,321 at the 2010 census.

Dunedin is home to several beaches, including Dunedin Causeway, Honeymoon Island, and Caladesi Island State Park, which is consistently rated among the best beaches in the world. Dunedin is one of the few open waterfront communities from Sarasota to Cedar Key where buildings do not completely obscure the view of the Intracoastal Waterway and the Gulf of Mexico beyond; a 1-mile (1.6 km) stretch of Edgewater Drive (also known as Alternate US 19) south of downtown offers views of St. Joseph Sound, Clearwater Beach, and Caladesi Island. Downtown Clearwater and Clearwater Beach are a 6-mile (10 km) drive south on Edgewater.

The downtown business district is notable for its absence of large commercial signage, corporate franchise restaurants or chain retail stores. The Pinellas Trail, a 39-mile-long (63 km) bicycle and pedestrian trail that traverses all of Pinellas County, bisects downtown Dunedin. A large portion of the trail lies on the former roadbed of the Orange Belt Railway, the first railroad in Pinellas County, which arrived in 1888.

Since 1977, Dunedin is the spring training home of the Toronto Blue Jays, as well as the class-A Dunedin Blue Jays of the Florida State League. Dunedin is one of the smallest communities used by Major League spring training teams, although surrounded by a large metropolitan area. Florida Auto Exchange Stadium is situated next to the Dunedin Public Library a few blocks south of downtown on Douglas Avenue, and is just two blocks east of Edgewater Drive. The stadium was built as a replacement to Grant Field, the Blue Jays' first spring training ball park. The library was founded in 1895 and is the oldest public library in Pinellas County.

Until early 2005, Dunedin was the home of Nielsen Media Research's production operations. The city is home to multiple breweries including Dunedin Brewery, Florida's oldest microbrewery. 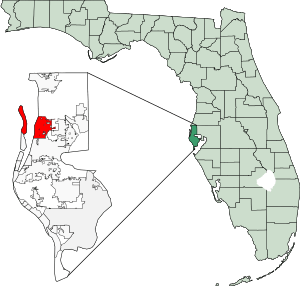 Dunedin is bordered by the city of Clearwater to the south and east, the Gulf of Mexico to the west, and by Palm Harbor (an unincorporated community of Pinellas County) to the north.

There were 17,258 households out of which 18.2% had children under the age of 18 living with them, 43.9% were married couples living together, 8.8% had a female householder with no husband present, and 44.7% were non-families. 37.9% of all households were made up of individuals and 20.6% had someone living alone who was 65 years of age or older. The average household size was 2.01 and the average family size was 2.63.

Scottish families originally settled Dunedin in the nineteenth century. John W. Marston, one of the earliest settlers, was a skilled carpenter and citrus farmer who provided work for many who came to the area. Two Scotsmen, J.O. Douglas and James Sumerville, named the settlement Dunedin, the original name of Edinburgh, their hometown in Scotland. First settled in 1852, Dunedin has the distinction of being the oldest town south of Cedar Key, Florida. With a dock built to accommodate larger sailing vessels, Dunedin became one of Florida's chief seaport and trading centers and at one time it had the largest fleet of sailing vessels in the state.

Dunedin and the Roebling Alligator

During and shortly before World War II the Food Machinery Corporation factory in Dunedin (now demolished) was the primary site for the production of the Landing Vehicle Tracked developed by FMC Dunedin's Engineers and Donald Roebling of Clearwater from Roebling's own Alligator.

Located on Edgewater Drive, the Fenway Hotel is a historic Jazz Age hotel that saw many famous guests throughout its lifetime.

Sister city to Stirling, Scotland, Dunedin has maintained and embraced its Scottish roots. Once a year, Scottish clans descend upon the city for the Dunedin Highland Games. Both Dunedin High School and Dunedin Highland Middle School have competition-level pipe and drum bands. The high school's marching band is known as the Scottish Highlander Band, and both teen and adult members make up the City of Dunedin Pipe and Drum Corps.

In addition to the Highland Games, Dunedin hosts many other annual festivals. The most popular among these is Dunedin's Mardi Gras celebration, during which thousands of visitors descend on the small town.

The City of Dunedin currently operates under a nonpartisan commissioner-manager form of government. The commission comprises four commissioners and a mayor, who are elected by the registered voters under a staggered system.

The chief executive officer, known as the City Manager, oversees the ten departments and the annual budget.

Dunedin boasts an extensive Volunteer Services section, and enables all citizens the chance to have their opinions expressed and tended to. Currently, there are 39 boards and committees that serve as advisory groups to the City Manager and the City Commission.

The city of Dunedin contains a Parks & Recreation Department, which provides low-cost recreation programming to the city's residents. The city operates four recreation facilities, each one designed to provide resources for a specific age group.

In 2007, Dunedin opened its newest and largest recreation facility, the Dunedin Community Center at a cost of just over $10 million. The project was proposed by Kim Marston, a seventh generation Dunedin resident, and mostly paid for by the "Penny for Pinellas" tax. The St. Petersburg Times wrote that Marston "figured that since the county needs recreation programs of its own and the city needs a new community center, why not ask the county to pay for the project in exchange for access to the new facility." Marston's proposal marked a turning point for the city as it saved Dunedin taxpayers millions, and allowed Dunedin officials to replenish vital strategic reserves.

The Dunedin Fine Art Center (DFAC), opened in 1975 has grown to be one of the most renowned centers for visual art instruction and exhibition in the southeastern United States. At nearly 40,000 sq. ft., DFAC houses 5 galleries, 15 studio classrooms, the Gallery Gift Shop, the Palm Cafe and the DLM Children's ART Museum. Tampa Bay Times writer Lennie Bennett says that DFAC is “the artistic equivalent of a village square,” offering quality experiences to people of all ages.

The Dunedin Country Club golf course is semi-private. There are memberships available and the course is open to the public. The course was deeded to the city of Dunedin for recreational purposes in 1930 by the Contract Investment Company.

The city has a large athletic base, with community soccer, baseball, hockey, and softball teams. Dunedin reflected the Gaelic origins of its name by playing host to a short lived American shinty club, Dunedin Camanachd, in the mid-2000s.

The city-owned Dunedin Marina has 194 boat slips and is one of the finest municipal marinas on the West Coast of Florida. The marina is located on the intercoastal waterway between Dunedin Causeway and Clearwater Causeways. It is home to the Dunedin Boat Club, one of Florida’s oldest Sailing Clubs.

All content from Kiddle encyclopedia articles (including the article images and facts) can be freely used under Attribution-ShareAlike license, unless stated otherwise. Cite this article:
Dunedin, Florida Facts for Kids. Kiddle Encyclopedia.