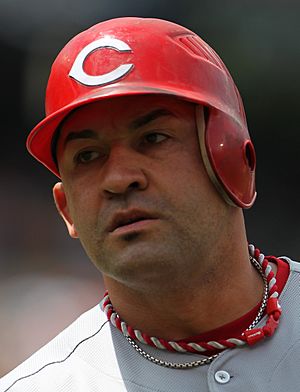 A batting helmet is worn by batters in the game of baseball or softball. It is meant to protect the batter's head from errant pitches thrown by the pitcher. A batter who is "hit by pitch," due to an inadvertent wild pitch or a pitcher's purposeful attempt to hit him or her, may be seriously, even fatally, injured.

Currently, all leagues up to and including Minor League Baseball require the use of a double earflap batting helmet, with certain state amateur leagues being one exception (e.g., South Dakota Amateur Baseball Association). In Major League Baseball, however, only one earflap is required (for the ear closest to the pitcher).

All content from Kiddle encyclopedia articles (including the article images and facts) can be freely used under Attribution-ShareAlike license, unless stated otherwise. Cite this article:
Batting helmet Facts for Kids. Kiddle Encyclopedia.