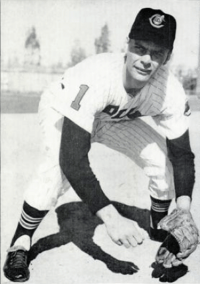 Gerald Donald Kindall (May 27, 1935 – December 24, 2017) was an American professional baseball player. He was born in St. Paul, Minnesota. Kindall played second base in the major leagues from 1956 to 1965 for the Chicago Cubs, Cleveland Indians and Minnesota Twins. He was the former baseball coach of the NCAA's Arizona Wildcats.

All content from Kiddle encyclopedia articles (including the article images and facts) can be freely used under Attribution-ShareAlike license, unless stated otherwise. Cite this article:
Jerry Kindall Facts for Kids. Kiddle Encyclopedia.