It is the home of Ringwood State Park which contains the New Jersey Botanical Garden at Skylands and Skylands Manor, the Shepherd Lake Recreation Area and historic Ringwood Manor.

The Borough of Ringwood was incorporated by an act of the New Jersey Legislature on February 23, 1918, from a "portion of the Township of Pompton", as one of three boroughs formed from Pompton Township, joining Bloomingdale and Wanaque, based on the results of a referendum held on March 22, 1918. The first organizational meeting of the Borough Council took place in the existing Borough Hall on May 6, 1918. The borough was named for an iron mining company in the area.

The Lenape, an Algonquian language-speaking tribe of Native Americans who occupied much of the mid-Atlantic coastal areas and the interior mountains including along the Delaware River resided in the area of present-day Ringwood when Europeans first entered the area. Some retreated to the mountains to escape colonial encroachment.

Colonists called the local band the Ramapough, and named the Ramapo River and other regional features after them. Their descendants and Afro-Dutch migrants from New York were among the people who formed the multiracial group known as the Ramapough Mountain Indians, recognized in 1980 as the "Ramapough Lenape Nation" Native American tribe by the state of New Jersey, though the federal government has denied their application for formal recognition.

Early in the 18th century, colonists discovered iron in the area. The Ogden family built a blast furnace in Ringwood in 1742. By 1765, Peter Hasenclever used Ringwood as the center of his ironmaking operations, which included 150,000 acres (610 km2) in New Jersey, New York and Nova Scotia. Iron mining was prominent in the area from the 18th century until the Great Depression, and iron shafts and pits, landfills and other elements still exist. The London, Roomy, Peters and Hope mines were all originally opened by Peter Hasenclever's London Company. 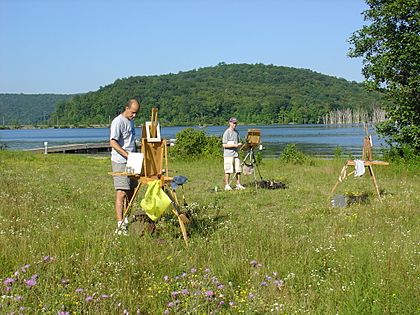 A number of well-known ironmasters owned and lived at Ringwood Manor from the 1740s to the late 19th century. During the American Revolutionary War, Robert Erskine managed ironmaking operations from Ringwood, and became George Washington's first geographer and Surveyor-General, producing maps for the Continental Army. Washington visited the Manor House several times. Ringwood iron was used in the famous Hudson River Chain, and for tools and hardware for the army. One of the Manor's last owners was Abram S. Hewitt, ironmaster, educator, lawyer, U.S. Congressman, and Mayor of New York City. The Manor is part of a National Historic Landmark District.

There were 4,182 households out of which 37.9% had children under the age of 18 living with them, 70.8% were married couples living together, 7.3% had a female householder with no husband present, and 18.4% were non-families. 14.5% of all households were made up of individuals, and 5.1% had someone living alone who was 65 years of age or older. The average household size was 2.90 and the average family size was 3.23.

Depending on where they live, Ringwood residents may be eligible to join one of several private lake communities: assorted lakes in Stonetown, Cupsaw Lake, Erskine Lakes or Skyline Lakes, each of which have annual fees and initiation fees.

Each year on the third Saturday in March, Ringwood holds its annual St. Patrick's Day Parade, the only such parade in Passaic County. Since 1990, the Parade Committee selects a grand marshal and a Citizen of the Year. These chosen outstanding citizens of the community are honored at a Unity Breakfast that precedes the parade. The parade includes bagpipe bands, floats, Irish step dancers, the county sheriff's department with their equestrian unit, local police, and fire and ambulance departments. Other marchers include Girl Scout and Boy Scout troops, local school groups and other recreational teams. The parade ends at the St. Catherine of Bologna Church Parish Center, where the celebration continues with live music and entertainment.

Skyline Drive connects Ringwood and Oakland through Ringwood State Park. There are no state, U.S., or Interstate highways in Ringwood, but I-287 is accessible via Skyline Drive in neighboring Oakland. In June 2013, the first traffic light was installed in Ringwood, at the intersection of Skyline Drive and Erskine Road, though the borough still has no sidewalks or street lights.

NJ Transit bus transportation is available at the Ringwood Park and Ride, located adjacent to Ringwood Public Library. The 196 offers express bus service to and from the Port Authority Bus Terminal in Midtown Manhattan, while the 197 route offers local service, including to the Willowbrook Mall and Willowbrook Park and Ride.

All content from Kiddle encyclopedia articles (including the article images and facts) can be freely used under Attribution-ShareAlike license, unless stated otherwise. Cite this article:
Ringwood, New Jersey Facts for Kids. Kiddle Encyclopedia.