Ramapo is a town in Rockland County, New York, United States. Ramapo, which means "Sweet Water", was formerly known as New Hempstead. As of the 2010 census, Ramapo had a total population of 126,595. If Ramapo were incorporated as a city, it would be the sixth-largest city in the state of New York.

The city's name, recorded variously as Ramopuck, Ramapock, or Ramapough, is of Lenape origin, meaning either "sweet water" or "slanting rocks". Maps referred to Ramapo as Ramepog - 1695,Ramepogh -1711, and Ramapog - 1775. (Romantic Suffern - Chapter 7)

The town is located south of Haverstraw and west of Clarkstown and Orangetown.

The present-day town was originally inhabited by the Munsee, a band of the Lenape nation. Their descendants now live on Stag Hill in Mahwah, New Jersey, where they form the state-recognized Ramapo Lenape Nation.

During the American Revolutionary War, Commander-in-Chief George Washington is said to have climbed the Ramapo Torne (near Sloatsburg) with a telescope to watch the July 24, 1777 sailing of the British fleet off Sandy Hook in New Jersey. General Washington and his troops set up an encampment in Suffern, in the west of Ramapo, due to its strategic location near a local mountain pass. In this encampment were two French soldiers, Jean-Baptiste Donatien de Vimeur, comte de Rochambeau and Gilbert du Motier, Marquis de Lafayette. The encampment was on the path to Yorktown, Virginia, where the final battle of the American Revolution took place.

The Town of New Hempstead was formed from part of the Town of Haverstraw in 1791, eight years after the end of the Revolution. In 1829 the name was changed to Ramapo.

The first railroad line across Rockland County was built in 1841 and ran from Piermont to Ramapo. By 1851, the line was extended to Lake Erie, and was considered an engineering marvel.

Ramapo Iron Works, located near present-day State Route 17 at the base of Terse Mountain, was a producer of first cut nails made in American, wood screws, cotton cloth, and spring steel in the first half of the 19th century. Its founder, Jeremiah H. Pierson, was influential in building the Nyack Turnpike and the New York & Erie Railroad across the county. A cotton mill is still standing on the east side of the road.

In 1916, what would become State Route 59, which reached from Nyack to Spring Valley in 1915, was extended to Suffern and Hillburn.

Ramapo became one of the first cities to use Adequate Public Facilities acts to tier growth and infrastructure together.

In 2006 Money magazine ranked Ramapo as the 49th best place in the United States and the best place in New York State to live. Arts and leisure, business, housing, low crime rates and open spaces/parkland determined the town's ranking. In the category of park space, percentage of land set aside for gardens and parks, the town finished first. Ramapo received the highest rating and one of the best in the country for its open spaces and parkland. 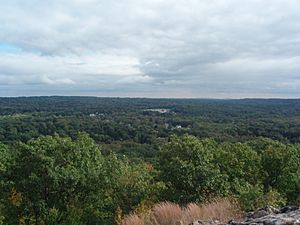 View of Ramapo from mountain

The south town line is the border of New Jersey, and the west town line is the border of Orange County. The break in the Ramapo Mountains at Suffern formed by the Ramapo River causes the town to be the site of the New York State Thruway and I-287, New York State Route 17, and a railroad line. The Palisades Interstate Parkway runs through the northeast corner of the town, with an exit at the Haverstraw town line on the northern border.

Torne Mountain (1,130 ft or 340 m; shown on topographic maps as "High Torne"), in Harriman State Park, overlooks the Ramapo Pass and remnants of the once-thriving Ramapo Iron Works. During the American Revolution, the Torne served as a lookout for British ship movements on the Hudson. Legend tells that Gen. George Washington lost his watch on the mountain, and it may still be heard ticking up there in a crevice of rock.

The highest point in Ramapo is Squirrel Swamp Mountain near the northern border of the town, with an elevation of 1,252 feet (382 m).

There were 31,561 households out of which 42.3% had children under the age of 18 living with them, 64.3% were married couples living together, 10.6% had a female householder with no husband present, and 21.2% were non-families. 17.2% of all households were made up of individuals and 7.1% had someone living alone who was 65 years of age or older. The average household size was 3.37 and the average family size was 3.82. 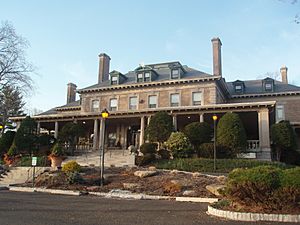 The New Hope Church is a historic Reformed Christian church in Monsey, established in 1824. The congregation continues to meet every Sunday in their building dedicated in 1869.

In August 1887, the Ryan family purchased the former Groesbeck mansion, which was built in the 1860s. The estate was called "Montebello" (which gave its name to the village in which it now lies). It now lies across from Suffern Middle School, which was built in 1942, nearly 80 years after the estate.

The Joseph T. St. Lawrence Community, Health, and Sports Complex (aka "Torne Valley Recreation Center & Fields") was dedicated and opened on November 19, 2006. The facility features a turf multi-purpose field with stands to accommodate 1800 spectators, a separate climate-controlled dome, a 60 x 40 yard, and a turf practice area. It also features three multi-purpose indoor courts, a running track, cardio equipment, weight training machines, two racquetball courts, a computer room, and a dance/aerobic studio. Sports include football, lacrosse, soccer, baseball, and field hockey, as well as year-round sports programs that were not previously available to Ramapo residents. Although the residents of Ramapo have the exclusive right to join the Joseph T. St. Lawrence Community and Health Center, paid memberships are available to others.

The Rockland Boulders are a professional baseball team based just outside the village of Pomona and a member of the Canadian American Association of Professional Baseball, also known as the Can-Am League. Christopher St. Lawrence pushed through the financing of the park even after residents voted it down. A state audit found that taxpayers could be liable for up to $60 million for Provident Bank Park in Ramapo.

In recognition of Ramapo's substantial cultural diversity, former Town Supervisor Herbert Reisman, along with many volunteers from the various communities in Ramapo, started the twinning program. This program is made up of committees that raise funds and organize trips to Ramapo's twin towns around the world, providing local high school students the opportunity to experience life in other lands.

There are currently seven active twinning committees in Ramapo:

All content from Kiddle encyclopedia articles (including the article images and facts) can be freely used under Attribution-ShareAlike license, unless stated otherwise. Cite this article:
Ramapo, New York Facts for Kids. Kiddle Encyclopedia.