Piermont is a village incorporated in 1847 in Rockland County, New York, United States. Piermont is in the town of Orangetown, located north of the hamlet of Palisades, east of Sparkill, and south of Grand View-on-Hudson, on the west bank of the Hudson River. The population was 2,510 at the 2010 census. Woody Allen set The Purple Rose of Cairo, a fictional film within The Purple Rose of Cairo (1984) in Piermont.

The village's name, in earlier years known as Tappan Landing, was given by Dr. Eleazar Lord, author, educator, deacon of the First Protestant Dutch Church and first president of the Erie Railroad. It was derived by combining a local natural feature – Tallman Mountain – and the most prominent man-made feature of the village – the long Erie Railroad pier. 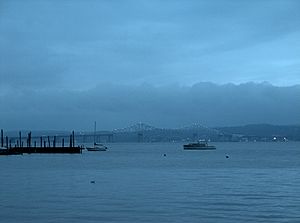 Sparkill Creek cuts through the north end of the Hudson Palisades, providing easy access to the fertile valley of the unnavigable upper Hackensack River. "Tappan Landing," "Tappan Slote", or "Taulman Landing," as the little port on the Hudson River was called, thus became the original port for southern Orange County. The valley in the Palisades created by the creek also provided a way for the Erie Railroad to easily reach the Hudson, and the railroad built a long pier in 1839 as its principal terminal. The pier and the nearby mountains suggested a new name for the community, which was incorporated as a village in 1850. During World War II the pier was the ferry terminal to which troops from Camp Shanks marched and were then transported to New York Port of Embarkation piers for transfer to overseas transports bound for the European Theater. A memorial plaque notes that history at the pier.

Late in the 20th century, Piermont became a modest tourist attraction for day-trippers from New York City, particularly those bicycling on Bike Route 9.

Piermont Railroad Station, located on Ash Street, is a Victorian Stick style structure built in 1873 which served as Piermont's stop for the former Erie Railroad line, which went from Nyack, New York, to Jersey City, New Jersey. The Erie Railroad line stopped running through Piermont in 1966. The rail branch was abandoned in the 1970s as a result of railroad consolidation.

The exterior of the building was renovated to its original architecture and French gray, light-green and oxide-red color scheme in 2006 by the Piermont Historical Society. They replaced the roof and installed a new 9-foot (2.7 m) cupola. The train station was placed on the National Register of Historic Places in 2006.

The Piermont hand-cranked drawbridge, also known as the Sparkill Creek Drawbridge, was originally built in 1880 by the King Iron Bridge Company, a company from Cleveland, Ohio, that constructed more than 10,000 bridges over six decades. The hand-cranked drawbridge is used as a pedestrian walkway providing a link to Tallman Mountain State Park. This bridge is the only hand-cranked drawbridge in Rockland County and perhaps in the United States. Back in the day, fishermen on sloops heading up and down the creek got out of their vessel, cranked up the drawbridge, sailed across, got out of their vessel and cranked down the drawbridge for vehicular traffic. The whole bridge was dismantled piece by piece, sent off-site for restoration and restored to its original state after a complete forensic analysis. Allan King Sloan, the great-great-grandson of the company's founder, provided some of the information that is on the historical marker nearby and attended the dedication ceremony on August 7, 2009.

Piermont is on the west bank of the Hudson River, south of the Tappan Zee Bridge. 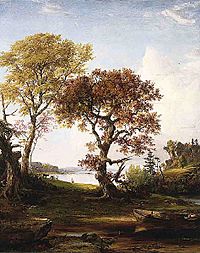 The Hudson at Piermont (1852)
by Jasper Francis Cropsey

There were 1,189 households, out of which 25.0% had children under the age of 18 living with them, 43.7% were married couples living together, 9.4% had a female householder with no husband present, and 43.4% were non-families. 35.5% of all households were made up of individuals, and 6.4% had someone living alone who was 65 years of age or older. The average household size was 2.19 and the average family size was 2.87. 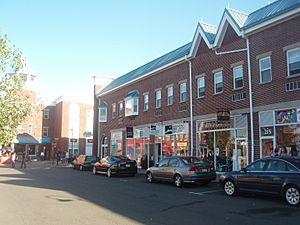 Shops and Galleries in Piermont, NY 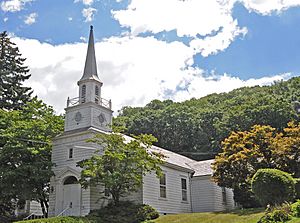 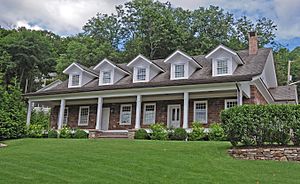 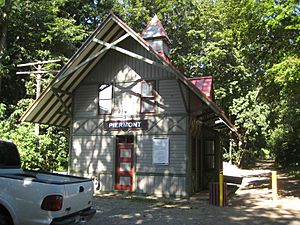 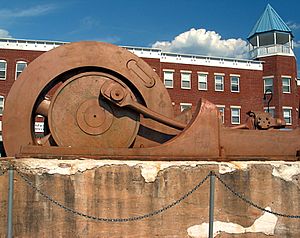 All content from Kiddle encyclopedia articles (including the article images and facts) can be freely used under Attribution-ShareAlike license, unless stated otherwise. Cite this article:
Piermont, New York Facts for Kids. Kiddle Encyclopedia.