Tom Corbett is the main character in a series of Tom Corbett—Space Cadet stories that were depicted in television, radio, books, comic books, comic strips, and other media in the 1950s.

The stories followed the adventures of Corbett, Astro, and Roger Manning (originally; later, T.J. Thistle), cadets at the Space Academy as they train to become members of the Solar Guard. The action takes place at the Academy in classrooms and bunkrooms, aboard their training ship the rocket cruiser Polaris, and on alien worlds, both within the solar system and in orbit around nearby stars.

Joseph Greene of Grosset & Dunlap developed Tom Corbett, Space Cadet, inspired by the Robert A. Heinlein novel Space Cadet (1948) but based on his own prior work. Greene had submitted a radio script for "Tom Ranger" and the "Space Cadets" on January 16, 1946, but it remained unperformed when Heinlein's novel was published. Greene then reworked his radio script into a script for a daily newspaper adventure strip, which was never produced.

Tom Corbett is one of only six TV series to appear on all four networks of the time, along with The Arthur Murray Party, Down You Go, The Ernie Kovacs Show, Pantomime Quiz, and The Original Amateur Hour: 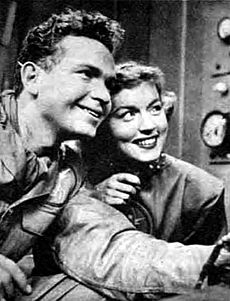 1952–1956 published by Grosset & Dunlap. Written by unknown authors under the pseudonym Carey Rockwell, with Willy Ley as technical advisor.

In 1953 a slim children's book titled Tom Corbett's Wonder Book of Space (or Tom Corbett: A Trip to the Moon) was written by Marcia Martin and published by Wonder Books.

The original Tom Corbett series was published by Dell Comics beginning in their Four Color series, which was used to try out new story lines on the public to obtain feedback. After three tryout issues, Corbett moved to a standalone title which began numbering at #4. Corbett was also featured in a 1953 issue of Boys and Girls March of Comics, published by the K.K. Publications imprint of Western Publishing, with which Dell was partnered. As the popularity of the television series waned, Dell stopped producing the comic book at #11 in 1954, and the series was taken up in 1955 by Prize Comics for three issues. All eleven Dell issues were reprinted in black and white by the UK based World Distributors, with some cover rearrangements and material omissions. The Dell standalone issues were re-released digitally—albeit not in publication order—by Bluewater Comics as Tom Corbett: Space Cadet Classics in 2014–2015. In 2017, PS Artbooks released two volumes as part of their "Pre-Code Classics" line, collecting the first seven Dell issues in volume one, and the remaining four Dell issues along with the three Prize issues in volume two.

The cast for the radio program was the same as for the television series. It ran from January 1, 1952, to June 26, 1952, as a half-hour show twice a week, on Tuesday and Thursday. Each story line would start on Tuesday and end on Thursday. Many of the radio episodes were based on television episodes. A radio version produced in Australia used local actors.

There was a Tom Corbett—Space Cadet View-Master packet containing three reels. Its three-dimensional photographs were brilliantly colored but were taken of sculptures of the characters and models of the spacecraft and props. The story was of finding on the moon a miniature pyramid made by unknown aliens, which led to a clue on Mars, and finally to fighting interplanetary crooks in the asteroid belt.

There were also several coloring books; a punch-out book; a costume for children; a lunch box; a pocket watch; a Space Academy playset with plastic figures; a set of rubber molds for making plaster-of-Paris figures, furniture and vehicles, made by Marx toys; a Little Golden Book; and a Little Golden Record of the Space Academy song ("From the rocket fields of the academy/ to the far flung stars of outer space,/ we are space cadets training to be/ ready for dangers we may face"). Two other records presented Space Cadet adventures, starring the original TV/radio cast: "Tom Corbett Space Cadet at Space Academy" and "Rescue in Space: Tom Corbett, Space Cadet".

The back of boxes of Kellogg's Pep Cereal featured cardboard cutouts of a space cadet cap, gauntlets, and a ray gun, and the cereal company made a direct tie-in with the product Kellogg's Pep: The Solar Cereal. Kellogg also published a "Tom Corbett Space Cadet News", Vol.1 No.1, a 23x15 inch newspaper, folded in half, 4 pages.

The show was the subject of a parody, "Lawrence Fechtenberger, Interstellar Officer Candidate", a serial that made several appearances on programs of Bob and Ray.

All content from Kiddle encyclopedia articles (including the article images and facts) can be freely used under Attribution-ShareAlike license, unless stated otherwise. Cite this article:
Tom Corbett, Space Cadet Facts for Kids. Kiddle Encyclopedia.