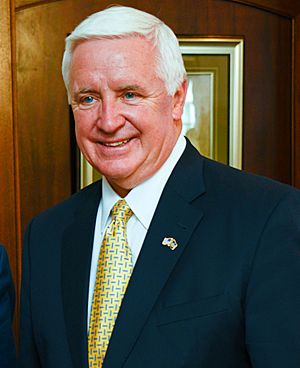 Thomas W. "Tom" Corbett (born June 17, 1949) is an American politician. He was the 46th Governor of Pennsylvania from 2011 to 2015. He was Attorney General of Pennsylvania before that. His performance had mixed reviews. The popularity of him was very low in the polls. He lost his re-election campaign in 2014 to Tom Wolf.

All content from Kiddle encyclopedia articles (including the article images and facts) can be freely used under Attribution-ShareAlike license, unless stated otherwise. Cite this article:
Tom Corbett Facts for Kids. Kiddle Encyclopedia.