Bush was born on June 12, 1924 in 173 Adam Street, Milton, Massachusetts. His father was politician Prescott Bush. He studied at Yale University. In June 1943, Bush became the youngest pilot in the United States Navy at the time.

Bush served in the United States Navy during 1942 until 1945. During WWII, his plane was shot down. He won 3 Air Medal, Presidential Unit Citation, and the Distinguished Flying Cross. He married Barbara Pierce in 1945. They had six children.

Bush worked for Zapata Oil in Texas and was a politician in Texas, running for the Senate in 1964, but losing to Ralph Yarborough and later again in 1970, though losing again to Lloyd Bentsen.

He was later a House Representative. He was also Republican Party Chairman and tried the vice presidency, with the support of such Congressional conservatives as Senator Barry Goldwater after Nixon resigned and Ford took office, but lost to liberal Republican Nelson Rockefeller in 1974. In 1980, Bush also ran against Ronald Reagan for the Republican Party's candidacy for President but lost. He was then named Republican Vice Presidential candidate by Reagan after Reagan defeated him. Reagan and Bush were elected President and Vice President that year.

During World War II, Bush was a crewman on a TBM Avenger. He had survived many crashes and sunk a Japanese ship. He later became a diplomat and head of the CIA.

After being Ronald Reagan's vice president, Bush was elected president in 1988 by defeating Michael Dukakis. While he was president, the Cold War ended and the Soviet Union fell apart. He was known for his failed promise speech "Read my lips: no new taxes". 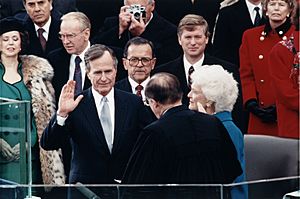 The Inauguration of George H. W. Bush in January 1989

In 1990, Bush's off-hand comments about broccoli caused a minor political controversy. In 1992, he visited Kiichi Miyazawa when he vomited on his lap and soon fainted during a dinner feast. Hours later, Bush made a comment that he was suffering from the flu.

When Saddam Hussein invaded Kuwait in order to steal their supplies of oil, Bush led the United States and many other countries to protect Kuwait. The conflict was called the Gulf War. He also invaded Panama to remove Manuel Noreiga, who was guilty of drug trafficking.

At his home, Bush also signed in important laws, such as the Americans With Disabilities Act. However, the country suffered from a recession. This was embarrassing and many people believe this was the reason he lost the presidential election of 1992 to Bill Clinton. 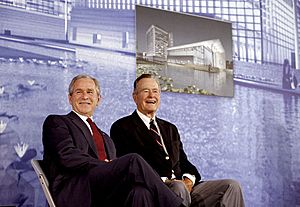 Bush and his son George W. Bush at the 2008 Summer Olympics in Beijing

Bush resided on a ranch in Houston, Texas with his family. After his presidency, he supported John McCain and his son George W. Bush. He supported Mitt Romney and Rick Perry for president. He attended the opening of the USS George H.W. Bush, a naval ship named after him. He traveled with his son to the 2008 Summer Olympics in Beijing, China.

On February 15, 2011, Bush was awarded the Presidential Medal of Freedom, the highest civilian honor in the United States, by President Barack Obama.

He was present at his son's presidential library opening ceremony on April 25, 2013. In July 2013, Bush had his head shaved in a show of support for the two-year-old son of a member of his security detail, who had leukemia. He is the most recent president that was a veteran during World War II.

Bush sent a letter to Donald Trump in January 2017 to inform him of his (Bush's) poor health that he would not be able to attend Trump's inauguration on January 20 and gave his best wishes.

He was the father of George W. Bush, Jeb Bush, and Dorothy Bush Koch. He had two other sons; his other daughter Robin died of leukemia in 1953; his father (also a politician) was Prescott Bush. On April 13, 2013, he became a great grandfather when his granddaughter Jenna Bush Hager gave birth to a daughter.

Bush suffered from a form of Parkinson's disease which forced him to use a motorized scooter or wheelchair to get around, since at least 2012. 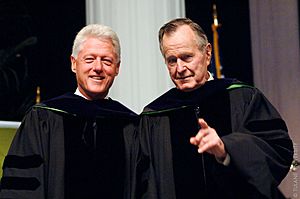 Bush with Bill Clinton in 2006

On November 23, 2012, Bush had a bronchitis-like cough that initially brought him to Methodist Hospital in Houston for treatment. He was supposed to be released before Christmas, but was kept in and over the holiday because he got worse with a high fever. On December 23, 2012, he started to be in the intensive-care unit. On December 29, 2012, his health improved and moved out of intensive care. He was discharged in the hospital on January 14, 2013. On December 23, 2014, Bush was once again hospitalized at the Methodist Hospital after suffering a "shortness of breath". He was released from the hospital on December 30, 2014.

On July 15, 2015, Bush fell at his home in Kennebunkport, Maine and broke a vertebrae in his neck.

On January 18, 2017, he was admitted to the intensive care unit at Houston Methodist Hospital, where he was sedated for a procedure to treat an acute respiratory problem stemming from pneumonia.

On April 22, 2018, after the burial of Bush's wife Barbara, he was hospitalized for sepsis and was placed under intensive care.

Bush died on November 30, 2018 at his home in Houston from Parkinson's-related complications, aged 94. A state funeral was held at the Washington National Cathedral.

Tributes and condolences were offered by former Presidents Jimmy Carter, Bill Clinton, George W. Bush, and Barack Obama, and incumbent President Donald Trump. He lied in state in the United States Capitol and was buried next to his wife at the George Bush Presidential Library.

Since Bush had the same first and last names as his son, he was often called George H. W. Bush or George Bush Sr. (George Bush senior). Some people call him "41" or "Bush 41" because he was the 41st President.

All content from Kiddle encyclopedia articles (including the article images and facts) can be freely used under Attribution-ShareAlike license, unless stated otherwise. Cite this article:
George H. W. Bush Facts for Kids. Kiddle Encyclopedia.