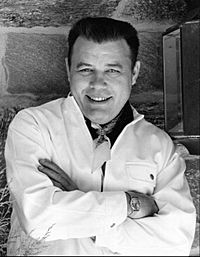 Frank Spencer Sutton (October 23, 1923 – June 28, 1974) was an American actor. He was born in Clarksville, Tennessee. He was best known for his role as Gunnery Sergeant Vince Carter on the CBS television series Gomer Pyle, U.S.M.C.. He enlisted in the U.S. Army during World War II.

All content from Kiddle encyclopedia articles (including the article images and facts) can be freely used under Attribution-ShareAlike license, unless stated otherwise. Cite this article:
Frank Sutton Facts for Kids. Kiddle Encyclopedia.