Spring Valley is a suburb of New York City, a village in the towns of Ramapo and Clarkstown in Rockland County, New York, United States. It is located north of Chestnut Ridge, east of Airmont and Monsey, south of Hillcrest, and west of Nanuet. The population was 33,066 at the 2020 census, making it the 2nd most populous community in Rockland County, after New City. 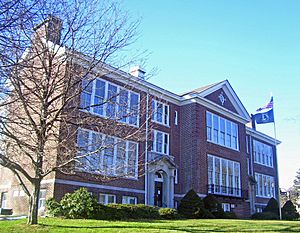 Before the opening of the railroad, there were no homes in Spring Valley.

In 1842, the New York & Erie Railroad called this part of the territory "Pascack", after a stream by the same name. The residents of the area decided to call the place Spring Valley – one certain large spring in the Valley Pond being responsible for the name. Prior to naming the territory Spring Valley, it was called Scotland, named after their homeland, by Scotsmen who had settled in the area.

In 1885, E. P. Lespenasse, of Spring Valley, walked from Haverstraw, New York to Washington, D.C. to settle an election bet. He carried a live pig and a rooster on his month-long journey. Lespenasse sold over 600 copies of picture post cards of himself and the animals he carried before the start of his walk and along the way as souvenirs and to support his journey.

In 1914, President Theodore Roosevelt, visited Spring Valley to discuss the political issues of the day, speaking at Lyceum.

In 1923, the Edwin Gould Foundation was incorporated. The Lakeside School for Girls and the Kingsland Industrial Schools for Boys opened on South Main street.

In 1929, Governor Franklin Delano Roosevelt was the principal speaker at the Fourth of July celebration in Spring Valley.

In 1948, President Harry S. Truman stopped at Spring Valley while touring the country in the last whistle-stop campaign by train.

Around World War II, Spring Valley had summer resorts that had many New York City Jewish people as customers. After World War II large resorts in the Catskill Mountains and other areas began to attract Jews instead leaving the Spring Valley hotels empty. William Casey, Rockland County historian, said that many Hasidic groups began to settle during this period.

The final steam locomotives on the Erie Railroad were commuter engines that ran between Jersey City and Spring Valley. Steam last operated on the Erie on March 17, 1954, when the fires were dropped on K-1 class Pacific locomotive No. 2530.

In 2007, Spring Valley Mayor George Darden was elected vice president of the World Conference of Mayors during the organization's 23rd annual mayors' conference held in Port-au-Prince, Haiti. The organization includes mayors from the National Conference of Black Mayors and the Union of African Villages, whose goal is to foster constructive relationships among mayors around the world.

On November 3, 2009, Noramie Jasmin was elected mayor of Spring Valley, making her the first Haitian-American mayor in the history of New York state.

On August 4, 2014, Mayor Demeza Delhomme was locked up in the county jail after a state Supreme Court justice found him in contempt of a court order to open the village's civic center to host its summer camp.

On January 20, 2015, three village residents filled a lawsuit with the Supreme Court of the State of New York Appellate Division suing Mayor Demeza Delhomme, alleging misconduct and malfeasance in an attempt to remove him from office. Papers filed with the state Supreme Court's Appellate Division spell out numerous allegations against Delhomme, whose tenure as mayor since December 2013 has been filled with confusion and conflict. The claims include religious discrimination, personal use of village funds and harassment of village officials.

Revitalization measures are currently underway in the downtown area of the village, including a mass demolition of abandoned buildings on Main Street and the construction of new mixed-use commercial/residential buildings in its place.

For over 50 years, Spring Valley was the site of a military parts distributor, Sarafan Auto Supply, which supplied military parts all around the world. This third-generation business became part of the community; as business expanded, it grew to take up a large portion of the industrial section of the downtown area. Recently the business moved out of Spring Valley, but the lot which it occupied still has many of the original buildings built by Jacob Sarafan in the early 1900s.

The village is about 5 miles (8 km) north of the New Jersey border. 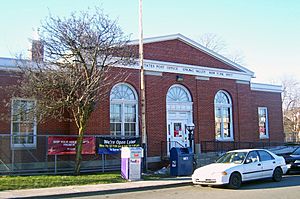 All content from Kiddle encyclopedia articles (including the article images and facts) can be freely used under Attribution-ShareAlike license, unless stated otherwise. Cite this article:
Spring Valley, New York Facts for Kids. Kiddle Encyclopedia.