Haverstraw is a town in Rockland County, New York, United States, located north of the Town of Clarkstown and the Town of Ramapo; east of Orange County, New York; south of the Town of Stony Point; and west of the Hudson River. The town runs from the west to the east border of the county in its northern part. The population was 36,634 at the 2010 census. The name comes from the Dutch word Haverstroo meaning "oats straw", referring to the grasslands along the river. The town contains three villages, one of which is also known as Haverstraw. Haverstraw village is the original seat of government for the town, hosting the area's historic central downtown business district and the densest population in northern Rockland County.

In 1609, the region was explored by Henry Hudson. A land purchase was made in this town in 1666 from local natives and confirmed as a patent in 1671. The region was known as Haverstroo, meaning "oat straw" in Dutch.

During the American Revolution, it served as an important lookout for British activities on the Hudson. A blue-marked trail, the Long Path, may be taken 2 miles (3 km) eastward from Central Highway along the crest of South Mountain to High Tor. Halfway is Little Tor, the second highest peak on South Mountain.

In 1826 the town was the site of a short-lived effort to establish a Owenite colony called the Franklin Community. Underfinanced and wracked by internal dissent, the model Owenite community folded after a mere five months of operation. 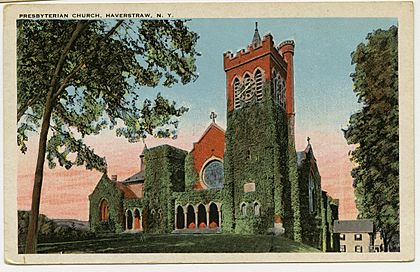 There were 11,255 households out of which 37.3% had children under the age of 18 living with them, 54.4% were married couples living together, 15.0% had a female householder with no husband present, and 26.0% were non-families. 21.3% of all households were made up of individuals and 7.8% had someone living alone who was 65 years of age or older. The average household size was 2.94 and the average family size was 3.43.

New York Central's West Shore Railroad began operations along the banks of the Hudson in 1883 and operated passenger service between Albany and Weehawken Terminal in Weehawken, New Jersey, where passengers could transfer to ferries to Manhattan. Service was discontinued in 1959. The right of way is still used for freight and is known as the River Line. Conrail operated the system until its dissolution. It is now part of the CSX River Subdivision which runs between North Bergen Yard in New Jersey and Selkirk, New York.

Historical figures who have visited Haverstraw

Aaron Burr, third Vice President of the United States, was a frequent visitor to this area. It is said that Aaron Burr studied law at the office of Thomas Smith, owner of the Belmont House (Treason House), which was occupied by his brother, Joshua Hett Smith – the location where Major André, accompanied by Benedict Arnold who commanded West Point, had agreed to surrender West Point to the British for £20,000 ($1.1M in 2008 dollars). Legend says that Aaron Burr carved his initials in the mantel at the Treason House. The Haverstraw Post Office now stands were the office once stood.

General Marie Joseph Paul Yves Rock Gilbert du Motier, better known as the Marquis de Lafayette, was a Revolutionary War hero and a leader of the Garde Nationale during the French Revolution. His camp was located on a hill in the western area of Haverstraw and the site has since been known as Camp Hill.

Henry Lee III (January 29, 1756 – March 25, 1818) was an early American patriot who served as the 9th Governor of Virginia and a member of the U.S. House of Representatives from Virginia's 19th district. During the American Revolution, Lee served as a cavalry officer in the Continental Army and earned the name Light-Horse Harry Lee. He engaged in battle with the British on land behind Lady Warren Fire House where the pond now is. He was also the father of Confederate general Robert E. Lee.

Haverstraw was known as a favorite hang out for baseball's immortal Babe Ruth during the 1920s and he even recorded a silent film there early in the decade.

All content from Kiddle encyclopedia articles (including the article images and facts) can be freely used under Attribution-ShareAlike license, unless stated otherwise. Cite this article:
Haverstraw, New York Facts for Kids. Kiddle Encyclopedia.