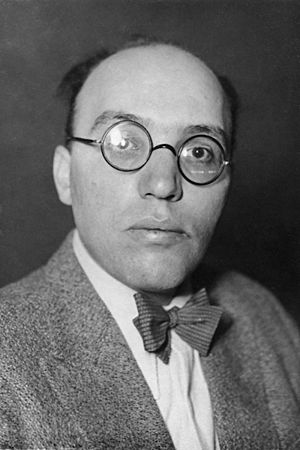 Kurt Weill (born Dessau, 2 March 1900; died New York, 3 April 1950), was a German composer who later became an American. Although he was trained as a composer of classical music he wrote many songs in a popular, jazzy style.

He is particularly remembered for the music he wrote for the plays of the German dramatist Bertolt Brecht, as well as for musicals he wrote when he lived in New York. He also wrote symphonies and chamber music, especially during his early career.

Weill had to flee from Nazi Germany in March 1933. As a famous and popular Jewish composer, he was a target of the Nazi authorities

The rest of his life he spent writing for the American stage. He became a naturalized citizen of the United States in 1943. He thought most of his compositions in Germany had been destroyed by the Nazis. He never spoke German again except when writing to his parents who had escaped to Israel.

Weill suffered a heart attack shortly after his 50th birthday and died on April 3, 1950, in New York City. He was buried in Mount Repose Cemetery in Haverstraw, New York.

Sixty years after his death, Weill's music continues to be performed both in popular and classical contexts. The Kurt Weil Centre in Dessau was founded in 1993. It provides a museum, library, archive and media centre and organises an annual festival celebrating the composer's work.

All content from Kiddle encyclopedia articles (including the article images and facts) can be freely used under Attribution-ShareAlike license, unless stated otherwise. Cite this article:
Kurt Weill Facts for Kids. Kiddle Encyclopedia.