Stony Point is a town in Rockland County, New York, United States. It is part of the New York City Metropolitan Area. The town is located north of the town of Haverstraw, east and south of Orange County, and west of the Hudson River and Westchester County. The population was 15,059 at the 2010 census. The name of the town is derived from a prominent projection into the Hudson River.

The town is in the northeastern part of the county. U.S. Route 9W, U.S. Route 202, and the Palisades Interstate Parkway are major north-south routes through the town. Stony Point is included in the North Rockland Central School District. It is the most rural of the five towns in Rockland County. 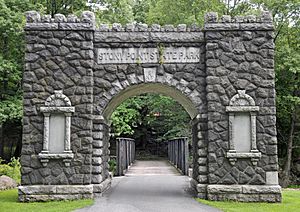 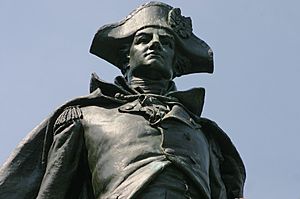 During the American Revolution, the King's Ferry in Stony Point linked New York and the southern colonies with New England; it was used many times by George Washington's Continental Army, and in 1781 Washington's French allies used it on their way to the Battle of Yorktown.

The economy of the town increased upon the rediscovery of limestone deposits in the 19th century. The town of Stony Point was founded in 1865 from the northern part of the town of Haverstraw. 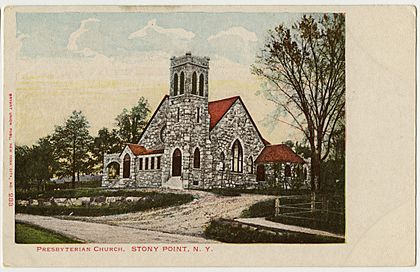 Communities and locations in the Town of Stony Point

The ex-New York Central's River Subdivision follows the west bank of the Hudson River through Stony Point. The line is now operated by CSX Transportation, the fourth railroad to operate the line. The only company served by CSX in the town is the Mirant Lovett Generating Station, which receives trainloads of coal approximately once per week. The power station owns and operates its own railroad to bring the coal from the siding at milepost (MP) 38 into the plant. A talking defect detector, which scans the axles of passing trains for problems, is located in Stony Point. On average, between 20–25 trains pass through Stony Point per day. CSX runs six container stack trains a day. Once per week, a garbage train from the Bronx brings trash up north to burn for power. On a normal day on the River Line, one will see mostly manifest freight trains and tankers. The Auto Rack express brings cars to their owners in either New Jersey or northern New York. CSX trains run five to fifteen minutes apart. The longest wait is mostly one hour. There are only two trestles in Stony Point.

The Palisades Interstate Parkway passes through the town. 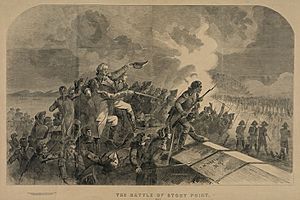 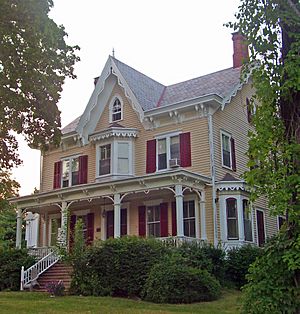 All content from Kiddle encyclopedia articles (including the article images and facts) can be freely used under Attribution-ShareAlike license, unless stated otherwise. Cite this article:
Stony Point, New York Facts for Kids. Kiddle Encyclopedia.