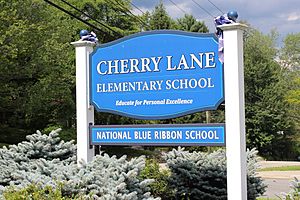 Cherry Lane Elementary, one of the five elementary schools within the Ramapo Central School District, was awarded the National Blue Ribbon of Excellence award in 2013. The elementary serves much of Airmont.

Airmont is a village in the town of Ramapo, Rockland County, New York, United States, located north of the state of New Jersey, east of Suffern, south of Montebello, and west of Chestnut Ridge. The population was 8,628 at the 2010 census.

The village of Airmont, incorporated in 1991, is a consolidation of the hamlets of Tallman, Airmont and South Monsey. Joseph Berger of The New York Times said in a 1997 article that Airmont was one of several town of Ramapo villages formed "to preserve the sparse Better Homes and Garden [sic] ambiance that attracted them to Rockland County." In 2005, Peter Applebome of The New York Times said that Airmont was "slapped around enough by the courts to be something other than a virginal player in any discrimination case" since it ran into legal resistance to its development laws.

In April 1991, the town of Ramapo allowed the creation of the village of Airmont. Airmont had 9,500 people, including around 250 Orthodox Jews and many non-Orthodox Jews. The founders of the town said that they intended for "strong zoning" to preserve the character of the community. William P. Barr, the United States Attorney General, and Otto G. Obermaier, the United States Attorney for the Southern District of New York, filed a suit against Airmont and the village of Ramapo; Barr and Obermaier said that Airmont created a zoning plan intended to exclude Orthodox Jews from living in the village and "that other individuals acting at the behest of the defendants have engaged in a pattern of harassment against Orthodox Jews in the village." The officials cited the Fair Housing Act as the relevant law. The plaintiffs said that, because many Orthodox do not travel by car on Saturdays, preventing the creation of a synagogue would exclude Orthodox from the community. The Anti-Defamation League of B'nai B'rith supported the suit. The Spring Valley Chapter of the National Association for the Advancement of Colored People had opposed the creation of Airmont. As a result of the suit Airmont revised its zoning code to allow religious sites. Airmont's zoning restricted synagogues to 2-acre (8,100 m2) lots, which were too costly for most Orthodox congregations. A federal judge ruled that the code was discriminatory and ordered Airmont to revise the code; the legal case continued by 1997.

Around 2005, Congregation Mischknois Lavier Yakov proposed building a yeshiva and a boarding school with a 70-adult student dormitory (with provisions for their families, which could result in a population of several hundred individuals) on 19 acres (77,000 m2) of land. Town residents opposed this, causing legal action including meetings and lawsuits. In 2005, the U.S. federal government filed a civil rights lawsuit accusing Airmont of discriminating on the basis of religion and violating the Religious Land Use and Institutionalized Persons Act (RLUIPA) and the Fair Housing Act by banning boarding houses.

In 2011, Airmont and the federal government reached a settlement and Airmont agreed to amend its zoning code to allow Mischknois Lavier Yakov to build a school with student housing. The agreement included a $10,000 civil penalty against Airmont and marked the second time federal prosecutors had intervened in Airmont zoning affairs since its 1991 incorporation.

According to the United States Census Bureau, the village has a total area of 4.6 square miles (12.0 km2), all of it land.

The south boundary of the village is the border of New Jersey.

There were 2,342 households out of which 41.8% had children under the age of 18 living with them, 78.0% were married couples living together, 5.9% had a female householder with no husband present, and 13.2% were non-families. 11.3% of all households were made up of individuals and 5.8% had someone living alone who was 65 years of age or older. The average household size was 3.20 and the average family size was 3.47.

According to Cole's History of Rockland County, published in 1884, Tallman was named for Tunis Tallman, who opened a store there in 1836. Tunis was a direct descendant of Rockland's oldest family. 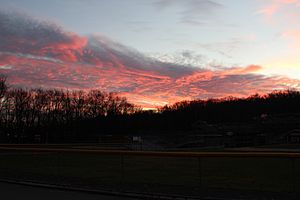 Taken from the parking lot behind Christopher Konkowski Memorial Field at Rella Fields in Airmont in December 2014.

Landmark and places of interest

All content from Kiddle encyclopedia articles (including the article images and facts) can be freely used under Attribution-ShareAlike license, unless stated otherwise. Cite this article:
Airmont, New York Facts for Kids. Kiddle Encyclopedia.