Sloatsburg is a village in the town of Ramapo in Rockland County, New York, United States. Located east of Orange County, it is at the southern entrance to Harriman State Park. The population was 3,039 at the 2010 census. The village is named after Stephen Sloat, an early European landowner.

The land that would become the village of Sloatsburg was part of the hunting grounds of the Minsi band of the Leni Lenape Indians, whose people occupied much of the mid-Atlantic area at the time of European encounter. The area was the site of a major Indian path through the Ramapo Mountains. The path was later improved as the New York to Albany road and, in 1800, the Orange Turnpike. It remains an important thoroughfare today as the New York State Thruway, New York State Route 17 and the Norfolk Southern Railway line run along its route.

Wynant Van Gelder, an ethnic Dutch colonist, purchased the area from the Minsi in 1738. In 1747, he gave it to his father-in-law, Isaac Van Deusen. When his daughter Marritge Van Deusen married Stephen Sloat, Isaac gave the couple the land in 1763. They built a stone house on the property and operated a tavern, which was a regular stop on the New York-to-Albany stage route. During the American Revolution, the Sloat House was headquarters for American troops stationed in the Ramapo Pass. The house is a private residence, listed on the National Register of Historic Places.There he established Sloat's Tavern, which became a regular stop on the New York to Albany stage route.

Sloatsburg, originally Pothat, was named after the Sloat family. During the American Revolutionary War, the stage route became an important military route and the Ramapo pass an important strategic point, occupied by American troops throughout the war. George Washington traveled through the area several times and stayed in Sloat's Tavern at least once, on June 6, 1779.

After the war, the Sloats added a tannery and a cotton mill. One of the sons, Jacob Sloat, was a gifted mechanic. He opened a mill in 1815 for making cotton cloth, importing cotton from the South. He successfully turned to making exclusively cotton twine after patenting a process for dressing it in 1840. At peak, he produced around 8,000 pounds (3,600 kg) of twine per week. The family operated the mill until the Civil War, when it close temporarily for lack of cotton. It was one of numerous mills near New York City that produced cotton textiles; in 1860 half the exports from New York were cotton products. The mill ceased operations in 1878, after the South developed its own textile mills.

In the early 19th century, Abram Dater built an iron forge on the Ramapo River, and a grist mill and a saw mill soon followed. Between 1836 and 1841, the Erie Railroad built a line through Sloatsburg, resulting in a major increase in the population and prosperity of the village. After the Civil War, the village prospered until the great flood of 1903 destroyed most of the factories in the town. First built close to the river for its water power, many were never rebuilt.

During Prohibition, Sloatsburg's rural setting and proximity to New York City made it an attractive location for stills and bootlegging. In 1929, with a population of 1,559, Sloatsburg was incorporated as a village, with David Henion elected as the first mayor.

The rise of the automobile early in the 20th century had a profound impact on the area. Prior to construction of the New York State Thruway and the Palisades Parkway in the 1950s, Sloatsburg was cut in half by automobile traffic, which could back up for miles in the 1940s and 1950s on the Orange Turnpike. Over the Fourth of July weekend in 1952, the backup extended for 8 miles (13 km).

On May 26, 2012, the close-knit congregation of the United Methodist Church celebrated its 175th year.

The western part of the village borders Orange County. 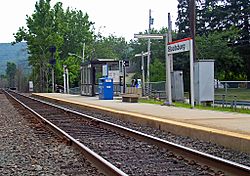 Sloatsburg station provides Metro-North train service on the Port Jervis Line to Hoboken - where connecting PATH train service is available to New York and Jersey City - and to Secaucus, the connecting point to New York Penn Station and points in New Jersey. In the opposite direction, the line goes to Port Jervis. Sloatsburg is the western terminus for Transport of Rockland's bus line number 93.

Four properties in Sloatsburg, all associated with the Sloat family, have been listed on the National Register of Historic Places. There are some other sites of historical interest in the village. 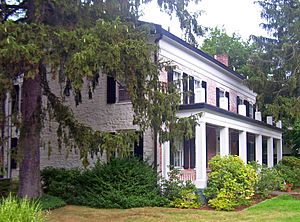 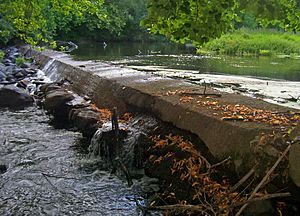 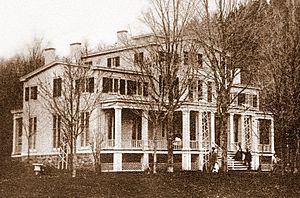 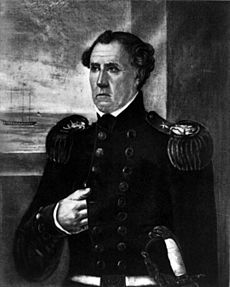 All content from Kiddle encyclopedia articles (including the article images and facts) can be freely used under Attribution-ShareAlike license, unless stated otherwise. Cite this article:
Sloatsburg, New York Facts for Kids. Kiddle Encyclopedia.