Monsey ( Yiddish: מאנסי) is a hamlet and census-designated place in the town of Ramapo, Rockland County, New York, United States, located north of Airmont, east of Viola, south of New Hempstead, and west of Spring Valley. The village of Kaser is completely surrounded by the hamlet of Monsey. The 2020 census listed the population at 26,954.

The hamlet has a large, and growing, community of Orthodox Jews. 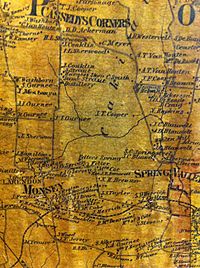 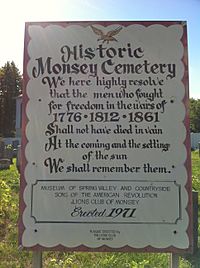 Rockland County was inhabited by the Munsee band of Lenape Native Americans, who were speakers of the Algonquian languages. Monsey Glen, an Indian encampment, is located west of the intersection of State Route 59 and State Route 306. Numerous artifacts have been found there and some rock shelters are still visible. The Monsey railroad station, which received its name from an alternate spelling of the Munsee Lenape, was built when the New York & Erie Railroad passed through the glen in 1841.

Located near Monsey is the Houser-Conklin House, listed on the National Register of Historic Places in 2010.

Monsey is a major center of Orthodox Judaism in the United States, along with Kiryas Joel, Kaser, Spring Valley, and New Square. It is the largest center of Hasidic Judaism in the United States outside of New York City, with approximately 5,400 households (4.2% of the world's Hasidic population). The migration to Monsey began in the late 1940s when New York City's Orthodox Jews were seeking affordable real estate for their quickly growing communities. These spaces offered the possibility of moving en masse and establishing enclaves where they could lead lives based on halakha (Jewish religious law) without coming into regular conflict with their non-Orthodox neighbors. This represented a major, distinct suburban demographic shift for these communities. Major Hasidic sects represented in Monsey include Satmar, Vizhnitz Monsey, and Belz, with the Rebbes of Berditchev, Lizensk, Lizensk (Rokeah), Nikolsburg, Sambor Yerushalayim-Monsey, Sassov, Shinave, Spinka Monsey, Stanislov, and Vizhnitz Monsey sects being resident in the community.

On December 28, 2019, Monsey was the site of a mass stabbing in the home of a Hasidic rebbe of the Koson sect who was hosting a Hanukkah party, leaving four injured and one fatality.

Botbyl, Helyne R. (1968). The Patriarch of Monsey. The Museum of Spring Valley and Countryside.

All content from Kiddle encyclopedia articles (including the article images and facts) can be freely used under Attribution-ShareAlike license, unless stated otherwise. Cite this article:
Monsey, New York Facts for Kids. Kiddle Encyclopedia.