Totowa was formed as a borough by an act of the New Jersey Legislature on March 15, 1898, from portions of Wayne Township and the now-defunct Manchester Township.

In 1696, George Willocks, a Scottish land speculator, purchased a tract of land known as Willock's Patent, which included most of modern-day Totowa Borough. Located in the western part of Manchester Township, Willocks Patent was resold to Anthony Brockholls and the Van Houtens. The land was titled the "Totowa Patent," and divided into three parcels. The Totowa Patent and land acquired through the "Garret Mountain Purchase" included modern-day Totowa, Woodland Park (formerly West Paterson) and Little Falls.

In 1895, residents of the southern section of Manchester Township began to become disenchanted with governing officials, and following the election of 1896, many independent municipalities were formed. The formation of the Borough of Totowa was discussed at the Willard Park Hotel on Totowa Avenue, and headed by brothers Joseph and Robert Boyle. On March 15, 1898, the Borough of Totowa was officially incorporated under Chapter 56 of the Laws of New Jersey, signed by Governor John Griggs. On April 12, 1898, the first election of the Borough of Totowa was held at the Willard Park Hotel, which would become the unofficial town hall until the municipal building was completed in 1910.

As of the 2000 Census, 37.2% of town residents were of Italian ancestry, the seventh-highest percentage of any municipality in the United States, and second-highest in New Jersey (behind Hammonton, at 45.9%), among all places with more than 1,000 residents identifying their ancestry. 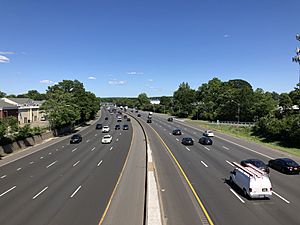 I-80 eastbound in Totowa 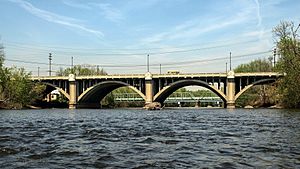 NJ Transit provides bus service to and from the Port Authority Bus Terminal in Midtown Manhattan on the 193 and 197 routes, and local service on the 712 route. Train service is available on the Montclair-Boonton Line at the Little Falls station.

Totowa is located within the New York media market, with most of its daily papers available for sale or delivery. The area is also served by The Record and The Star-Ledger, which cover northern New Jersey.

A segment of the April 12, 2013 episode of the American version of the reality television series Undercover Boss was filmed in Totowa. In the segment, Tony Wells, the CMO for the home security provider ADT, visits Totowa to pose as a new employee being trained as a local sales representative.

Big M, a privately held American clothing retailer which operates the brands Mandee, Annie Sez and Afaze, is based in Totowa. Big M filed for bankruptcy protection in 2013, precipitated by damage from Hurricane Sandy.

The headquarters of Greater Community Bancorp was located in the borough. The bank operated 16 branches in North Jersey until its 2008 acquisition by Valley National Bank.

The Totowa Police Athletic League (PAL) is a volunteer organization that offers several sports to the children of Totowa from pre-kindergarten to eighth grade. Established in 1952, the PAL strives to provide children throughout the borough with the fellowship of sports. These include baseball, softball, basketball, soccer, football, hockey, and cheerleading. Although the Totowa PAL is independent from the Borough of Totowa, it uses fields and facilities owned by the municipality. Meetings, registrations, and events are held at the PAL building, built in 1963 and located on Chamberlain Avenue.

In 1961–62, the New York Gladiators of the short-lived National Bowling League rolled its home matches at "Gladiator Arena", a converted movie theater in Totowa.

Public school students in pre-kindergarten through eighth grade are educated by the Totowa Borough Public Schools. As of the 2018–19 school year, the district, comprised of two schools, had an enrollment of 1,014 students and 78.0 classroom teachers (on an FTE basis), for a student–teacher ratio of 13.0:1. Schools in the district (with 2018–19 enrollment data from the National Center for Education Statistics) are Memorial School with 352 students in pre-kindergarten through second grade and Washington Park School with 626 students in grades three through eight.

For ninth through twelfth grades, public school students attend Passaic Valley Regional High School, which also serves students from Little Falls Township and Woodland Park (formerly West Paterson). The high school facility is located in Little Falls Township. As of the 2018–19 school year, the high school had an enrollment of 1,186 students and 102.0 classroom teachers (on an FTE basis), for a student–teacher ratio of 11.6:1. The seats on the high school district's nine-member board of education are allocated based on the population of the constituent municipalities, with three seats assigned to Totowa.

The Academy of St. Francis of Assisi is a K-8 Catholic school that operates under the supervision of the Roman Catholic Diocese of Paterson.

People who were born in, residents of, or otherwise closely associated with Totowa include:

All content from Kiddle encyclopedia articles (including the article images and facts) can be freely used under Attribution-ShareAlike license, unless stated otherwise. Cite this article:
Totowa, New Jersey Facts for Kids. Kiddle Encyclopedia.