The initial patent for the land that would become Bloomfield Township was granted to the English Puritan colonists of Newark, and the area assigned to Essex County in 1675, and Newark Township in 1693. From the 1690s to about the 1720s, much of the northern and eastern land was sold to descendants of New Netherland colonists who had settled Acquackanonk, and the remainder mostly to English families. Speertown (now Upper Montclair), Stone House Plains (now Brookdale), and Second River (now Belleville) were essentially Dutch, while Cranetown, Watsessing, and the Morris Neighborhood (now North Center) were predominantly English. Starting in the mid-18th century, the English and Dutch neighborhoods gradually integrated, with Thomas Cadmus being among the first Dutchmen to settle in an English neighborhood.

Numerous residents served in the Revolutionary War. No significant engagements occurred in Bloomfield, although the locale was on the Continental Army's retreat route after the Battle of Long Island; British and American troops conducted foraging operations; and General George Washington is believed to have visited at least two residences. The Green was set aside to commemorate the use of that space for drilling of militia. 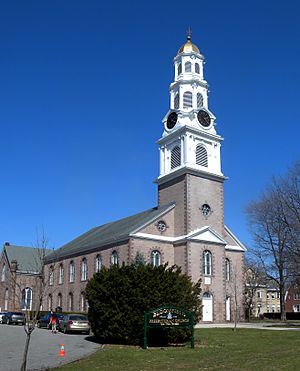 Presbyterian Church, for which the township was named

The Presbyterian Society of Bloomfield (now the Bloomfield Presbyterian Church on the Green) was formed in 1794 in honor of then-brigadier Joseph Bloomfield, commander of New Jersey troops in the Whiskey Rebellion. About the same time, the Dutch Reformed Church of Stone House Plains (now Brookdale Reformed Church) was established. The two churches became integral institutions of southern and northern Bloomfield, respectively.

Bloomfield was incorporated as a township from portions of Newark Township by an act of the New Jersey Legislature on March 23, 1812. At the time, the Presbyterian parish's namesake was governor of New Jersey and had recently been appointed brigadier general for service in the looming War of 1812.

At the time it was incorporated, the township covered 20.52 square miles (53.1 km2) (almost four times its current area of 5.3 square miles (14 km2)) and included several municipalities which were formed from portions of Bloomfield during the course of the nineteenth century, including Belleville (created on April 8, 1839), Montclair (April 15, 1868), Woodside Township (March 24, 1869) and Glen Ridge (February 13, 1895). The Stone House Plains neighborhood was renamed as Brookdale in 1873. 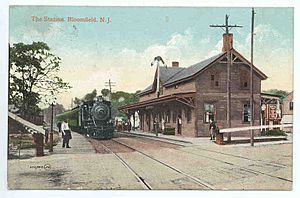 In the township's first century, Brookdale farms thrived while southern Bloomfield industrialized, and the township's infrastructure, civil framework and social institutions developed. Several miles of the Morris Canal passed through Bloomfield. The Oakes woollen mill thrived as a major supplier to the Union army.

In the 20th century, GE, Westinghouse and Schering built major facilities, and among others, the Charms Candy Company was started and grew. After World War I, Brookdale's farms were developed into residential neighborhoods and supporting services. Substantial population growth continued into the 1950s. During World War II, while many Bloomfield men served in the armed forces, Bloomfield's farms and factories, largely staffed by women, supported the war effort. In the decades after the war, the township's industrial base steadily shut down with stricter environmental regulations, rising labor costs, and growing competition. These influences, as well as construction of the Garden State Parkway, further drove urban decay and related population turnover and stagnation through the latter part of the 20th century.

In the early 21st century, redevelopment of blighted and underutilized properties has further shifted Bloomfield towards being a primarily residential municipality.

Silver Lake (2010 total population of 4,243) is an unincorporated community and census-designated place (CDP) defined by the United States Census Bureau as of the 2010 Census that is split between Belleville (with 3,769 of the CDP's residents) and Bloomfield (474 of the total). Brookdale (2010 population of 9,239) is a CDP located entirely within Bloomfield.

Other unincorporated communities, localities and place names located partially or completely within the township include Halycon and Watsessing.

In comparison to the other municipalities in the U.S., the cost of living in Bloomfield was an average 20% higher than the U.S. average.

Brookdale Park, established in 1928, covers over 121 acres (49 ha) in Bloomfield and Montclair, making it the third-largest park in Essex County, of which 77 acres (31 ha) are in Bloomfield. Watsessing Park, which is the county's fourth-largest park, covers 69.67 acres (28.19 ha) split between Bloomfield and East Orange (60 acres (24 ha) in Bloomfield), and features sections of the Second River and Toney's Brook flowing through the park. Both parks are administered by the Essex County Department of Parks, Recreation, and Cultural Affairs.

The major New Jersey highway artery that serves Bloomfield is the Garden State Parkway, the longest road in the state. It has four interchanges in the township. Interchanges 148 in the south of Bloomfield and 151 in the north are complete interchanges, while 149 and 150 are partials. The Parkway's Essex toll plaza is southbound just south of interchange 150 in the township. There are two service areas on the Parkway in Bloomfield, one for northbound and one southbound. Troop E of the New Jersey State Police, which patrols the full length of the Garden State Parkway, has a station in Bloomfield at northbound milepost 153.

South Bloomfield is served by two stations of the NJ Transit Montclair-Boonton Line to Hoboken Terminal or to Penn Station in Midtown Manhattan via the Secaucus Junction. About 55% of the weekday trains terminate in Penn Station via Midtown Direct. On weekends the line terminates in Hoboken. The Bloomfield train station is located off of Bloomfield Avenue in the downtown area. The Watsessing Avenue station is at the corner of Watsessing Avenue and Orange Street, and is located below ground.

Bloomfield used to be served by other passenger rail lines. The Rowe Street station was served by the Boonton Line until September 2002, when it was closed as part of the addition of Midtown Direct service to the township. The Walnut Street station, on the same line, was closed in 1953 when the Garden State Parkway was built through it.

The Grove Street station on the Newark City Subway line of the Newark Light Rail at the south end of Bloomfield provides service to Newark Penn Station, created as part of an extension to Belleville and Bloomfield that opened in 2002. This station was part of the Orange Branch of the New York & Greenwood Lake Service of the Erie Railroad with service to Jersey City which last saw service in 1955.

Saint Thomas the Apostle Parish School, which serves grades K-8, is operated under the supervision of the Roman Catholic Archdiocese of Newark.

Bloomfield College, a liberal arts college founded in 1868, is in downtown Bloomfield near the town green. The college has approximately 2,000 students and is affiliated with the Presbyterian Church.

All content from Kiddle encyclopedia articles (including the article images and facts) can be freely used under Attribution-ShareAlike license, unless stated otherwise. Cite this article:
Bloomfield, New Jersey Facts for Kids. Kiddle Encyclopedia.