Brookdale is an unincorporated community and census-designated place (CDP) in Bloomfield Township, located within Essex County, New Jersey, United States. It is generally considered to be the part of Bloomfield north of Bay Avenue, As of the 2010 United States Census, the CDP's total population was 9,239.

The original English name of Brookdale was Stone House Plains. "Stone House" referred to a rock formation known as the stone house or great rock, supposed to have been suitable as a shelter, just north of the present-day intersection of Bellevue Avenue and Newell Drive. The rock was still present in 1802, but removed not long afterward. "Plains" referred to the plains of the segment of the Yantecaw River which passes through the area. 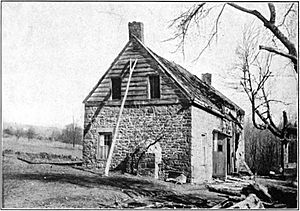 As early as 1691, settlers, possibly including Abraham Van Giesen, had begun to populate the area along Bellevue Avenue. By about 1750, two brothers, Garrabrant and Teunis Garrabrant, born 1723 and 1726, respectively in Bergen (now Jersey City), sons of Cornelius and Jannetje (Pier) Gerbrandsen, owned sizeable tracts in the vicinity of Brookdale Park, Bellevue Avenue and Broad Street. About 1730 Alexander Cockefair, born about 1696 in Bushwick, purchased a "plantation" roughly bounded by the Yantecaw River and modern-day Broad Street and Watchung Avenue. The Sigler and Coeyman families also had very early farms in Stone House Plains. Descendants of these families operated farms, mills and other businesses in the area for over two centuries.

Dutch was the primary language for many residents through the 18th century. In 1795, the Dutch Reformed Church of Stone House Plains (now Brookdale Reformed Church) was formed, creating a spiritual and social focal point for the community. The original church edifice was built in 1802; it burned and was rebuilt about 1857. The Morris family, which operated mills just south of Brookdale, made a mill pond on the Yantecaw River. In the mid-1800s, residents established the first school. In 1873, on the eve of US mail delivery service, the community voted to change the name to Brookdale.

After World War I, much of the farmland was developed into residential housing. The Clark Thread Company bought the Morris pond (now Clark's Pond) and built an adjoining thread-coloring factory, later occupied by the Scientific Glass Company. Portions of the Cockefair farm were converted to golf course and a junior high school (now Bloomfield Middle School). Essex County acquired and built Brookdale Park. In 1968, petrochemical engineering firm Lummus Company set up in northern Brookdale.

There were 3,445 households out of which 32.3% had children under the age of 18 living with them, 62.1% were married couples living together, 10.0% had a female householder with no husband present, and 25.1% were non-families. 20.1% of all households were made up of individuals, and 9.2% had someone living alone who was 65 years of age or older. The average household size was 2.68 and the average family size was 3.13.

All content from Kiddle encyclopedia articles (including the article images and facts) can be freely used under Attribution-ShareAlike license, unless stated otherwise. Cite this article:
Brookdale, New Jersey Facts for Kids. Kiddle Encyclopedia.