What is now Nutley was originally incorporated as Franklin Township by an act of the New Jersey Legislature on February 18, 1874, from portions of Belleville Township. Nutley was incorporated as a Town on March 5, 1902, replacing Franklin Township. In 1981, the town was one of seven Essex County municipalities to pass a referendum to become a township, joining four municipalities that had already made the change, of what would ultimately be more than a dozen Essex County municipalities to reclassify themselves as townships in order take advantage of federal revenue sharing policies that allocated townships a greater share of government aid to municipalities on a per capita basis.

Nutley derived its name from the estate of the Satterthwaite family, established in 1844, which stretched along the Passaic River and from an artist's colony in the area.

New Jersey Monthly magazine ranked Nutley as its 38th best place to live in its 2008 rankings of the "Best Places To Live" in New Jersey. 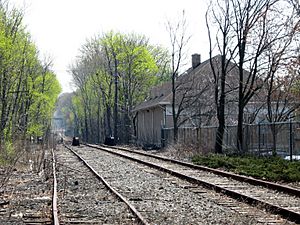 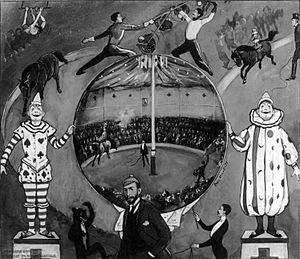 Annie Oakley performing at an amateur circus at Nutley in 1894, to raise funds for the Red Cross

Nutley grew slowly as Newark developed. The first European settler in the area, recorded in the minutes of a Newark town meeting in 1693, was a Dutch painter named Bastian Van Giesen. His house, known as Vreeland Homestead, still stands today on Chestnut Street and is the location of the Nutley Women's Club. John Treat and Thomas Stagg purchased lots adjacent to Van Geisen's in 1695 and 1698 respectively. The Van Riper House is another building from the era.

The first brownstone quarry in Nutley is believed to have been in operation by the early 18th century and was the town's first major industry. Jobs at the brownstone quarry in the Avondale section of Nutley provided work for many Italian and Irish immigrants. Mills situated along the Third River in the area now known as Memorial Park I became Nutley's second major industry.

John and Thomas Speer, Joseph Kingsland, and Henry Duncan all operated mills in the town during the 1800s. Current streets in Nutley are named after these mill owners. Henry Duncan built several mills throughout the town and established the village of Franklinville consisting of 30 homes and a few small businesses which later became the center of Nutley. One of Duncan's buildings has been modified and now serves as the town hall. Kingsland Manor is a national historic place.

During the late 1880s, painter Frank Fowler founded an artists' colony on The Enclosure, a dead-end street that is near the Third River, a stream that runs through the town's parks. Later artist residents of the street included Frederick Dana Marsh, Reginald Marsh and muralist Michael Lenson. Gary T. Erbe, a Trompe-l'œil painter, currently resides there.

Several other historical works on Nutley have been written by local historians, notably the late Ann Troy's Nutley: Yesterday - Today; "Nutley" by Marilyn Peters and Richard O'Connor in the "Then and Now" series; and books about the Nutley Velodrome. Local resident Chris Economaki wrote extensively about the Nutley Velodrome in his autobiographical racing history Let Them All Go! as the Velodrome was the first racetrack he had visited as a child.

Unincorporated communities, localities and place names located partially or completely within the township include Avondale, Franklin, Glendale and Younticaw.

The township borders Belleville and Bloomfield in Essex County; Lyndhurst in Bergen County; and Clifton in Passaic County.

As of the 2000 Census, 36.0% of town residents were of Italian ancestry, the 12th-highest percentage of any municipality in the United States, and fifth-highest in New Jersey, among all places with more than 1,000 residents identifying their ancestry.

The Garden State Parkway clips the southwest corner of the township, entering in the south from Bloomfield before reentering Bloomfield in the north. Route 21 follows the township's eastern border.

NJ Transit provides bus service between the township and the Port Authority Bus Terminal in Midtown Manhattan on the 192 route, to Newark on the 13, 27, 72 and 74 routes, with local service on the 709 route.

Until 1966, the Newark Branch of the Erie-Lackawanna Railroad served the township.

After Hurricane Katrina devastated the central gulf coast region on August 29, 2005, Mayor Joanne Cocchiola and Commissioner Carmen A. Orechio reached out to local residents who wanted to help victims of the devastation, and formed the Operation Nutley Cares Committee. A decision was made to adopt Bay St. Louis, Mississippi as a sister city, Bay St. Louis, population 8,500, which sits just northeast of New Orleans, and had at least 60% of the community completely destroyed by Katrina and another 20% condemned. Monetary donations are still being accepted to help fund efforts to assist Bay St. Louis.

All content from Kiddle encyclopedia articles (including the article images and facts) can be freely used under Attribution-ShareAlike license, unless stated otherwise. Cite this article:
Nutley, New Jersey Facts for Kids. Kiddle Encyclopedia.