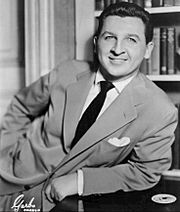 Edward Vincent "Eddie" Bracken (February 7, 1915 – November 14, 2002) was an American movie, television, stage, radio, voice actor, and comedian. He was known for his roles in The Miracle of Morgan's Creek, Fun on a Week-end, Baby's Day Out, Home Alone 2: Lost in New York, and in We're Not Married!.

All content from Kiddle encyclopedia articles (including the article images and facts) can be freely used under Attribution-ShareAlike license, unless stated otherwise. Cite this article:
Eddie Bracken Facts for Kids. Kiddle Encyclopedia.