Alpine is a borough in Bergen County, New Jersey, United States. It is a suburb of New York City, located 15 miles (24 km) north of Midtown Manhattan. Alpine is the easternmost community in the state of New Jersey.

New Jersey Monthly magazine ranked Alpine as its 15th best place to live in its 2008 rankings of the "Best Places To Live" in New Jersey.

Alpine was formed by an act of the New Jersey Legislature on April 8, 1903, from portions of Harrington Township. The borough acquired a portion of Cresskill in 1904. The borough's name came from the wife of journalist Charles Nordhoff, who found the setting reminiscent of the Swiss Alps. 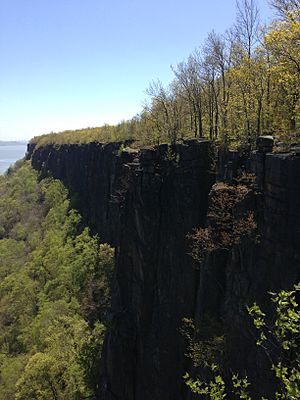 There were 611 households out of which 32.9% had children under the age of 18 living with them, 73.8% were married couples living together, 8.2% had a female householder with no husband present, and 13.4% were non-families. 11.8% of all households were made up of individuals, and 4.9% had someone living alone who was 65 years of age or older. The average household size was 3.03 and the average family size was 3.24.

Same-sex couples headed four households in 2010, down from the eight counted in the 2000 Census.

Rockland Coaches provides service along Route 9W to the Port Authority Bus Terminal in Midtown Manhattan on the 9T / 9AT routes and to the George Washington Bridge Bus Terminal on the 9 and 9A routes.

Rio Vista is an upscale neighborhood in the southern section of Alpine. Rio Vista is home to Devil's Tower, a stone clock tower that was originally designed by Charles Rollinson Lamb for sugar baron Manuel Rionda (1854–1943) in order to allow his wife to see New York from the New Jersey side of the Hudson River.

The New Jersey Section of the Palisades Interstate Park runs the length of Alpine along the top of the New Jersey Palisades and along the Hudson River. The Alpine Boat Basin serves as both a public picnic area and small marina for private boats. The area is a scenic riverfront picnic area and boat basin, plus beach for car-top boat launches (canoe and kayak), with fishing, access to hiking trails and Henry Hudson Drive, restrooms, water, vending machines, and public phones. Alpine Pavilion, an open-air stone picnic pavilion built in 1934 by the Civil Works Administration and available for rental is located here, as well as the historic Blackledge-Kearney House, said to be the site where Lord Cornwallis and his troops landed on November 20, 1776, in their pursuit of the Continental Army following the rout of George Washington's forces in the Battle of New York.

All content from Kiddle encyclopedia articles (including the article images and facts) can be freely used under Attribution-ShareAlike license, unless stated otherwise. Cite this article:
Alpine, New Jersey Facts for Kids. Kiddle Encyclopedia.