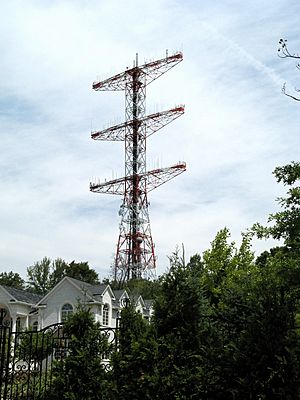 The tower is the permanent transmitter site for locally based experimental station WA2XMN and Fairleigh Dickinson University's educational FM station WFDU, in additional to numerous directional radio services (including as a cell site). It is clearly visible from across the Hudson River and is used as a Visual flight rules waypoint by aircraft flying within the New York City Special flight rules area.

The tower was originally constructed by inventor Edwin Howard Armstrong in 1938 for developmental activities that led to modern FM radio. The original transmissions (W2XMN) occurred at 42.8 MHz. At the tower base is a building originally used for research by Armstrong, which still has the W2XMN call sign engraved above its main entrance. This building currently houses the Armstrong Field Laboratory, and serves as a museum containing artifacts from the development of FM radio technology.

The structure was also used as a temporary transmitter site for some of New York City's television stations after the collapse of the World Trade Center, including its transmitting antenna, during the September 11, 2001 attacks.

All content from Kiddle encyclopedia articles (including the article images and facts) can be freely used under Attribution-ShareAlike license, unless stated otherwise. Cite this article:
Armstrong Tower Facts for Kids. Kiddle Encyclopedia.