The Lenni Lenape Native Americans tilled the soil, hunted in the woods, and fished in the rivers and streams before the Dutch arrived in the early 18th Century. The Dutch settlers, though, left an indelible mark on the area. Early records show that after the English takeover of New Netherland, English Governor Philip Carteret in 1669 granted a real estate speculator named Balthaser De Hart a strip of property which extended east and west from the Hudson River to the Tiena Kill, and north and south from today's Cresskill into Palisades, New York. It is within these geographical boundaries that lies what is now known as Closter. The northern half of this tract of land consisting of 1,030 acres (420 ha) (extending from what is Closter Dock Road northward) was purchased by Barent and Resolvert Nagel on April 25, 1710, who along with the Vervalen family first settled what is now Closter.

The name Closter is of Dutch origin and first appears in 1745, when Arie Arieaense purchased "A certain tract of land lying on Tappan in Orange County and in the province of New York at a certain place called Klooster" (At that time, Closter was considered part of New York State). In the Dutch language, Klooster means "a quiet place, a monastery or cloister." This location was a quiet place in 1710 when the Nagel brothers first settled it, with very few people in the immediate area. The topography gave a sense of isolation and protection, tucked behind the highest point of the Palisades and protected by limited access. Alternatively, sources indicate that the name derives from an early settler named Frederick Closter. The name was originally pronounced with an "ow" sound, phonetically, "Klowster."

Later, just before the American Revolution, these isolated settlers began to feel the imposing hand of the British Crown in their lives – not only in governmental affairs but also by the influx of English culture upon their own language and culture. And as a result the "K" in Klooster was dropped and was replaced with a "C" so the now growing village became known as Clooster.

By 1795, with the emerging new American culture, the second "o" in Clooster was dropped, and the American English "long o" sound was adopted which led to today's pronunciation of Closter.

The arrival of the Northern Branch in 1859, followed by additional train service from what became the West Shore Railroad, brought residents to the community who could commute to Manhattan via the ferry across the Hudson River at the railroad's Weehawken depot. Closter's central location earned it the nickname "Hub of the Northern Valley".

After the turn of the 20th century, Closter changed from being sprawling estates and farms into an upper middle class suburban town.

There were 2,747 households out of which 43.4% had children under the age of 18 living with them, 73.2% were married couples living together, 8.4% had a female householder with no husband present, and 15.3% were non-families. 12.9% of all households were made up of individuals, and 7.3% had someone living alone who was 65 years of age or older. The average household size was 3.02 and the average family size was 3.30.

Korean Americans accounted for 21.2% of the population. 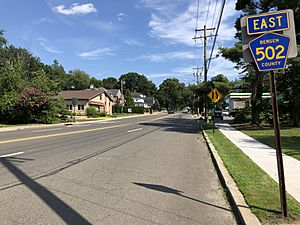 Closter can also be reached via the Palisades Interstate Parkway and U.S. Route 9W, which pass through adjacent municipalities.

The NJ Transit 167 and 177 bus routes provide service along Schraalenburgh Road to the Port Authority Bus Terminal in Midtown Manhattan.

The Closter Public Schools serve students in pre-kindergarten through eighth grade. As of the 2018–19 school year, the district, comprised of two schools, had an enrollment of 1,203 students and 94.5 classroom teachers (on an FTE basis), for a student–teacher ratio of 12.7:1. Schools in the district (with 2018-19 enrollment data from the National Center for Education Statistics) are Hillside Elementary School with 682 students in grades PreK-4 and Tenakill Middle School with 511 students in grades 5–8.

People who were born in, residents of, or otherwise closely associated with Closter include:

All content from Kiddle encyclopedia articles (including the article images and facts) can be freely used under Attribution-ShareAlike license, unless stated otherwise. Cite this article:
Closter, New Jersey Facts for Kids. Kiddle Encyclopedia.