Norwood was formed as a borough by an act of the New Jersey Legislature on March 14, 1905, from portions of Harrington Township.

The territory comprising Norwood was originally settled about 1670 by a dozen or more families mostly from the Dutch Republic, who purchased the land under the Tappan Patent. About that time a grant was also given by Philip Carteret, Governor of the Province of East Jersey, during the reign of King Charles II of England. The Lenni Lenape Native Americans roamed the valley.

The name Norwood emanated from the old description of its location in the "North-Woods". It was a part of Harrington Township, which was formed in 1775 from the northernmost portions of Hackensack Township and New Barbadoes Township, stretching from the Hudson River in the east to the Saddle River in the west.

On March 14, 1905, Norwood seceded from its parent Harrington Township and was incorporated as an independent borough.

Norwood is in the northeastern part of New Jersey, about 2 miles (3 km) from the New York state line. It is bordered by the boroughs of Northvale, Old Tappan, Harrington Park, Closter, Alpine and Rockleigh.

Unincorporated communities, localities and place names within the borough include West Norwood. 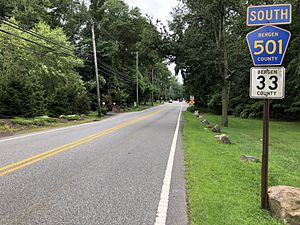 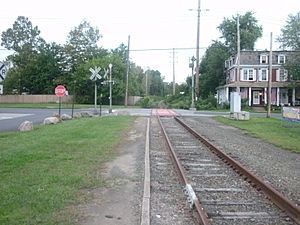 The site of the former Erie Railroad station in Norwood on September 11, 2011

The forests in Norwood house many deciduous species, sheltering deer, wild turkey, turtles, foxes, rabbits, wolves, and even coyote. Suburban sprawl is beginning to interfere with the wildlife. Deer and auto collisions as well as coyote and human interaction is a problem. Wolves have never been seen in Norwood.

The Norwood Public School District serves students in kindergarten through eighth grade at Norwood Public School. As of the 2018–19 school year, the district, comprised of one school, had an enrollment of 618 students and 48.5 classroom teachers (on an FTE basis), for a student–teacher ratio of 12.7:1.

People who were born in, residents of, or otherwise closely associated with Norwood include:

All content from Kiddle encyclopedia articles (including the article images and facts) can be freely used under Attribution-ShareAlike license, unless stated otherwise. Cite this article:
Norwood, New Jersey Facts for Kids. Kiddle Encyclopedia.