The borough borders Norwood, Old Tappan and Rockleigh in Bergen County and Tappan (in the Town of Orangetown) in Rockland County, New York.

There were 1,564 households out of which 38.7% had children under the age of 18 living with them, 67.8% were married couples living together, 10.0% had a female householder with no husband present, and 19.1% were non-families. 16.3% of all households were made up of individuals, and 8.8% had someone living alone who was 65 years of age or older. The average household size was 2.96 and the average family size was 3.32. 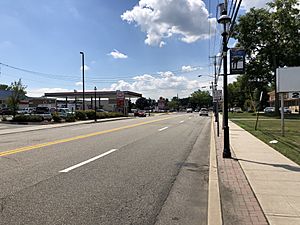 The television show Ed, which ran from 2000–04, was filmed in Northvale. The interior and exterior shots for "Stuckeybowl" were filmed at the now closed and demolished bowling alley, formerly known as "Country Club Lanes". Housing for seniors ages 55+ now exists on the site.

Haring-Blauvelt House was built in 1810 and was added to the National Register of Historic Places on January 10, 1983.

The Northvale Public Schools serve students in kindergarten through eighth grade at Northvale Public School. Students from Rockleigh, a non-operating school district, attend the Northvale district as part of a sending/receiving relationship. As of the 2018–19 school year, the district, comprised of one school, had an enrollment of 534 students and 47.0 classroom teachers (on an FTE basis), for a student–teacher ratio of 11.4:1. In the 2012–13 school year, Thomas Jefferson School (for grades K-4) and Nathan Hale School (for grades 5–8) were combined to create the Northvale Public School, as part of an effort to reduce costs associated with running two separate schools that shared a common campus and corridor.

People who were born in, residents of, or otherwise closely associated with Northvale include:

All content from Kiddle encyclopedia articles (including the article images and facts) can be freely used under Attribution-ShareAlike license, unless stated otherwise. Cite this article:
Northvale, New Jersey Facts for Kids. Kiddle Encyclopedia.