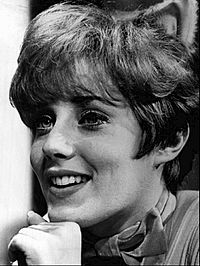 Lesley Gore (May 2, 1946 – February 16, 2015) was an American singer, actress, and feminist. She has had many hit songs. She is especially known for her hit single "It's My Party". Gore was also an actress and she appeared as a Catwoman sidekick in the 1960s television series Batman. During her career, she was nominated for a Grammy Award and an Academy Award.

Gore was born in Brooklyn, New York City. She raised in Tenafly, New Jersey. She studied at Dwight School for Girls. Gore was a lesbian and was in a 33-year relationship with Lois Sasson. Gore was Jewish.

Gore died of lung cancer at the age of 68 in Manhattan, New York City. Her death was confirmed by her partner Lois Sasson.

All content from Kiddle encyclopedia articles (including the article images and facts) can be freely used under Attribution-ShareAlike license, unless stated otherwise. Cite this article:
Lesley Gore Facts for Kids. Kiddle Encyclopedia.