Valley Cottage is a hamlet and census-designated place in the town of Clarkstown, New York, United States. It is located northeast of West Nyack, northwest of Central Nyack east of Bardonia, south of Congers, northwest of Nyack, and west of Upper Nyack. The population was 9,107 at the 2010 census.

According to the United States Census Bureau, the CDP has a total area of 4.3 square miles (11 km2), all land.

There were 3,347 households, out of which 30.4% had children under the age of 18 living with them, 60.3% were married couples living together, 8.0% had a female householder with no husband present, and 28.9% were non-families. Of all households, 23.8% were made up of individuals, and 6.6% had someone living alone who was 65 years of age or older. The average household size was 2.66 and the average family size was 3.2. 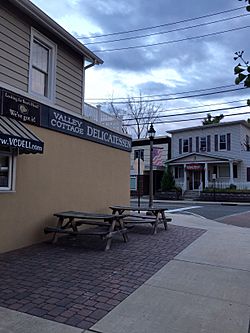 The first known resident of Valley Cottage was John Ryder, who owned a large farm which comprised all or most of the area's school district.

The post office was first opened at the Valley Cottage Station in 1892.

According to George H. Burke's book Rockland County during the American Revolution, 1776–1781, Valley Cottage was once known as "Storm's Corner". In 1876, just before the opening of the West Shore Railroad station, the residents assembled at the school room agreed on the name "Valley Cottage", referring to the house nearest the station "that cottage in the valley". Another version has it that the name of the hamlet came about because of a famous trotting horse named "Cottage Maid", owned by Ed Green who owned the land where the station, the Marcus store and other buildings stood. 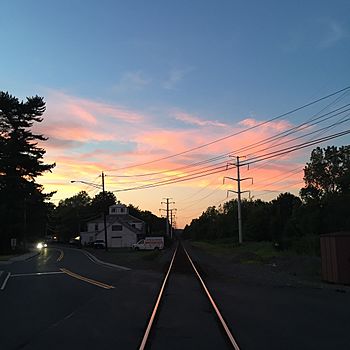 Commuter transportation to New York City is provided by Rockland Coaches Route 9A to the George Washington Bridge Bus Terminal and Route 9T to the Port Authority Bus Terminal from the bus shelters at the intersection of Lake Road and New York State Route 303. The shelters are a 0.4 mile walk from the hamlet's Park and Ride facility. Local bus transportation is operated by Transport of Rockland's Route 91 & 97 and Clarkstown Mini-Trans Route A.

Markers at Rockland Lake and Hook Mountain were unveiled on October 4, 2008.

All content from Kiddle encyclopedia articles (including the article images and facts) can be freely used under Attribution-ShareAlike license, unless stated otherwise. Cite this article:
Valley Cottage, New York Facts for Kids. Kiddle Encyclopedia.