Palisades Center in West Nyack, New York, is the second-largest shopping mall in the New York metropolitan area, the eighth-largest in the United States by total area, and sixth-largest by gross leasable space. Built in the industrial style, the mall houses 218 stores and receives 20 million visitors a year. It is also one of the nation's most lucrative malls, producing $40 million in annual sales tax and $17 million in property taxes.

Developed by The Pyramid Companies, and opened in 1998, the mall was named after the nearby Palisades, which border the Hudson River and the eastern part of Rockland County. The mall is bounded on three sides by major state routes: the New York State Thruway (Interstates 87 and 287) to the north (Exit 12), NY Route 303 to the east, and NY Route 59 to the south. It is also located near the Thruway's intersection of the Palisades Interstate Parkway, and is only a few miles west of the Tappan Zee Bridge, which provides access from points east of the Hudson River. 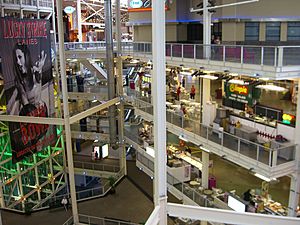 According to the mall's sponsoring partner, Thomas Valenti, it took 16 years to get the mall approved and built. The 130-acre site was purchased by The Pyramid Companies for about $3 million and a promise to clean up the two landfills, which were filled with incinerator ash and garbage. The 875,000-square-foot mall was proposed in 1985 with a goal of luring upscale retailers such as Saks Fifth Avenue and Lord & Taylor, and also a promise to keep sales tax dollars from slipping across state lines into New Jersey. The site was selected for its proximity to the New York State Thruway and Westchester County. Its location four miles from New Jersey, where blue laws in Paramus keep the malls closed on Sundays, was also a factor. Local residents, recalling how the Nanuet Mall nearly drew the life out of Rockland County's traditional shopping villages about 20 years earlier, opposed the mall, predicting that it would bring crime, increased traffic, air pollution, and an economic downturn to the area's downtowns, and that the site was not properly tested for toxins. Ground was broken on the project in October 1993. The mall cost between $250 million and $280 million to build. 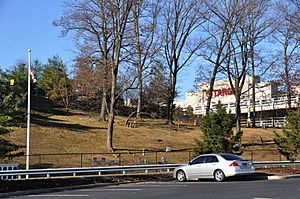 The Mount Moor Cemetery. The mall is visible to the right.

The Palisades Center was built around the Mount Moor Cemetery, a 150-year-old cemetery for African Americans established in 1849 for people of color, including Native American and African American veterans of American wars from the Civil War to the Korean War. The cemetery is visible from a number of points in the mall, and was undisturbed by construction.

The Historical Society of Rockland County placed a historical sign which reads:

This burying ground for Colored people, was deeded on July 7, 1849 by James Benson. and Jane Benson. his wife to William H. Moore, Stephen Samuels and Isaac Williams. trustees. The cemetery has provided burial space for colored people, including veterans of the American Civil War, the Spanish–American War, World Wars l and ll and the Korean War. The grounds have been maintained since 1940 by the Mount Moor Cemetery Association, Inc.

The construction of the mall faced a number of environmental obstacles before it began. What was initially thought to be a mastodon buried there turned out to be a circus elephant. Nesting grounds for a nearly extinct red-legged partridge turned out to be a domesticated pheasant. Other problems included flooding from one of the region's glacier-dug bottom spots and runoff from three landfills on the property.

The mall finished construction in December 1997 and opened in March 1998. Initially the mall had four anchor stores; the number fluctuated over the years as new anchors opened and closed, reaching 16 at its peak in the 2010s.

From its inception, rumors circulated that the mall's underground parking lot was sinking because it was built on unstable swampland, and that it would collapse under its own weight.

Rumors that the mall would close abounded after the 1999-2000 holiday season.

On the January 6, 2000, episode of The Rosie O'Donnell Show, host Rosie O'Donnell, who lives in Nyack, mentioned the rumor of the building's sinking to her audience. Local police, town engineering officials and the mall's developers assured the public that there was no truth to these stories and that the mall was safe and in no danger of closing. A managing partner of the mall, Thomas J. Valenti, appeared on a later episode of O'Donnell's show, performing a song-and-dance number to the tune of "Cheek to Cheek" to debunk the rumors of the mall sinking.

On November 5, 2002, voters in Clarkstown approved the mall's leasing of 100,000 square feet of unoccupied space, in keeping with a 1997 covenant in which Pyramid Companies agreed any additional leasing would be decided by a town referendum as part of a deal that let the mall take over three town streets. Opponents argued that Pyramid Companies had previously insisted that this space had no practical use when they had built beyond the original 1.8 million square feet they were allowed, but Pyramid insisted that they did not wish to expand beyond the limits of the mall, but rather to lease space already in the building, which would be occupied by Kids City, an educational and recreational center for children ages 3 to 12. Nicole Doliner, president of the Rockland Civic Association, characterized Kids City as a "theme park."

In 2008, opponents of the mall complained that the Superfund site located on the property was paved over rather than cleaned and that the mall tax receipts failed to lower the average homeowner's bill as advertised. "Everything we said would happen happened. Go back and look at all the proposals and drawings. It's a vastly different mall that was built. It was sold as upscale. What they built is arguably one of the ugliest malls in America." Mall opponent Bruce Broadley said in the 2008 documentary Megamall. However, Clarkstown Town Board member Shirley Lasker, who opposed the mall, said in 2008 that the board's concerns over traffic did not materialize. Valenti said that the $23-million effort to fix area roads and create a special exit for the mall on the Thruway prevented the predicted traffic congestion. Columnist Greg Clary argued that aesthetics are subjective, that average homeowners' bills did not go down due to continued spending by elected officials, and that while the downtowns were hurt by the mall, this is not unique to the area, and can be averted by town planners who represent some of the 20 million of the mall's patrons. New York Times writer Joe Queenan criticized the mall's Brutalist exterior as lacking design and theme and characterized its rectangular layout as "a series of interlocking coffins." He also criticized the "trash gondolas" visible near the Interstate 287 entrance. Queenan had kinder things to say about the mall's vast interior, likening its sprawling floors to a retail version of Centre Georges Pompidou, analogizing its amalgamated structure to the "Gotham skyline," and lauding the bowling alley, ice rink, and food court Ferris wheel for giving people an opportunity to play "adult hooky."

In 2009, the mall replaced an ancient 19th-century carousel from Venice, Italy, with a modern doubler-decker model.

On May 3, 2013, Pyramid officials announced that Palisades Center would get a multimillion-dollar makeover from May to December that year. The remodeling was intended to create a more sophisticated appearance to the mall, which had begun to show signs of wear and tear. The renovation brought a warmer color scheme to soften the institutional beige of the mall, colored glass mosaics, ceiling facets, and designer lighting. The four-story court at the center of the mall received glass handrails and architectural lighting elements, and the "ThEATery" area on Level 4 got new tile floors and chandelier fixtures. Other areas receivd soft seating, custom planters, and plush carpets.

In 2016, the mall was at full occupancy. In 2017 the mall's JCPenney store closed. In October 2019, Bed Bath & Beyond announced it would close the following June.

On April 18, 2020, Rockland County Business Journal reported that Pyramid was looking to sell the mall, which has become saddled with debt and whose occupancy dropped to 82% with the departures of Lord & Taylor, JCPenney, and Bed Bath & Beyond. The Journal cited a source at J.P. Morgan as saying that the bank hoped to foreclose on the mall by mid-summer if Pyramid Management Group, which had missed its most recent rent payment at the time, did not find a buyer. Several offers to purchase the mall were made by a number of owners, hedge funds, and New York real estate companies, including one from Triple Five, the company behind the Mall of America and the American Dream Meadowlands. Many of the offers were below the market value due to the COVID-19 pandemic in the United States, and the amount of debt incurred by the mall. The Palisades Center had been trying to develop a Hilton Hotel at the Lord & Taylor space before the pandemic, but according to the Journal, that project was not considered likely to proceed. 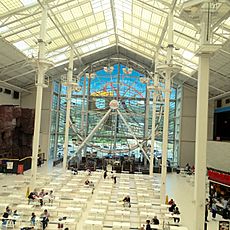 The mall has four floors, which at its opening housed over 220 businesses under a 1 million-square-foot roof, as well as 8,500 parking spaces on the property's 2-million-square-foot imprint, a space large enough to fit 40 White Houses. To accommodate its customers and tenants, the mall houses 40 escalators, eight passenger elevators, and 11 freight elevators.

The third floor of the mall contains a 2,000 seat food court with over a dozen quick-service restaurants, and a 60-plus-foot-tall Ferris wheel. That level formerly housed Philadelphia Toboggan Company Carousel Number 15, a carousel that was built in 1907, and listed on the National Register of Historic Places in 2001. In May 2009, mall management announced that the then-101-year-old carousel would be disassembled and removed the following month and was replaced by a modern double-decker Venetian carousel.

On the fourth floor is a stadium-seating 21-screen AMC Theatres, that includes a once-separate IMAX theater. Since 2016, the former IMAX site is home to 5 Wits Interactive Family Entertainment Center. At the east end of the fourth floor is an ice rink, which is home to many teams and programs such as the Palisades Predators Youth Hockey team and BUDS for Hockey. The rink also houses a free skate and Learn to Skate program, an arcade, and a party room for birthday parties. The fourth floor is also the entry to Palisades Climb Adventure, a five-level, 85-foot-tall climbing obstacle course created by WonderWorks that allows guests to climb on obstacles while strapped into a harness.

All content from Kiddle encyclopedia articles (including the article images and facts) can be freely used under Attribution-ShareAlike license, unless stated otherwise. Cite this article:
Palisades Center Facts for Kids. Kiddle Encyclopedia.