High Tor State Park is a 691-acre (2.80 km2) state park on the north edge of the Town of Clarkstown in Rockland County, New York, United States. The park is located on South Mountain, which has two peaks, High Tor and Little Tor. Its highest peak, High Tor, is 797 feet (243 m) high.

High Tor State Park is intended for day use during the summer months, and contains picnic tables, a pool and showers, hiking trails, and a food concession. The Long Path passes through the park. 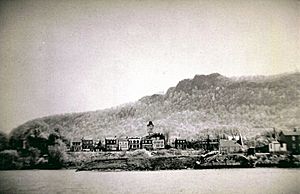 An early photograph from across the Hudson River looking toward the Village of Haverstraw and the High Tor and Little Tor peaks.

The park contains two peaks: High Tor at 797 feet (243 m), and Little Tor at 620 feet (190 m). They are the highest peaks in not only the park, but in all of the Hudson Palisades. The skyline of New York City can be seen from the summit of High Tor.

All content from Kiddle encyclopedia articles (including the article images and facts) can be freely used under Attribution-ShareAlike license, unless stated otherwise. Cite this article:
High Tor State Park Facts for Kids. Kiddle Encyclopedia.